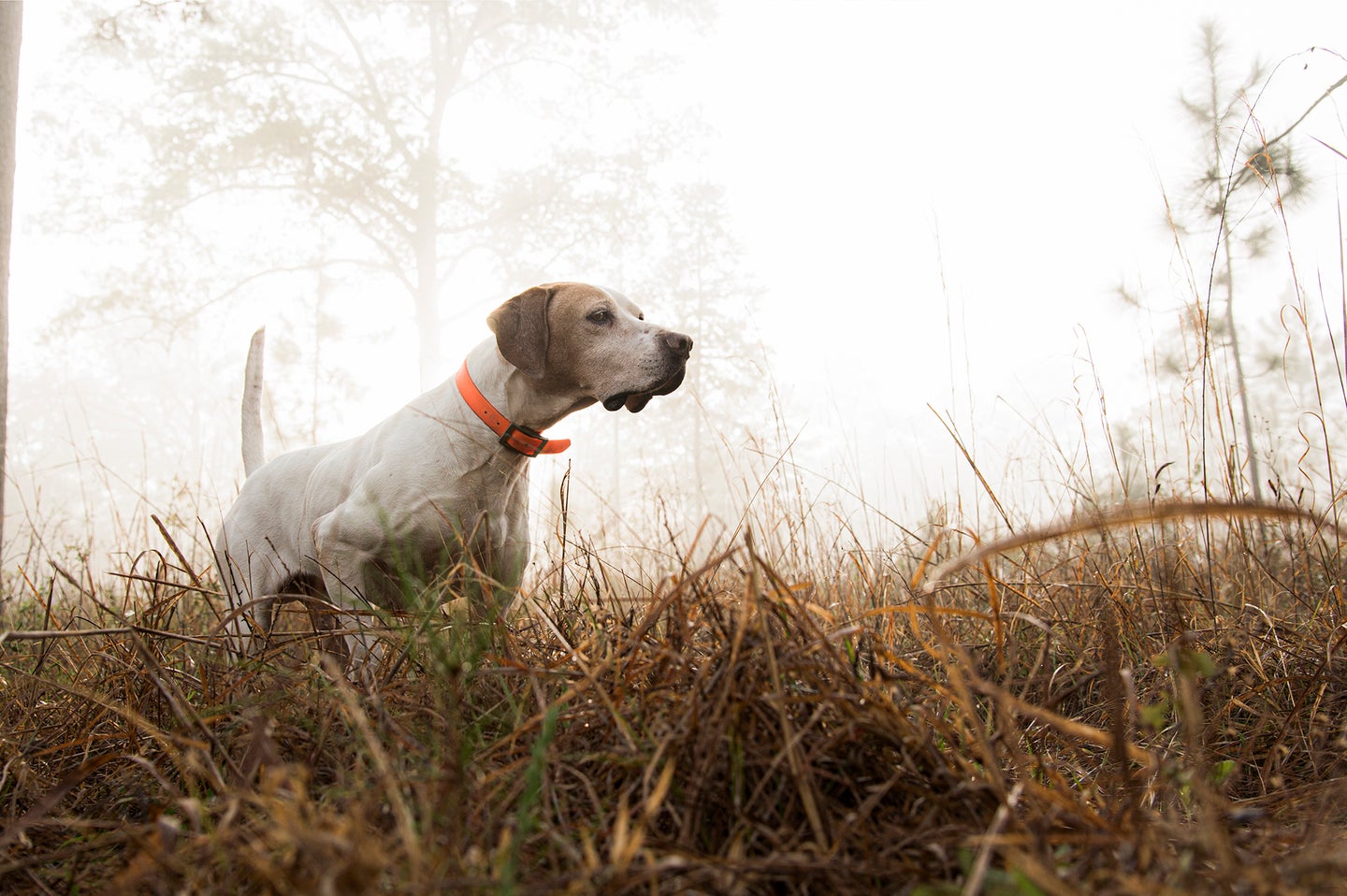 Choir in the Pines: The Dogmen of the South

Flushing bobwhites, laughter, and plenty of trash talk make up the song of the Red Hills

ANY GOOD SERMON about quail hunting in the South starts in the Red Hills surrounding Thomasville, Georgia, and includes three legendary dogmen: Neal Carter Sr., Curtis Brooks Sr., and Joe Fryson. Those three men are the lifeblood of the Ga-Fla Shooting Dog Handlers Club (commonly called the Black Handlers Club), which runs its big field trial annually on the first Monday of March. This field trial has run for 40 years and includes some 30 pointing-dog handlers from all over the country.

While you’ll see some truly incredible dog work (and some fine horse work too) at this field trial, it’s much more than a competition. It’s among these longleaf pines that we find a particular kind of sanctuary that nurtures the spirit of great bird dogs and the centuries-old traditions that the clubs seek to uphold.

In many ways, the bird dog tradition brings me to the memory of the singular institution to which my family has been so committed. I recall a holy day, once a week, when men and women congregated in worship of the gospel, and true to the roots of both traditions, there is one simple fact: Everybody sings in church.

At sunrise, bobwhite quail sing in the morning to open up Sunday service, and dogmen are the tenors of the Red Hills choir. My own dogs bark wildly, incessantly, their barks mixing in with our laughter as Joe Fryson’s voice rumbles through the woods at the beginning of each brace. Up till this point, Joe has handled great dogs, most from the Melrose Plantation, and he’s won our trial a record six times since its start back in 1981.

Quail habitat grows from the soot and ash of the seasonal prescribed burn that was conducted right before the wild birds started to pair off and lay the eggs that will hatch into the next brood. And we all drift to the slow-simmerin’ sway of the longleaf, burning hell hot, as old and young Black men watch, laugh, tell stories, and gamble on the other men’s purported “trash” dog work.

Not every dog is a perfect one, and some folks lie about why their dog never placed. There’s plenty of trash talk to go around. But then there are the absolute truths, the times when the gallery of spectators quiets down with reverence to watch a special dog work. Some dogs are a force in the woods, and some men command the energy of the field—no trash talk or mess about it. These bird dogs just “get it done” in the Red Hills, and the men who train them see to it that the dogs continue to do so, hunt to hunt, trial to trial, and litter to litter.

It’s here that I met Carter and dear friend Brooks Sr., and through our club’s trial, I was later connected to the greater history of Thomasville, Georgia. It was there that I met my buddy Terry James, who introduced me to his father and veteran dogman, Terry Chastain Sr.

All of these men are among the gilded gentry of the Red Hills’ bird dog mythos.

This area holds the largest concentration of undeveloped plantation land in the United States, and its rolling hills, live oak forests, and stands of longleaf pine have been designated as one of America’s Last Great Places by the Nature Conservancy. After the Civil War, many of the plantations here became winter homes and quail-hunting plantations for wealthy Northerners. But my people, the Black dogmen of the South, have been running their dogs here since well before that.

So I rock this afternoon to the drum of my own memory—the christening of my young pointer. Carter had held my young puppy in his tender, aged hands. Carter has 40-plus years of hands-on bird dog training experience, and I hoped that his touch would be the blessing that would translate to a win in the trial.

I would sit out the trial for a year to watch and learn, and to uncover more about my own special kinship to my culture’s tradition and history as I followed its thin yet everlasting thread through the fabric of bird dog history.

Through running dogs with Brooks Sr. and Carter, I’ve learned a great deal about my culture and the tradition of bird dogs, and I’ve modeled my own practices mostly around the teachings of both these gentlemen.

Over time, I’ve acquired three orange-and-white pointers, one from Curtis’ kennel and another from the famed Loveridge Plantation. This pup, now two years old, is my lead dog. My love for dog work has only grown, as Carter warned me it would. He knows too much about a bird dog, as did his grandfather before him, who, along with his peers, transcended racial barriers in the world of bird dog training.

These men would become the architects of a niche selection of class bird dogs. Many of the notions about what we consider a fine hunting dog stem from the pulpit, I imagine, because in this church, everyone sings together. In 2008, the gallery sang loudly when Carter, handling his dog Sinkola Hammer, took first place, with Ed Chance handling Cane Mill Sam in second and Terry Chastain bringing home third prize with Melrose Rebel Buck. Terry brought Buck back the following year to take first place at Seminole Plantation.

The qualities that I want in my own dogs are based mostly on the histories of the Georgia-Florida Field Trial Club’s centennial biography, narrated by Charlie Chapin himself, owner of Elsoma Plantation. Mr. Chapin is the third-generation owner of Elsoma, one of the notable plantations in Thomasville, dating from the early 20th century. His description of what the Georgia-Florida Field Trial Club looks for in a dog is now what I’m breeding for in my own Cha’Ann Kennels: It “seeks for its three winners ideal plantation shooting dogs, with great noses attested by bird finding, style, and perfect manners proved by being steady to wing and shot and backing on sight, and easy handling, always to the front, no yelling. Range to fit the terrain and the cover and uncommon bird sense mark the winners.”

In other words, the qualities that win the trial are bred into many of the fine bird dogs of the Red Hills. One such dog was Curtis Brooks’ English setter in the 2019 trial. The dog found two or three coveys of wild quail and pointed them with head and tail high, bone straight, ranging beautifully, cutting the red-tinted glare of the afternoon sun. This was a dog to be seen and remembered, and he is, in our stories, year after year.

We always came to church in our Sunday best, with a look-good-feel-good kind of mentality, and working a bird dog ain’t too much different. Take for example the famed mule-drawn wagon that has always been a staple of the Red Hills. I think about my own upbringing, decorated with box Chevys and the other classic American muscle cars that were a staple of Black communities in Atlanta, where I grew up. Both the mule-drawn wagon and a classic American muscle car indicate the driver’s personal tastes, customized for leisure and brought out only to steal the show on the most special of days.

And amid the mule-drawn wagon’s cargo sits a string of carefully bred and selected dogs that damn well might be considered as custom as the vehicle itself. Form follows function, as most wagons in the South were used simply as a means of covering ground during a hunt while ensuring some form of leisure and comfort. As the years passed, owners would invest more and more in the craftsmanship and decor of their wagons, pulling out all the stops for a hopefully showstopping performance from their prized bird dogs.

When it’s all over, all said and done, and the good dogs go back to the kennel, and the tired dogmen convene back at the club shed, I sit among them waiting for a new year. I’ve stood with Neal Carter Jr., with Curtis Brooks Sr., with Terry Chastain Sr. and Charlie Chapin, all of us looking along the horizon with aspirations as high as the flame of the burning pine. These men are the keepers of a long-standing tradition riddled with trial and tribulation.

Such men ran dogs together during even more tumultuous times in American history than we see today, and still they have found their way to common ground. They are the models for a new generation of dogmen like me and my peers. They inspire and challenge us toward the perfection of our craft. We love this place, its beauty, its mystique, and the spirit of the red clay. I’m still not sure what this trial and this culture really mean to me, but I do know this: The bobwhite quail of the Red Hills move just a little bit differently, and we hold a reverence for them, and this place, that lies somewhere between truth and belief.