Hit More Quail with These Close-Range Chokes, Loads, and Tactics

Inside of 25 yards, this deadly combination will knock down more birds and damage less meat 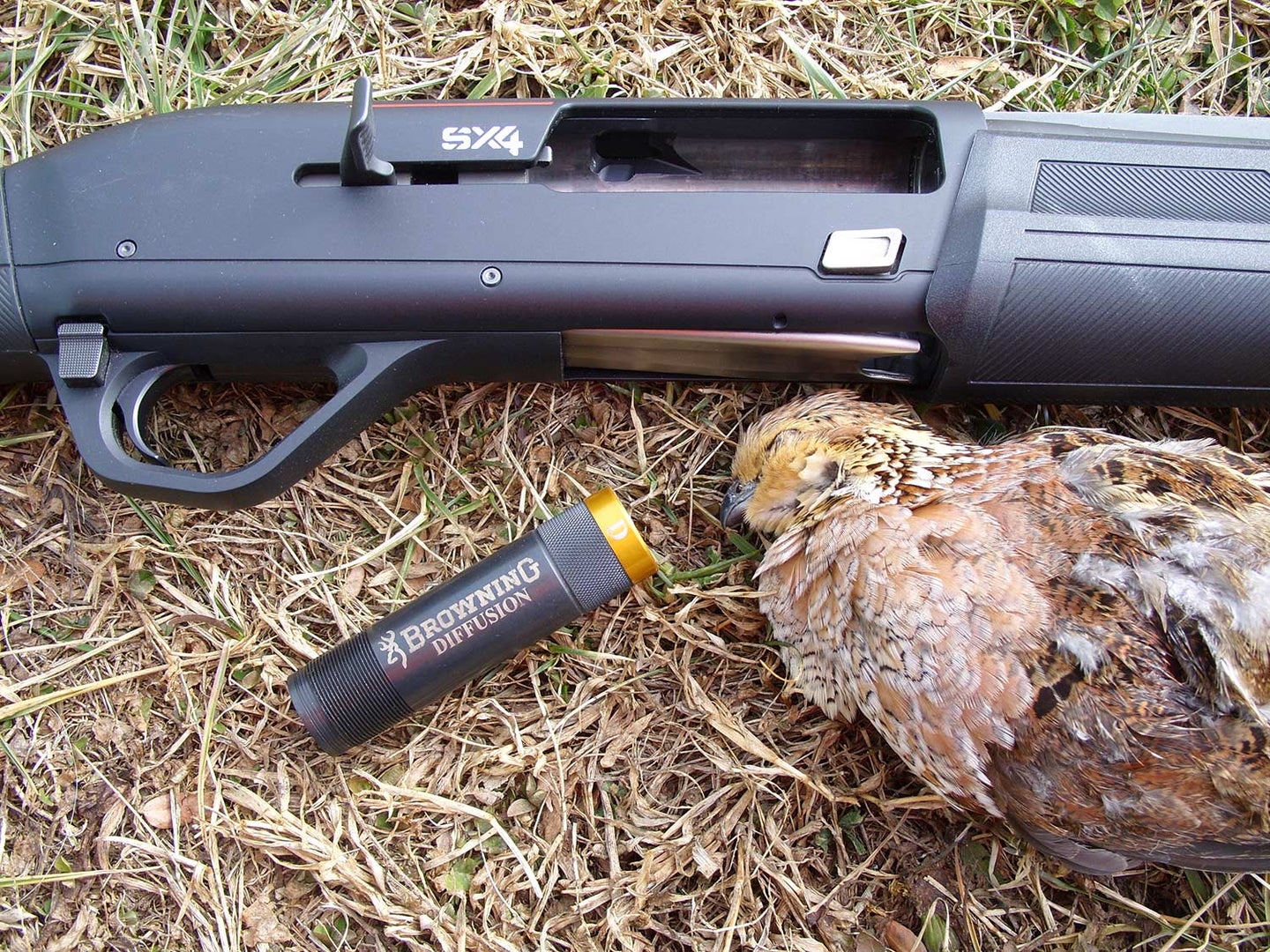 Though hard to come by, diffusion chokes like this one from Browning help open up a shotgun pattern. Jarrod Spilger
SHARE

For many years, I wasn’t a quail hunter. Quail were merely an afterthought, a chance encounter while pheasant hunting. Then I got Phantom, my small munsterlander pointer. For eight seasons, she led me on a crusade for quail that gave me a fresh perspective on the pursuit of bobwhites. I became a Quail Hunter.

As Phantom’s points got ever stauncher and my shots at quail got ever closer, I had to rethink how I hunted quail. Chokes had to be more open, patterns had to be wider, and my overall tactics now required finesse. After plodding along behind a flusher for over a decade—simply taking my shots however and whenever I got them—that madness of surprise quail hunting was replaced by the studious methodology of a focused pointing dog. Here’s how I dealt with this new era of close-range quail hunting.

Most modern shotguns come from the factory with three choke tubes—improved cylinder, modified, and full. Of those three, IC is probably the best suited for quail since it produces the most open patterns. Shots at quail are usually inside 25 yards, especially when hunting over a pointing dog, so a choke that throws wide, even patterns that open quickly is needed.

Here are three ways to open up the pattern on your shotgun:

Skeet: While IC is good, there are some even better choke choices for dealing with close-range quail. Skeet is one size more open than IC and a great all-around choice for quail. As its name implies, it’s the favored constriction of skeet shooters, where shots are up close and personal—especially at Stations 1, 2, 6, 7, and 8.

Cylinder: As Phantom got older and held her points ever longer, I opened things up even further to cylinder. A cylinder choke has no constriction since its internal diameter measures the same as the shotgun’s bore. For point-blank shots at quail (or any other bird for that matter), a cylinder choke throws an extremely forgiving pattern. If your shotgun comes with a skeet and/or cylinder tube, you’re set. Otherwise, look to the aftermarket companies for these constrictions.

Diffusion: Eventually, I decided to really open things up and started using a diffusion choke. My hit rates improved immediately. A diffusion choke creates an extremely wide pattern that opens up almost immediately upon exiting the choke tube. Also known as a spreader or negative choke, the internal diameter of a diffusion choke is actually greater than that of the bore. To accomplish this, a diffusion choke must be an extended tube since it has to extend beyond the muzzle in order to be more open than the bore.

Spreader-style chokes are rather rare. Browning offers diffusion tubes for its Invector-Plus choke system, as does Briley, but for a greater variety of choke thread patterns. Kick’s Smoke choke tube line includes a Negative constriction which creates spreader-like patterns.

For best results in open chokes, use smaller shot sizes, like 7.5s or 8s, to maintain sufficient pattern density. Larger payloads, like 1 1/8-oz. or, if you can find it in the smaller shot sizes, 1 ¼-oz. also help ensure there won’t be any quail-sized gaps in the pattern that a bobwhite can escape through.

But what if you have an older, fixed choke shotgun? Or maybe you don’t want to swap choke tubes out in the field mid-hunt. Fortunately, there’s another quick and easy way to open up patterns: spreader loads.

Spreader loads have a specialized wad insert that causes the shot to disperse immediately after exiting the muzzle. The result is a wide, even pattern that makes hitting close range birds much easier. I’ve been using spreader loads for years to help me hit quail.

Since quail are often encountered while pheasant hunting, I initially prepare for the larger, tougher birds and load up with high-brass number 5s or 6s. Light modified is a great compromise choke when both birds inhabit the same area. If quail flush instead of roosters, I simply shoot my pheasant load at the covey rise. Then, I load up with spreader rounds in smaller shot sizes to open up that LM choke and go after the singles.

One of my favorite spreader loads is Polywad’s Spred-R. “What makes our Spred-R loads work the way they do is our patented insert,” says Jamie McClanahan of Polywad. “The insert doesn’t look like much, sort of like a poorly made golf tee, but by inserting it into the top of the load as a kind of over-card, it forces some of the shot to roll around its edges which makes the shot spread out faster.” The whole process lasts only an instant, as the Spred-R insert quickly falls away, so there isn’t a large, pellet-less gap left in the center of the pattern.

Polywad also offers shorter DoubleWide shells for vintage 12, 16, and 20-gauge shotguns with 2.5-inch chambers. “DoubleWides are sort of the best of both worlds,” says McClanahan, “as they have the Spred-R insert that gives large, even patterns, plus they work in older guns with shorter chambers.”

If all this seems like cheating or a way to compensate for poor shooting, consider this: Spreader loads won’t shoot up the bird as badly or damage precious meat like a standard load might at close range. The last thing you want to do is obliterate a delicious quail.

Hunting close range quail behind a good pointing dog (or a disciplined flusher who works inside 30 yards) is an art form in and of itself. It can even be downright civilized at times.

A staunch dog that holds points tightly gives the hunter time to plot potential flight lines and determine the approach in order to get the best shots possible. Then the hunter simply walks up behind the dog at a slow but steady pace, and, if the dog’s still holding, beyond the dog to force the flush. Keep your shotgun ready at port arms, because the imminent covey rise is always unexpected, even when it’s expected.

This style of quail hunting is much more orderly than trying to rein in a running dog and taking hurried shots whenever and however they present themselves. Sometimes, after a particularly good hunt with Phantom, I’d come home feeling like I’d merely went on a leisurely stroll – and shot a few quail along the way.

The trade-off, though, is those ultra-close shots that can be difficult to make – unless you employ some of the tools mentioned above. But when all the stars align, and everything comes together like a perfectly timed symphony, close-range quail hunting is a thing of beauty.

This season, I’ll be attending the dance with Phantom’s young cousin, Komet. I’d encourage you to gather up your own dog, screw-in an open choke or chamber a spreader round, and experience the thrill that only in-your-face quail hunting can provide.