The Favorite Shotgun, Choke, and Ammo Combinations of 5 Diehard Duck Hunters (and One Outdoor Writer) 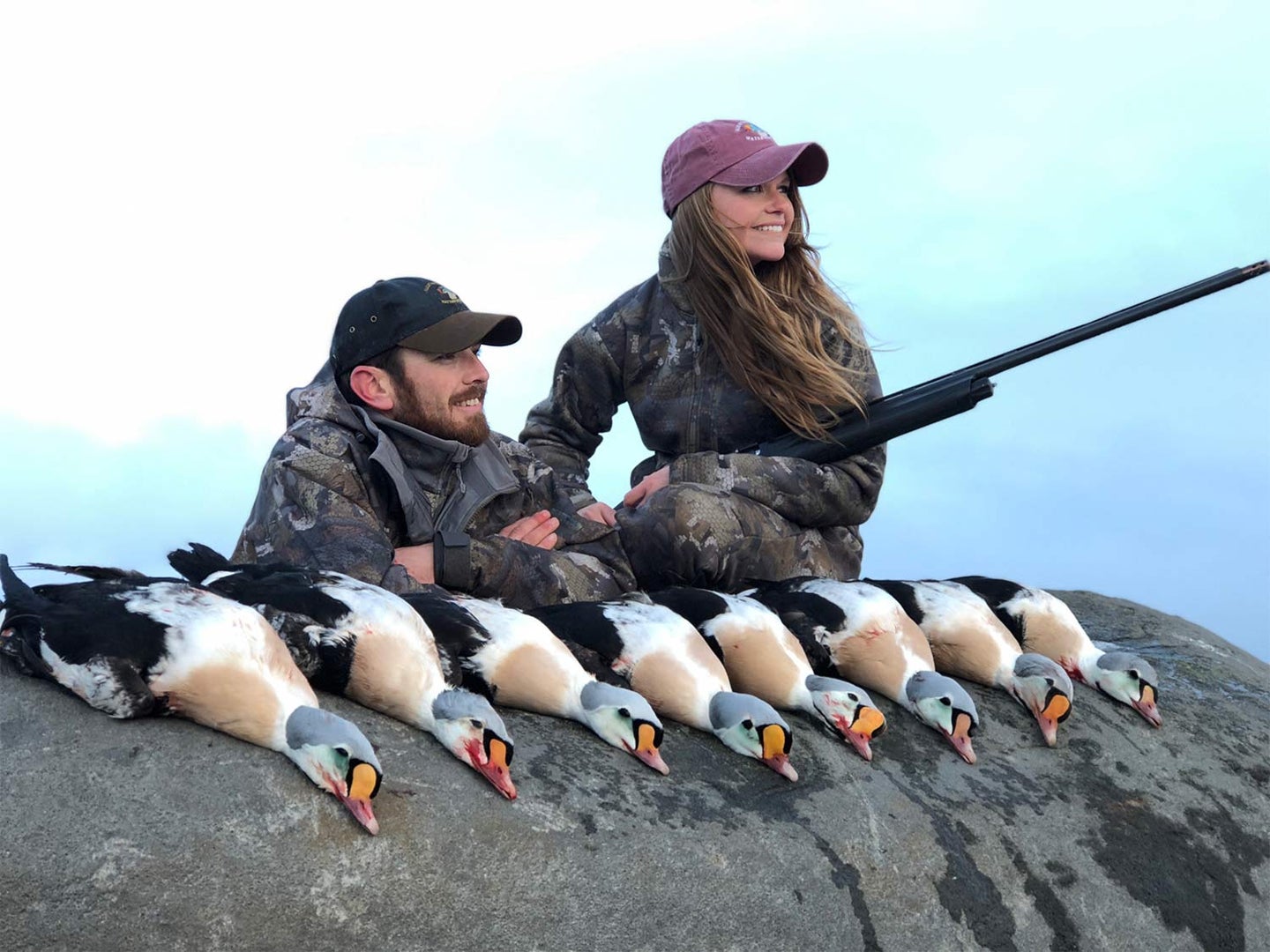 Most duck hunters head to the patterning board after buying a new shotgun to see how their gun shoots and identify where the shotshell pellets are striking paper. You might think the results are indicative of where that payload will hit greenheads and honkers come fall. But pattering your autoloader at the range is only the beginning. It tells you what a gun will do if you point it at a target and pull the trigger, sure. But that’s not how we shoot waterfowl. Unless turkey season is around the corner, I don’t actually pattern my guns on paper targets anymore. I head to the skeet range with an assortment of choke tubes and duck loads. Then I start shooting, and I don’t stop until I find the best combination of choke and ammo for that gun. That gives me a better sense of how the gun is going to perform on birds.

Since you might not have the money (or time) to get your hands on several choke tubes and types of ammo, I talked to some of the most hardcore waterfowlers I know—none of whom have sponsor or brand affiliations—to find out their go-to gun, choke, and load combo. You might be surprised to learn that those high-end bismuth and tungsten shotshells didn’t make everyone’s list. In my experience, you don’t need a custom shotshell if your gun is properly choked for the ammo you’re shooting. But as legendary king eider guide Russ Owen always says, what works for me may not work for you.

So here are some different options to consider before your next waterfowl hunt.

In the summer, Kirby and her husband Chris run a fishing charter, but once fall hits they are off to Canada (when there’s no pandemic, that is.) From there, they make their way south, following the migration through the Dakotas, Kansas, and Oklahoma. They’ll chase snow geese, too, once the conservation order hits in February.

Four years ago, Kirby switched to a Franchi Affinity Compact and hasn’t looked back. She screws in a Carlson’s Cremator full choke, and shoots the trusted blue box, better known as Federal Speed Shok, which you can often buy for less than $15 a box. Speed Shok, along with Kent’s Faststeel (both all steel loads that have been upgraded in the last few years) are some of the most widely trusted among hardcore duck hunters. I shoot both often and always see empty hulls from each brand in every duck blind I hunt.

Kirby shoots 3-inch BBs for honkers and sandhill cranes. Snows, specklebellies, and ducks all get a dose of 3-inch 2s. She has tried pricier loads, but hasn’t seen any marked difference in performance.

“To be honest I can’t understand the hype in buying bismuth or tungsten shells,” Kirby says. “If the birds are where they’re supposed to be when you call the shot, Federal does just fine.”

If there’s one guy I know who gets the most out of cheap hunting gear, it’s Joe Weimer. Weimer is so frugal that he carries his Winchester SX3 and SX4 in an old hard case one of his buddies was about to throw out. He hunts most every day of duck, goose, and snow goose season, typically until he shoots a limit or the sun sets.

For ducks and honkers, Weimer shoots his old SX3, which looks like it spends the offseason at the bottom of a lake. It still functions flawlessly, not counting one day in Saskatchewan when he forgot to screw the fore-end cap on tight. The gun’s guts spilled out onto the Canadian prairie when the first flock hit the decoys. He pairs it with Winchester Xpert 3-inch 3s for ducks and Browning’s BXD 3-inch 2s for honkers. The SX4 feeds a touch better than the SX3, so he shoots that on spring snows when the extended magazines come out and the gun is forced to cycle more than three shells in one volley. He uses Winchester Xpert Snow Goose shells for white geese—they are incredibly economical (and effective). A Rob Roberts T3 choke is always affixed to the end of both guns.

“I’ve never thought, Man I’d have killed my birds if I had some more effective shells. These just didn’t do the trick on that decoying mallard at 21 yards,” Weimer says. “I’m not saying other shotshell brands don’t work. But I’m at a threshold where I don’t feel like I’m missing out on anything, so I’m not going to spend more. I hunt every day and I need something that works but that is economical. I’m not a guide or market hunter so numbers aren’t what matter to me. I try to shoot everything in the decoys, and these loads do the trick.”

Most fall mornings I curse Jeremy Thornton for steering me through the gauntlet that is Illinois public-land walk-in duck hunting. It’s some of the toughest waterfowling you can do: lots of long walks for few birds. Plus, the shots you have to make on ducks are often downright difficult. Birds here get pressured badly, and like many states in the Mississippi Flyway, Illinois is seeing fewer migration days, which means more educated ducks and geese.

Read Next: 5 Tips for Shooting a Shotgun Better and Faster

Thornton learned long ago that you need to be able to shoot birds at distance here, and found that a factory modified choke in his Benelli Super Black Eagle 2 or M2 20 gauge works best. He shoots Hevi-Steel 3-inch 2s for ducks, and BBs for the big, greasy, local honkers. During snow goose season, Thornton just finds the cheapest 12-gauge steel load he can, because snows are notorious wimps who almost faint at the mere sight of a shotshell.

“I used to shoot Hevi-Metal [which is about $10 more a box], but Hevi-Steel performs just about the same…maybe we get a few more cripples,” Thornton says. “I never really got into the aftermarket chokes. I have a few Hevi-Shot chokes, but I like the pattern I get from the factory model. It covers up my bad swings.”

Palmer guides with some absolute killers in the Flint Hills of Kansas. They specialize in putting huge bunches of lesser Canada geese in your lap. The birds get so close that he sometimes pulls out an old Beretta with a mounted red-dot to snipe banded geese, hybrids, and Quill Lakes honkers (geese with white patches on their bodies) in tight. Most hardcore goose hunters will shoot a 12-gauge, but lessers are a smaller bird and a 20 is plenty for killing them inside the decoy spread.

His favorite setup at the moment is a Beretta A400 20 gauge, Apex Ammunition Steel/TSS blended 3-inch 4s, and an improved-modified Carlson’s choke. That rig will kill greenheads just the same, some of which are about the size of a lesser (and probably more hardy) in the late season.

“I swear by that load,” Palmer says. “It will kill anything I point my gun at. I shoot some other shells too, but Apex is hands down the best.”

For a long time Russ Owen guided for king eiders on the Bering Sea. It’s the toughest place on earth to kill a duck, and if your gun is going to fail ,it will most certainly happen here. For years, Owen relied on a Beretta Xtrema 2 and paired it with the first choke tube Patternmaster came to market. That tube, which only leaves the muzzle of his gun to be cleaned, debuted in 1993 and was revolutionary. It shortened shot strings to 2 to 3 feet so more payload connected at impact. He’s shot a variety of shells through the gun, including Speed Shok, Faststeel, and the little-known Wolf brand.

But now he predominantly is shooting the copper-plated bismuth 3-inch 5s from Boss. Shooting hardy kings at distance on the open sea takes serious knockdown power, and he needs a shell that can perform when there are so many different variables at play.

“Getting to the point where you are reliant on one gun, shell, and choke is really more about how well you know your gun,” Owen said. “I have an intimate knowledge of how my gun performs out to 60 yards, much in the way a bow or rifle hunter knows their weapon.”

As an outdoor writer, I’ve had the opportunity to shoot a wide variety of shotgun, choke, and shotshell combinations. But like many hunters, I’m a pretty average shot with flashes of good shooting sprinkled in there. I have the advantage of handling lots of shotguns, which gives me the unique opportunity to discover the best fit for me. And while I’ve shot different guns from time to time, I always go back to what I consider the best 3-inch autoloader ever built: Beretta’s A390 Silver Mallard. They stopped producing these guns in the late 1990s, which is unfortunate, because they’re truly workhorse autoloaders. If one breaks down, it’s only after tens of thousands of rounds have been put through it.

I shot a lefty Benelli Super Black Eagle 2 (I’m a natural righty but left-eye dominant) for a while because I was sick of reaching across the trigger guard to click off the safety on the A390. But once I had the Beretta converted to a left-hand safety, I shot it better on ducks than any other gun I’ve shouldered. Coupled with a Rob Roberts T2 (the gun doesn’t like the T1 or T3 for some reason), I’ve made some damn fine shots on ducks (and missed plenty, too). Hevi-Metal patterns best out of it. Any time I’ve made a long distance shot on a greenhead, it’s been with 3-inch 2s, 3s, or 4s. I know for a fact that choke, load, and gun combination makes me a much better shot that I really am, because all my best shooting days in the marsh unfolded with that setup in my hands.