The two unidentified hunters made it to shore and survived the ordeal. Officer Logan Carter went back with a magnet to fish out their guns 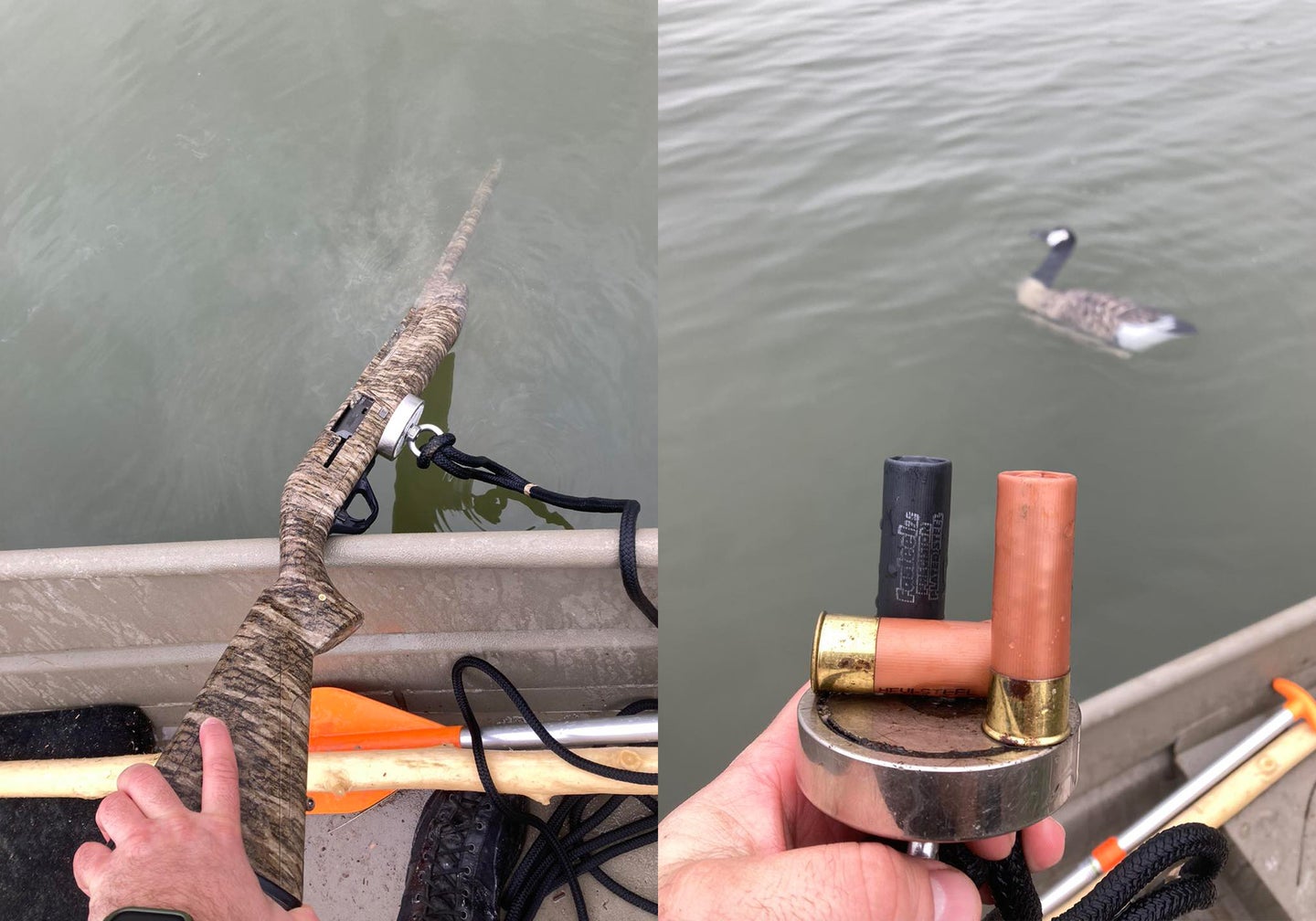 The two guns should be just fine after a short time underwater. Indiana Department of Natural Resources / Facebook
SHARE

Two unidentified waterfowl hunters were lucky to make it out alive after flipping their kayaks on Indiana’s Deam Lake in Clark County, Indiana, on Wednesday morning, Jan. 18. They temporarily lost their shotguns to the drink before Indiana Conservation Officer Logan Carter fished them out of the water with a magnet later that day.

Until now, we’ve looked at magnet fishing as a hobby for folks who like finding old, abandoned stuff, especially guns, underwater. This is the first time we’ve heard of the practice being used by authorities as a public service. IDNR Law Enforcement public information officer Jim Schreck confirmed that Carter had recently acquired the magnet to assist in underwater evidence searches, although their dive teams and underwater remote operating vehicles (ROVs) with attached cameras are still the tools of choice. Carter thought this would be a good opportunity to try the magnet out, Schreck tells Outdoor Life.

Read Next: As Magnet Fishing Booms, More Guns Are Being Pulled from America’s Waters. Can Magnet Fishers Legally Keep Them?

Gear rescue aside, the hunters’ self-rescue was a bit of a miracle. In the Facebook post, IDNR says the water was a teeth-chattering 41 degrees. Both hunters had life jackets in their possession, although only one was wearing it. Indiana law requires that all boaters have their own personal flotation devices in the vessel, but wearing them is not mandatory.

“They’re definitely pretty lucky,” Schreck says. “We could have been doing a body recovery instead of a firearms recovery.”

Waterfowl hunting in kayaks has its pros and cons, which we’ve explored in the past. While we don’t know for sure what happened to these two hunters, there are plenty of things that can go wrong when hunting from a kayak. One of the downsides to the practice is the limited mobility kayaks offer. It’s not recommended to shoot from the boat, which can result in hunters turning their bodies at awkward angles and putting themselves at risk of tipping over.

If the hunters were just paddling in deeper water rather than actively hunting, there’s a chance a larger boat kicked up a big enough wake to tip them over. That’s one of the reasons why kayak hunting is best done in ultra-shallow waters that are unreachable even for mud motors and might require a drag or two. Sometimes deepwater crossings are inevitable, though, and there’s always a risk of a shotgun (or other gear) going overboard. This is where floating gun cases come in handy.