Greenheads get spooky in January. To kill them you must change up your tactics 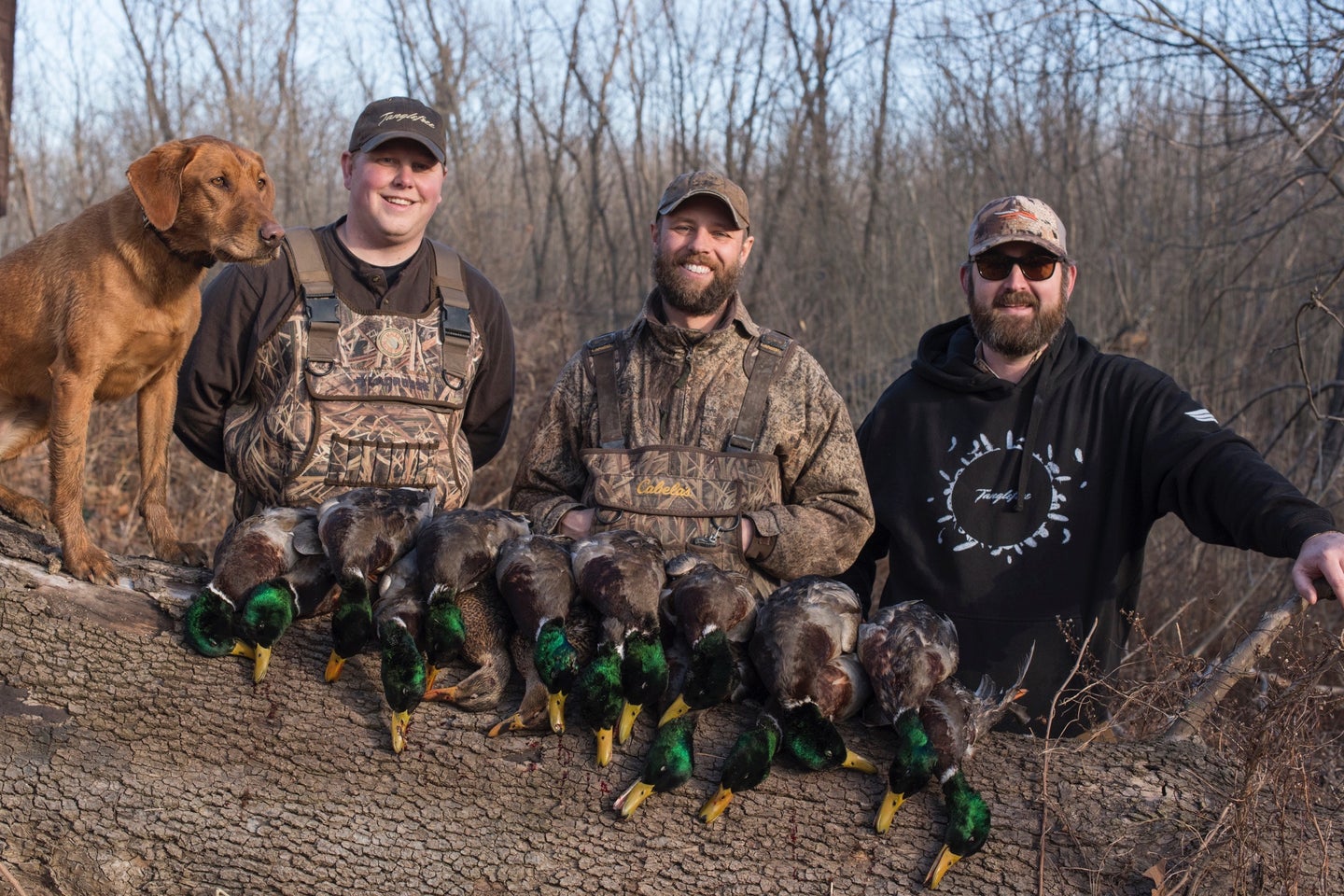 Get on the X, or as close to it as you can, to kill late-season greenheads. Joe Genzel
SHARE

Now is the time that mallards become damn tough to kill. Hens and drakes are pairing up. They are more solemn, and want to be around other ducks less, though mallards will congregate in large groups on hidden waters to avoid hunting pressure. To kill late-season greenheads, you need to think differently. These aren’t opening-day ducks. They’ve seen all the decoys, heard all the calls, and been shot at by every duck hunter in the county. The birds know the game, and you have to change tactics to trick them into shotgun range. Here’s how to fool more wary January greenheads.

1. Get as Close to the Ducks as Possible

In January, my strategy is to be where the ducks want to be and set up on them there. Forget trafficking birds. Get on the X. If you can’t, get as close to the X as possible, so that ducks coming off the roost in the morning get confused in the darkness of early shooting light and pitch into your spread by mistake. The difficulty in getting close to the birds this time of year is finding cover. By now they’re flaring off wooden box blinds and roll-top pits sunken in the levee. You have to get out in the water with them. The best production blinds to use are the Invisiman and Fatboy DP designed by Ira McCauley, founder of MoMarsh.

The Invisman is essentially a layout blind without the foot bag. It’s built on a frame that can hold a 300-pound hunter, but its real advantage is the four telescoping legs that allow you to hunt in up to 30 inches of water. You can brush this blind in and set it up in any kind of shallow-water wetland. I’ve used one in moist-soil impoundments and flooded corn. Late in the year, the smart ducks land near cover, so they can hide quickly. If your blind looks like a muskrat hut or bushel of buck brush, mallards are more relaxed and willing to land close. If you have to navigate bigger water to get to the birds, the Fatboy DP is ideal. It’s a layout boat you can brush in after buying the deck cover and door system MoMarsh makes . You can also put a motor on the detachable transom. Fair warning, Fatboys are a coveted item; they sell out quickly each year.

If you can’t find the ducks it’s because they have found the most secluded open water they can pitch down into, typically a tree-lined creek bottom with high sides. I have seen thousands of ducks pour into creeks that are no more than 10 feet wide and sit there all day until after shooting hours, then go out and feed. Finding these ducks takes a decent amount of work, but if you can find creeks in January, scout them hard. It’s best to find a good vantage point where you can see the creek from a distance and watch the birds go down through binoculars. Trying to walk up on birds sitting on such small water will only spook them (and they may never come back). You can use decoys if you want to, but I have found that if you let the first group or two light, and then make a move if you’re not on the X, it works out just fine. Once those mallards commit and get under the canopy, they’re dead to rights.

A lot of hunters don’t believe in spinning-wing decoys later in the season, but they’re still advantageous. You need a spinner that operates on a remote so you can turn it on and off with the press of a button. I leave the spinner off most of the time, but if the ducks are on the corners, I rapidly turn it on and off, trying to catch their attention. Don’t put the spinner in the middle of your decoy spread, and never use it on cloudy days, just in the sunshine. If you’re in flooded corn or buck brush, stake it out under the cover of the stalks and branches. This will breakup the outline of the decoy, and also mimic the way ducks like to land in secure areas late in the season.

4. You Need a Decoy Spread That Sparks Duck Curiosity

Some innovative hunters in Missouri have recently been using a unique spread that’s deadly on stale birds. Stuffer goose decoys, which use the skin of a bird adhered to a plastic body mold, were popularized by Pacific Northwest hunters. A floating duck version has made its way to the Midwest, designed by Boland Decoys. Boland provides you with the mold, painted base, and keel. Then you skin your own hens and drakes and apply it over the mold, making for an ultra-realistic decoy. If you set one next to a production decoy, there is no comparison—the Boland decoys look like real ducks. My buddy Joe Weimer has been using them for a few years to kill pressured greenheads and swears by them. That’s high praise from a guy who is so frugal, he’s still tooling around in a 1980s Ford Ranger and keeps his Winchesters in a guitar case someone threw in the trash.

There are two decoy spreads I rely on in January. My favorite late-season water spread is all Canada goose floaters. Most hunters around me have honker decoys out, but I like to use strictly Canadas. I don’t throw one standard size floater. I use multiples from different manufacturers, so they don’t all look the same. That probably doesn’t make a huge difference, but in January there’s a mix of giant resident honkers (12 to 14 pounds) and migratory interior Canada geese (nine or 10 pounds), so I make it as realistic as I can. The visibility of the decoys triggers mallards to come take a look. Plus, it’s different from all the other rigs nearby. Three- or four-dozen honkers in the flooded corn makes greenheads curios. If I go with a mallard-only spread, there’s a few bags of fully-flocked and flocked-head decoys I keep in slotted bags strictly for late season. They look as close to the real thing as possible. The key is to buy decoys with different postures. Don’t use strictly head-up decoys. The ducks have seen too many blobs of those during the season. Also, I don’t worry about pairing drakes and hens together late-season if I am hunting a food source. Ducks don’t care if their mate is right beside them when they put the feed bag on.

Read Next: 5 Keys to Killing Reverse Migration Mallards and Geese

Most hunters who say they don’t call too much at ducks turn out to be liars once you share a blind with them. If you’re hunting a food source or loaf pond where you know ducks are coming to, why call at them? I hunt in an extremely pressured area with few ducks. On average, there are around 3,000 to 6,000 ducks on a given day during the season. I am hunting either flooded millet or corn, which the ducks will come to feed in. I let them. There’s no need to call. Occasionally, I’ll hit a light three- or four-note comeback call if I think the ducks will respond. Otherwise, I let the neighbors wail away on their calls. By now the birds know where they are safe, and where they are not. Aggressive calling is only a signal to the ducks that danger lurks below and it’s time to get the hell back to the refuge. Unless you are an extremely competent caller, and know exactly when to call— and when not to—you’re going to spook wary ducks. So many duck hunters think they know how to call ducks properly, but I’ve only occasionally been in a blind with folks who really know how to do it. Most times it’s been with tandem callers that have hunted with each other for years, know how to play off their buddy, and sound like real ducks. Four guys doing their own thing on a Primos Wench won’t get the job done. Stay silent, be patient, and let the birds work.