The Browning Citori That Killed 100 Gobblers

It took more than 30 years, but Ira McCauley finally shot his 100th spring tom with an old double-barrel shotgun he once lost in the Missouri turkey woods 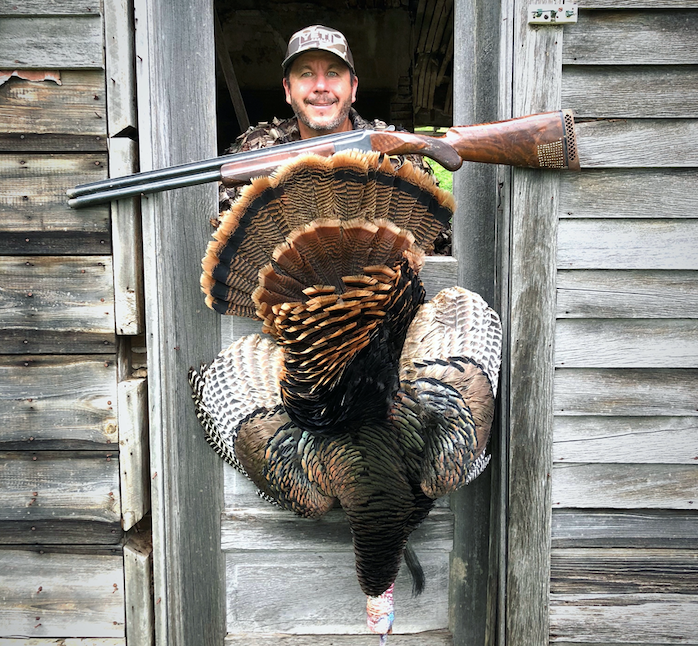 For the better part of three decades, Ira McCauley was on a different kind of turkey quest. Most U.S. hunters are after a Grand Slam, which requires tagging one each of the Merriam’s, Rio, Eastern, and Osceola subspecies. But McCauley, co-owner of Habitat Flats, wanted to kill 100 turkeys with one gun: an old Browning Citori he bought in college while working at a Bass Pro. Most seasons, he shot two Missouri toms, but as he closed in on No. 100, the longbeards became elusive. From 2017 until May 2019, he remained stuck on 98.

“Every spring I would get my turkeys, but then all the sudden there were a few seasons where I didn’t get one,” says McCauley, who did shoot a mouthy jake he thought was a tom during that stretch. “I wanted to get to 100 with this gun. It had a unique story behind it, and I had gone through so much with that old double. I just had to make it happen.”

He bought the over/under, one of the first Citori lines Browning ever camo-dipped (which they have since stopped, thank God), with his employee discount in the late 1980s or early 1990s while attending the University of Missouri. For a long time, it was the only shotgun he owned, and though it was primarily his turkey gun, McCauley used it for hunting all manner of wild game. McCauley is a former duck and snow goose guide, and the double gun traveled with him from Alaska to the Canadian prairie, and across the continental United States.

Each time he shot a tom, McCauley would drive a brass nail into the stock of the Citori. In total there are 111 nails—now 108 on one side for McCauley, and three on the other for the birds his oldest son Kory, who he hopes will take up the gun one day and keep its legacy alive, has killed.

But there was a time when McCauley thought he would never see the Citori again.

A Lost (and Found) Gun

In 2002 or 2003, McCauley was turkey hunting near his home in Defiance, Missouri. He had hiked in about a mile to get to a spot he knew there were gobblers. He called in a tom, shot it, walked back to the truck, and headed off to work. The next morning McCauley hunted again, but as he went to pull the o/u out of the back of his truck, it wasn’t there.

He drove to the veterinary clinic where he worked and frantically searched for it there. Then he headed to the spot where he had killed a turkey the previous day. McCauley found the pile of feathers where he shot the tom, and retraced his steps to the tree he thought he had sat against during the hunt, but never found the gun.

“I called the police and reported it stolen,” he says. “I figured someone had taken it out of my truck while I was a work.”

Three years went by. Then McCauley got a call from the landowner where he had shot his last turkey with the Citori.

“Some guy had found my shotgun while he was out there shed hunting,” McCauley says. “It was leaning up against a tree and the barrels were full of water. It was rusted shut and all the wood on the stock and fore-end had gone to hell.”

The gun was in bad shape, but McCauley wanted to salvage it and continue his pursuit of 100 gobblers. So, he sent the double gun off to Browning to be restored. It took three years. When he got the Citori back it had been stripped of its camo-dip in favor of blued steel, with a new stock and fore-end. It looked like a brand new gun, but there was one serious problem.

“More Misses Than I Can Count”

Determined to get to 100 with the Citori, McCauley worked on the stock, filing it down to try to get a better sight picture in hopes the gun would shoot straight. But that didn’t work. So he sent it off to Rob Roberts Gunworks for a diagnosis. Roberts was able to drop the shot pattern a few inches, but it was still shooting high.

“I think I probably missed at least 20 birds once I got the gun back from Browning,” McCauley says. “It’s hard to remember to aim at the dirt in front of a tom in the moment. It was excruciating every time I missed. God, they were painful. I couldn’t get to 100 fast enough. I wanted it to be over so I could shelve the gun and never hunt with it again.”

McCauley recounted several stories about whiffing on turkeys. Like the time he missed one on Kansas public ground, but decided to stick it out, and ended up making the most miraculous double of his life.

He was hunting with a couple of buddies late-season, and the birds were extremely wary of decoys and yelps from hunters by then. It was so tough, the other guys in his group said the hell with it and started hunting less-pressured private ground, leaving McCauley on his own at the public tract. After days of sitting in silence, he finally heard a gobble. Two hens popped out with a tom in tow…and he missed.

“I texted my buddies, and they told me ‘You suck,’” McCauley says. “But I was still determined to kill a bird.”

That night, he roosted a couple gobblers and woke up extra early to set up on them in a low spot, just hoping the birds would walk by close enough to get a shot. The toms were gobbling from the roost at first light, and pitched down into the field. McCauley let out a soft yelp, the birds came in, and he killed one. While this scenario played out, he had heard another tom gobbling in the river bottom close by. So once he shot the first bird, McCauley pressed his luck and set up on a second gobbler.

Soon, a bunch of hens appeared, and came in close, but they busted McCauley and started easing away. The tom held up at 50 or 60 yards. It wouldn’t be long until the shot opportunity passed, so McCauley fired.

“When I shot, that bird flew straight up in the air and then right back down,” McCauley says. “I had put one single pellet through his eye, and ran up there as fast as I could to finish him off.”

Just about every spring, McCauley camps out in eastern Kansas and turkey hunts. He was sitting on 99 toms, needing just one more to notch No. 100 and retire the Citori. He and long-time friend, Bob Schultz, were sleeping under the stars when a rumble of thunder awoke McCauley around 2:30 a.m.

“I looked at my phone and it was fixing to absolutely downpour on us,” he says. “I yelled over to Bob to wake up and we threw all of our stuff in the back of the truck, and just barely made it out of there, sliding and fish-tailing down an old two-track.”

They headed west about 3 and a half hours to get out of the storm, but it was cold and windy—not great conditions for turkey hunting. They managed to locate a tom, but he was gobbling in the distance at least 500 yards away. And another rainstorm was headed in their direction—thunder was already clapping. Then the bird went silent.

“I couldn’t believe it,” McCauley says. “I thought all that thunder would surely have him fired up.”

The two men decided the tom was staying put and the storm was brewing, so they made a move to get closer. The rain slid south, missing them, and as they made the stalk, the tom gobbled—he was now behind them. Somehow, he had walked passed them during the stalk without spooking and was closing in on their original position. McCauley sprinted down a creek path, back to where they had just come from, found a tree, and sat down. As soon as his butt touched the Kansas dirt, the turkey gobbled again. He was only 100 yards away.

“I gave him a little yelp, and he walked in” McCauley says. “You couldn’t have drawn a straighter line from where he came from to the end of my gun barrel.”

McCauley didn’t miss this time and was able to drive a final brass spike into the stock of the Citori, (though he has hunted with the gun a few more times since, killing a total of 108 toms with it). He had the 100th turkey mounted, and next to the bird hangs many of the beards from the other turkeys he has killed with the gun. Soon, he will mount the Citori as well.

“It’s been quite a journey with that old gun,” McCauley says. “It’s more of a relic, a timepiece now, and I don’t plan on shooting any more turkeys with it…unless I change my mind.”