The Evolution of Shotgun Coatings: From Blued Barrels to (Mostly) Impervious Firearm Finishes

Blued steel is a classic that will never die, but there are a host of other finishes to protect your shotgun from use and abuse in the field 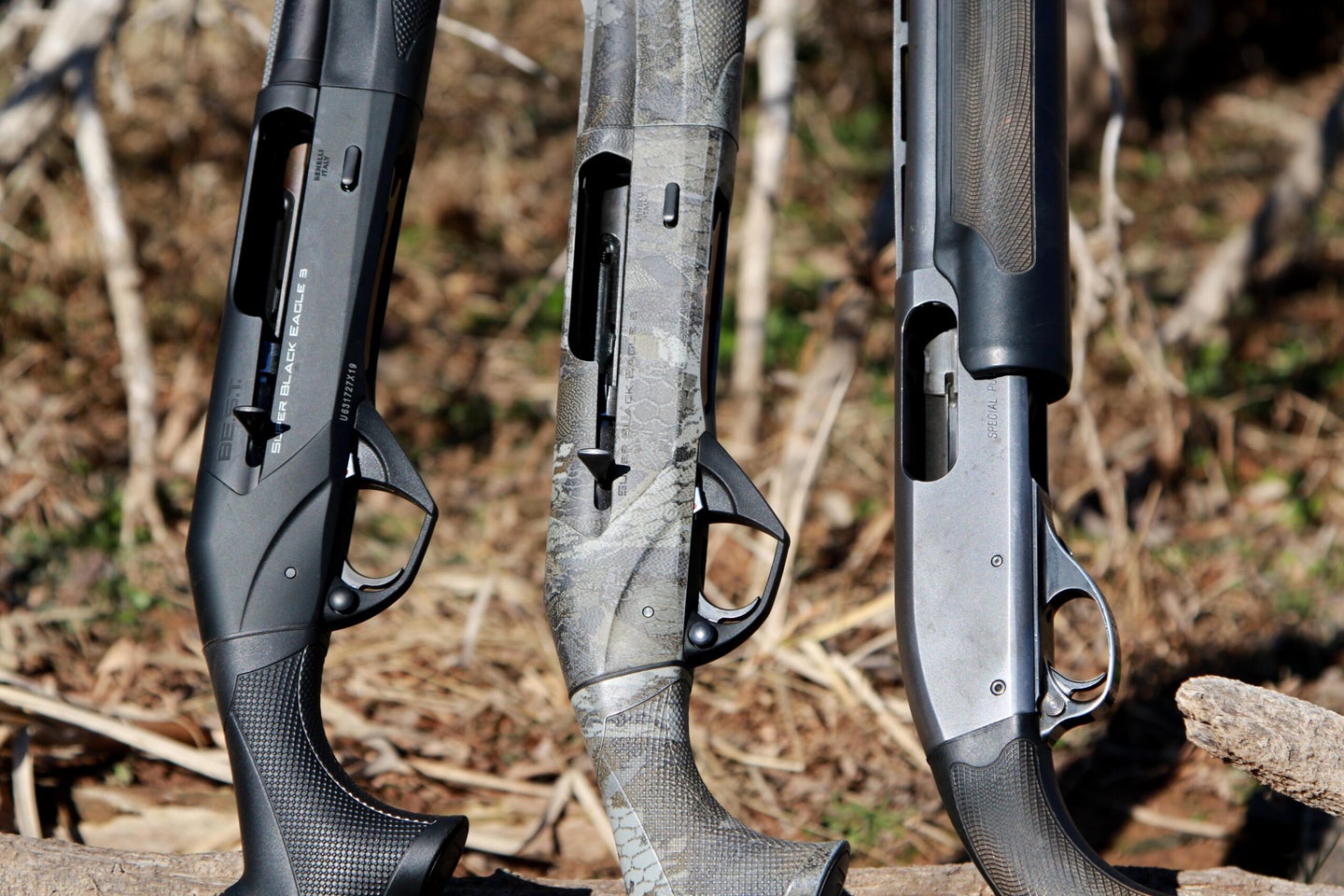 From left: The Benelli Superblack Eagle 3 with the matte blue BE.S.T. finish; an SBE3 with a camo finish, and a Remington 870 Special Purpose Marine Magnum pump with a nickel-plated finish on the barrel and receiver. Natalie Krebs
SHARE

My shotgun slid sideways along the mesh wire fence that held the blind together. It was a slow morning, and the Benelli was propped against our makeshift hide of cedar boughs. I reached out to readjust the gun and, instead of setting it upright, clumsily scraped the barrel across six inches of the rusted wire. But when I rubbed my thumb over the scratch, I discovered it wasn’t a scratch at all—just a powdery residue from the fence that disappeared when I touched it.

This was lucky, because it wasn’t my gun. It was a test model—the Super Black Eagle 3, in Benelli’s new BE.S.T. finish—and if I couldn’t test it on birds at the moment, this accident seemed to count. Like some hunters, I’m hard on my gear and I don’t always take care of it the way I should. Like most waterfowlers, I want a low-maintenance shotgun I can shoot in any weather without worrying about rust.

As we waited for late-morning flights, I got to thinking about all the guns I’ve succeeded in scratching (with less effort), dinging, and soaking in the rain. I’m not sure if any coating could stand up to the hot mess that is my hunting season, year after year. So I did a little research and, as expected, it turns out not all shotgun coatings were created equal. But some are much better at withstanding the elements—and hunters—than others.

Diving into every iteration of every type of coating would be as painful as sitting through a chemistry lecture with a hangover. Instead, let’s run through the CliffsNotes.

The classic, and arguably least effective, way to coat steel shotgun components is with a black oxide finish, better known as bluing. There are multiple methods for achieving bluing—hot bluing, cold bluing, niter bluing, and so on—and different advantages to each, but the principle is the same: Bluing is a type of controlled oxidation that inhibits unwanted oxidation (a.k.a. rust).

The technique has been around a long time, and it’s certainly better suited for the field than untreated steel. But the protection bluing affords is minimal, and your shotgun is still susceptible to moisture and wear. Even so, many hunters are willing to put up with the maintenance in exchange for the aesthetics.

Parkerizing also aims to rust-proof iron or steel by dunking parts in a hot acidic solution. The process (known as manganese phosphating) was refined and rolled out by the Parker Rust-Proof Company in the early 1900s. It’s still not the best choice for preventing corrosion and abrasion, but it’s a big step up from bluing. Parkerizing has been used by the military (think WW2 service pistols), and it’s well-suited for tactical shotguns, thanks to its inherent anti-reflective properties.

Shotgun components can also be anodized, which is another deliberate oxidizing process, although it’s applied to aluminum and other non-ferrous materials rather than steel. With its anodized aluminum receiver, the Benelli 828U is a good example of this treatment. Anodizing is relatively cheap and durable, although aluminum can still pit and corrode, even if it won’t rust as steel does.

There are also options like nitride finishing, and brand-name processes like DuraCoat, and Perma-Cote. Maybe you’ve heard of a whole host of other finishes, all with acronyms that make your head spin: Physical Vapor Deposition (PVD), Plasma Enhanced Chemical Vapor Deposition (PECVD), and diamond-like carbon (DLC) coating, a slick, hard finish typically found in handguns, not shotguns. It’s also worth noting that all these types of finishes can be categorized as coatings or treatments. Coatings, like DuraCoat and Perma-Coate, are materials applied on top of the components, while vapor deposition processes typically bond treatment to the metal.

Like all things gun-related, you could really get into the weeds on the coating characteristics manufacturers have to consider. How soft or thick is the finish? Will it affect fit when assembling parts? Is the coating slick or rough, and will that impact the gun’s operation? Happily, these questions are an engineer’s problem, not a hunter’s.

Hunters have gotten resourceful for decades though, creating their own paint finishes with rattle-can camo patterns, which also adds a modest level of protection. Some manufacturers use paint too, though camo-dipped models are more common. Field & Stream shotguns editor Phil Bourjaily remembers seeing his first camo-dipped model in the mid-1990s, although he does his best to avoid owning one.

“There is no question that all these new coatings are way more practical than a blued-steel shotgun,” says Bourjaily, who continues to hunt waterfowl with one anyway. “You don’t even have to abuse a blued gun to rust it. Leave it zipped up in a case all summer, and it might be orange when you take it out in the fall.”

While many hunters do still appreciate classic blued-steel and a walnut stock, they’re also buying guns—lots of them—with these new finishes. And by most accounts, the demand is for one spray-on finish in particular that’s become a hunting-household name.

If you’re not familiar with it, we can assure you that Cerakote—a thin, spray-on ceramic coating—is all the rage these days. Although the Oregon-based company was actually founded in 1984, it’s only grown in recognition in recent years. According to its website, the company has developed more than 90 ceramic colors and finishes, and is used by more firearm manufacturers than any other coating.

“We have our own coating, Marincote, which we still use, but we’ve converted a lot of our finishes to Cerakote,” says Linda Powell, director of media relations for Mossberg. Cerakote isn’t necessarily more effective than Marinecote, but “Cerakote has a name for itself, and that’s what the consumer knows they want.”

It’s also, somewhat surprisingly, cheaper for the company to use Cerakote rather than its own finish. Meanwhile, Browning has also seen high consumer demand for the durable ceramic finishes.

“The Cerakote process is a huge part of our business,” says Rafe Nielsen, director of marketing and communications for Browning. He estimates Cerakoted models are equal in sales, or outsell, camo-finished guns. “It’s a great finish, but the aesthetics also help sell it.”

The company first experimented with Cerakoting in their rifle lines, and have rolled it out on the shotgun side (like on their Maxus Wicked Wing) in response to customer demand.

“[Demand] is huge. The more we do to an X-Bolt [rifle], the more we sell,” says Nielsen. “It seems to be the same on the shotgun side. Everybody’s got a duck gun, and you have to give them a reason to buy a different one, because they’re hard to wear out. And interesting finishes have proven to be another reason to get another duck gun.”

Given the momentum behind Cerakote, and the relative anonymity that many firearm companies’ own finishes have endured (ever heard of Beretta’s Aqua-Tech finish?), it’ll be interesting to see how hunters respond to Benelli’s proprietary BE.S.T., or Benelli Surface Treatment.

After that first accidental scratch test, I tried to deliberately damage the coating on the Benelli’s barrel. I left it uncased all week, dragged it over another bundle of rusted wire, pulled my truck keys across it, and even tried slicing it with my pocket knife, all without effect.

Of course, these tests were cute science projects compared to the decade, and millions of dollars, that Benelli invested in R&D to create the finish I was trying to destroy. It took so long, says director of product management George Thompson, because Benelli had to develop a new process.

In short, Benelli figured out how to combine a few existing vapor technologies and apply them to shotgun components at room temperature, instead of the barrel-accuracy-destroying high temperatures normally needed for application. So far, industry-standard tests show BE.S.T. resists corrosion and abrasion like a champ.

In contrast, BE.S.T. registers at 2,000HD, and is more than 20 times harder than any painted finish out there, including camo. Interestingly, companies outside of the firearms industry have started using Benelli’s treatment on certain product components, including Rolex, Ducati, and Lamborghini.

And speaking of luxury goods, you’ll notice that BE.S.T. does cost more. This is because all the company’s investment in R&D is built into the cost of the guns. A treated SBE3 has a price tag of $2,199; the standard synthetic black model is $1,899. There’s also an ETHOS model available in BE.S.T., and Thompson says Benelli has plans to expand the line.

Benelli actually considered a lifetime warranty for the coating, but abandoned that idea, Thompson says, because the phrase has been slapped on all kinds of products, diluting its value to such a degree that customers don’t even register it anymore. Instead, Benelli opted for a long warranty, which seems to be more effective at grabbing consumer attention: a 25-year guarantee sounds like a long time (the warranty applies to parts treated with BE.S.T.., not the whole gun.)

Despite all this low-maintenance shotgun tech, there’s still no such thing as a zero-maintenance shotgun. For starters, not all parts can be, or are, treated with certain finishes. The receiver, for instance, on the SBE3 is not coated with BE.S.T., and neither is the carbon-fiber rib, which will also show signs of wear.

A regular season is still hard on your shotgun, and the harshest environments still wreak havoc. Lee and Luke Kjos of Kjos Outdoors strip their guns every day when hunting sea ducks, and perform extra maintenance when hunting in damp or gritty environments, like the open farmlands of Saskatchewan where a fine dust from fertile soil blows across the open ground and into the actions. Coatings certainly help protect against damage, but they’re not a cure-all.

“Occasionally customers call us at BOSS, and say a shell is getting hung up in their guns,” says Luke Kjos, “And I’ll ask them if they ever clean their gun. And they say, ‘Oh no that’s not it.’ And I have to say, “Well yeah dude, I think that might be it.’”