What to Do When a Predator Attacks

Predatory animals can attack in an instant, but there are a few things you can do to prepare yourself—and survive 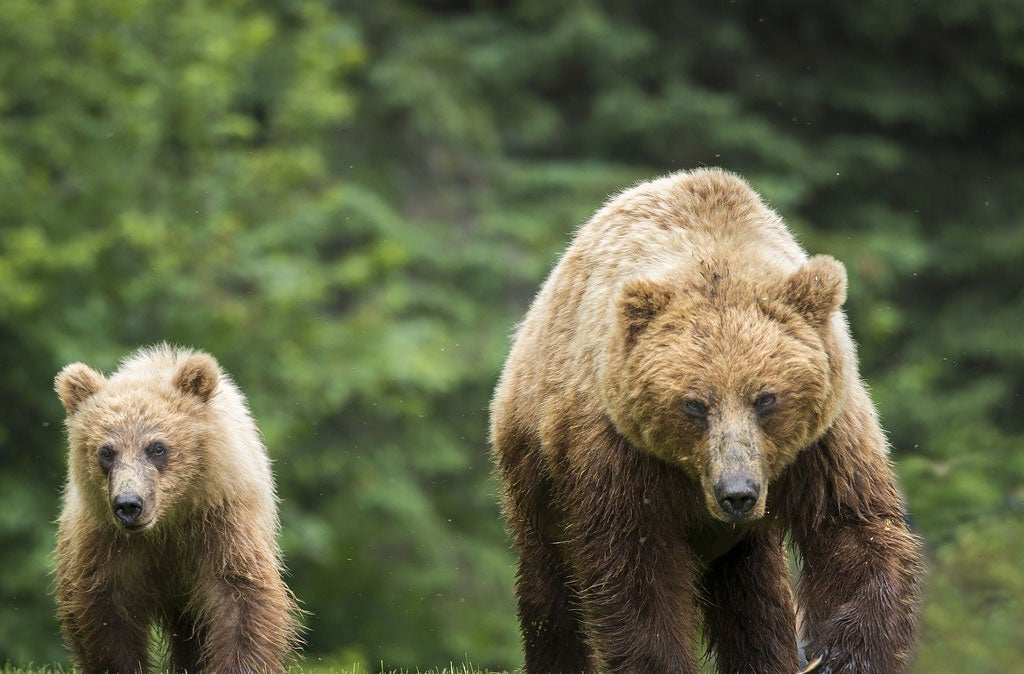 A mother grizzly with her cub could mean trouble if you don't respond properly. Pixabay
SHARE

In early July, the quiet agricultural town of Ovando, Montana, was the scene of a fatal grizzly attack. The victim was identified as 65-year-old Leah Davis Lokan, who was on a long-distance cycling trip. When Montana Fish, Wildlife and Parks released more of the details to the public a few days after the attack, the story turned even more horrifying. Ms. Lokan had been pulled from her tent and was killed by the bear at 3:30 a.m., in a campground with other campers present. While authorities are confident that they killed that specific bear a few days after the attack, the news got outdoorsmen and women talking.

Even though fatal animal attacks like this are rare, they awaken some of our deepest and most primordial fears. So, what exactly should you do when a predatory animal attacks?

Know That There Is Always a Risk

Animal attacks can occur anytime and in many different places, not just the wilderness. It’s natural for us to be more wary when hiking in remote areas, especially where predators are present. It’s also common for us to let our guard down in areas we perceive to be safe, like campgrounds and the suburbs. The tragic bear attack that took Ms. Lokan’s life occurred in a campground with other campers close enough to hear the commotion. The risk of being involved in an animal attack is always low, but it will never be zero. It’s up to us, as outdoorsmen and women, to manage our risks. For example, you should never keep food in your tent, whether you’re in bear country or not. This may have been a factor that lured the bear into the Montana campground where Ms. Lokan was attacked.

Learn which predators are present in your area or in any area you’re traveling. Learn their behaviors and how to avoid trouble. This is the correct mindset for survival. To study the threats you face, limit your risks, and know how to respond in the most effective way.

Choose Between Instinct and Insight

With dangerous animals running away can activate more a predatory response and trigger an attack. It’s like the age-old game of cat and mouse. When the mouse freezes, the cat may not even notice it. When the mouse makes a dash for safety, the cat is instinctively driven to give chase. Since most large predators have a top speed that is faster than the fastest human sprinter, outrunning an animal isn’t even possible and it’s likely to trigger that “cat and mouse” reaction.

So instead of giving in to basic instincts (running like hell) you’ll want to respond in a way that’s more effective. That means thinking through different scenarios ahead of time and deciding how to respond in each.

Decide to Fight or Freeze

For actual big cat attacks, like mountain lions, you’ll really want to fight the urge to turn tail and run. Instead, use your understanding of the animal’s behavior. A large male mountain lion could weigh more than 200 pounds and like other felines, they are ambush predators. They like to wait for prey to pass by and fast-moving targets are particularly stimulating (this is why trail runners and mountain bike riders are often attacked by lions). The cat is looking for a meal, not a fight.

If you don’t have a firearm for self-defense, then yell at the animal, throw rocks, make noise, and try to make yourself look bigger (for example, try opening your jacket or shirt to change your profile). While preforming these aggressive displays and acts of blustering, back away slowly to a safer location. Even though the instinct to run away from a mountain lion may be overwhelming, use your insight to make a safer retreat. Get to a vehicle, a structure, or into a group of people.

Bear encounters can be a different story. Say you’re hiking down a familiar mountain trail and enjoying your day. Everything seems postcard perfect, until you hear a deep guttural growl. You realize that a momma bear was standing in the bushes on your left and her two cubs were playing on your right—and now you’re standing between a mother bear and her cubs. Making yourself look bigger and getting aggressive won’t work in this scenario. You’ll only look like a bigger threat and inspire more maternal aggression.

For years, it’s been said that you “fight a black bear and play dead with a grizzly.” There’s still some logic to follow there, but a better way to categorize bears would be “defensive” bears and “predatory” ones. A bear that you surprise, for example, may charge at you. This animal believes you are a threat and it is defending its territory. The kind of bear that would be classified as predatory circles you, or tries to enter your tent.

You can use bear spray on both animals. Without it, you can play dead with the defensive bear. Lie face down, leaving your backpack in place to protect your back. Don’t let the animal roll you over. Stay on your stomach, even if bitten and scratched. Defensive bears will leave when they perceive you are no threat.

Predatory bears, on the other hand, should be fought with any means at your disposal. Thankfully, the majority of bear/human encounters is with defensive animals and there’s an easy way to maintain distance with these huge animals. Make noise as you travel through the backcountry. Talk, whistle, or hang bear bells on your backpack. The most experience guides in Alaska simply announce “hey bear” when they approach of section of bush that looks especially beary. The noise will inspire most bears and other animals to move away as you approach. Distance is the key to safety with predators.

Even though bear spray is marketed as a bruin deterrent, this burning liquid can repel all sorts of predatory creatures (including two-legged predators, when used in an off-label manner). This is not a product sold by fear mongers that cater to the paranoid. This is a defensive tool that is a proven deterrent and it’s a smart product to carry in bear country. That being said, it does need to be on your person and accessible to be of benefit. It should never be buried at the bottom of your backpack or left behind in your vehicle. Choose a product that includes a holster and carry it on your belt, on the hip belt of your backpack, or on your bino harness. While you’re shopping for bear spray with a holster, look for EPA registered products too. These will have the maximum percentage of capsaicin, and deliver the most irritation money can buy. It’s also best if the product can spray at least 25 feet, since you don’t want to be too close when using it.

Bears are highly intelligent animals. They are also creatures of instinct. We can’t read a bear’s mind or ask it to compare products for us, but many bear researchers speculate that the orange colorant added to many bear spray products is a significant part of the deterrent action of commercially available bear sprays. Many manufactures don’t even mention the colorant on the product packaging, but it can be seen in demonstration videos. When a screaming human creates an orange cloud that makes a loud hiss and stings a bear’s sensitive nose, the majority of bears tend to flee. Most bears will run away, then turn around and try to figure out what the hell just happened. It’s during this window of the bear fleeing, that you should be quickly backing away (but not turning and running). Now, here’s the game-time decision that will be hard to make when your body is pumped full of adrenalin. Do you unload the whole canister in one shot, or reserve a little for a second spray? Some experts recommend that you never spray the full canister in one shot, unless you have a second spray can holstered and ready to use. Everyone in a party should have bear spray (more on this in a moment).

Many experts from bear country suggest carrying bear spray and a firearm for backup bear defense. Outdoor Life has covered firearms for bear protection plenty over the years, and we’ve also covered concealed carry options for hikers and joggers. If you’re trekking through predator infested country, it’s wise to have a firearm, but you must train with it to be effective.

Predator Attacks Happen in a Flash

All of this planning is useful for preparing for predator encounters. But here’s the grim reality: A true predator attack often happens so quickly that you don’t have any time to react until you’re already in the heat of battle. There’s no warning growl or bluff charge. Just a rush of fur, fangs, and claws.

In this scenario you do the best you can, either playing dead or fighting back and hope that your companions save you. When hunting, fishing, or hiking in areas of high predator populations, it’s always smart to use the buddy system. Talk through possible animal attack scenarios with your partners, check that there’s enough survival gear and first-aid equipment  to go around, and make sure that they are trained with bear spray or firearms, if they’re carrying. A panicking companion with a weapon can be just as dangerous as any predator.