Thirteen Yards in One Second: Why You Can Never Outrun a Charging Bear

(Graphic image warning). Bear attacks sometimes happen so quickly that there's nothing you can do to stop them—and you certainly can't run 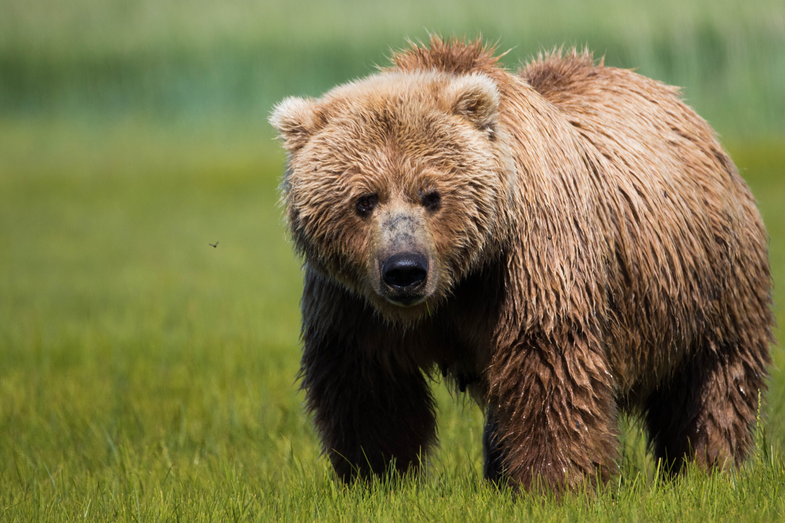 Editor’s Note: We originally told this story back in 2016 when Bob Eder told his chilling account of a brutal bear attack to Tyler Freel, who has spent a lot of time hunting in grizzly country. The story is a sobering reminder that although we may think we have bear safety figured out, reality can be much different.

It seems like every spring here in Alaska, we are faced with stark reminders of how dangerous bears can be. Especially in the spring, after a winter of not really having to worry about it, we can get really complacent. It’s been a somewhat early spring here this year, and already there have been at least two confirmed maulings by either grizzlies or brown bears.

Even though I am in bear country frequently, and have had several close encounters, I also get complacent, because I know the chances are slim that I’ll be attacked when I’m unprepared. The unfortunate fact about bear attacks though, is that if we knew they were going to happen, they wouldn’t.

In that way, bear attacks are a little like lightning. We know when the conditions are ripe for a strike, but we don’t always take the necessary precautions to avoid one. And, just like lightning, by the time you realize you are vulnerable, things happen so fast that it can be hard to avoid the consequences.

I was reminded of this analogy during a conversation with Bob Eder, a friend of my uncle, who survived a brown bear mauling in 2012. His experience really pounded home the seriousness of what can happen when things go very wrong.

Bob was going for a routine hike with his dog on a trail up the mountain above his house in Eagle River, Alaska, when he walked into a perfect storm. He told me he had gotten a ways up the trail and realized he had forgotten his bear spray. Since the likelihood of encountering a bear was low, he decided to continue without it. Just as he crested a rise in the brushy trail, he saw the heads of four brown bears (a sow and three sub-adult cubs) pop up “less than 15 feet” in front of him. He had been making noise, talking to his dog, and even the dog (who usually goes ballistic anytime a bear is near) failed to smell the bears as they approached.

Bob instantly turned around, but before he could take a step, the sow caught him on the back of his head with her claws, ripped open his scalp, and flipped him over. He said that he remembers seeing the bear upside down as she flipped him over but that was the last he saw of her. He said the attack lasted no longer than 15 seconds, but as they tumbled down the hill together, she bit his back and shoulders, slashed his chest with one swipe, and ripped open his thigh, tearing a chunk of muscle out. He told me that the swipe to the head really hurt, but he didn’t really feel any of the other wounds due to shock or adrenaline.

After the bear left, Bob slid down the hill to the trail. He didn’t have cell service and he could put weight on his leg, so he knew he would have to walk out. He took off his shirt and tied it around the wound on his leg, “not as a tourniquet,” he said, but just to hold the wound together as he walked out. He eventually made it down to a private driveway and phone service and was able to direct police officers to his location. He said it was over an hour from the attack to when they found him, but he remembers the entire trip to the hospital. After getting to the hospital, he woke up four days later to find out that they had to give him over 10 units of blood to make up for what he lost, and his body temperature was down to almost 90 degrees.

If you want to read the original news release of Bob’s encounter, click here.

After 12 days in the hospital, Bob walked out under his own power. It took a month of doctor visits, 20 days of antibiotic treatment, and a lot of effort, but eight months after the attack, he completed a half-marathon.

I asked Bob if he thought bear spray would have prevented the attack, but he said there was no way he would have even had time to reach for it, it all happened so fast.

If you’ve seen the movie “The Revenant,” you’ve seen the bear-attack scene. Especially for Hollywood, I think it is pretty dang realistic. When you see the bear’s head pop up, then it charges, well, that speed is no exaggeration. Bears will sometimes charge extremely fast. In a piece I did last year talking about a sow grizzly that charged my buddy Nick and me, we calculated that she covered 13 yards in less than a second. Bears, whether they are black or brown, are extremely fast and powerful animals, much more than we often realize or give them credit for.

Now that the bears are out, it’s time to carry not only some form of bear protection, whether its bear spray or a firearm, but also to keep yourself in a cautious mindset and pay attention to your surroundings. The best thing you can do is try to prevent a situation like that in the first place. Bob told me that he doesn’t have nightmares from the attack, and it doesn’t keep him from hiking and enjoying the outdoors, and although he won’t be leaving his bear spray anymore, the biggest thing is that he is much more cautious and aware of his surroundings. I hope everyone is out enjoying spring in the outdoors, but always remember that a dangerous situation could be waiting right over the next rise in the trail.