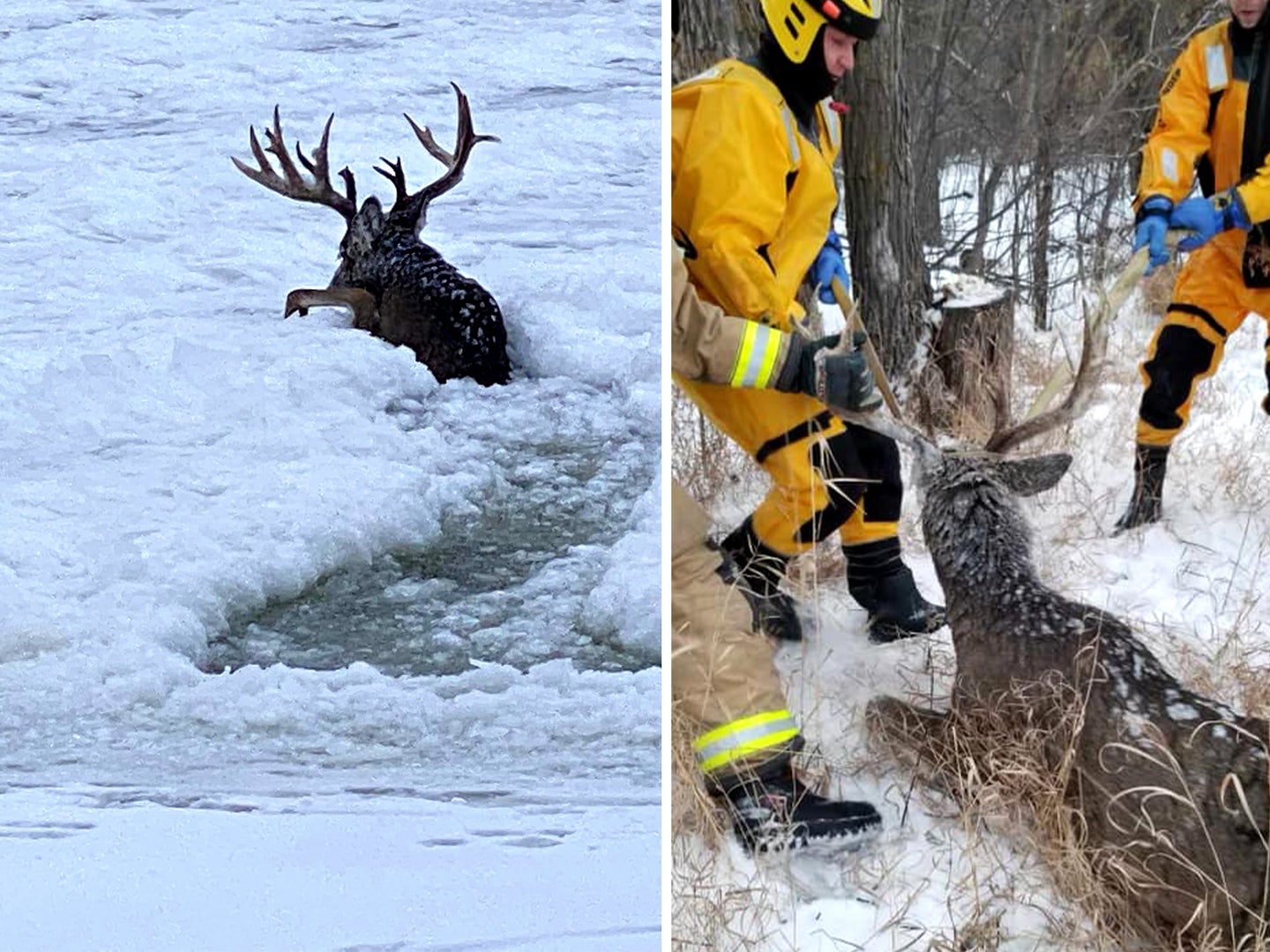 A group of volunteer firefighters in Thief River Falls, Minnesota, rescued a giant, nontypical whitetail from almost-certain death in an icy river on Monday, Dec. 5. The rescue would have been celebrated either way, but the first responders have received extra kudos for saving a trophy-sized buck that was already well known in the local community.

According to Fire Chief Rick Beir, who spoke with the Pine Journal after the rescue, the department started receiving calls about the buck just before 8 a.m. on Monday. Callers reported that the deer had fallen through the ice on the Red Lake River near the Mark Boulevard bridge. After driving to the river to see for himself, Beir assembled a team of 10 firefighters and they got to work. Devin Spears was part of that crew, and he tells Outdoor Life that the buck’s impressive rack caught his eye right away.

“We had gotten these calls about a deer in the river,” Spears says, “and I didn’t think much of it until I got there and was like, ‘Holy cow, that’s a buck.’”

He explains that the rescue itself was pretty straightforward. A few of the firefighters donned dry suits and eased across the ice to get a tow strap wrapped around the buck’s antlers. From there, the crew used brute force to pull the deer out of the frigid water and onto the ice shelf along the river’s edge. They didn’t know how long the buck had been in the water, but it was so cold and exhausted that Spears says the deer was still immobile when they dragged it onto the ice.

“Once we got him out of the water, he just laid on the ice, and we really didn’t know if we were out of the woods yet,” Spears explains. “The thing could just stop breathing at any second being that cold.”

The firefighters then carefully dragged the lethargic buck across the ice and up onto the bank near the edge of the woods. After resting for a couple minutes, Spears says, the buck stood up and slowly walked away. The crew of firefighters was back inside the firehouse by around 8:45 a.m. that morning.

Local citizens, and especially the deer hunters in the community, applauded the firefighters for risking their own safety to help the buck live another day. As Beir explained on Tuesday, the deer was already a known figure in Thief River Falls.

“It’s been a little crazy, for sure,” Beir told the Pine Journal. “And here’s the deal—he was kind of a legend around here anyway. A lot of people have caught him on their trail cameras and things like that. He’s been plastered on Facebook well before this, and all of a sudden—boom—there he is in the river.”

Spears adds that although the firefighters watched the buck walk away on Monday morning, they can only hope that it regains enough strength to survive the winter.

“He’s been a local celebrity almost, and there’s plenty of pictures of him out there from the last month or so,” he says. “Hopefully he makes it until next year, though. We don’t need anyone to shoot him this year.”