Here’s What It Takes to Kayak 2,400 Miles from California to Hawaii, Alone and Unsupported 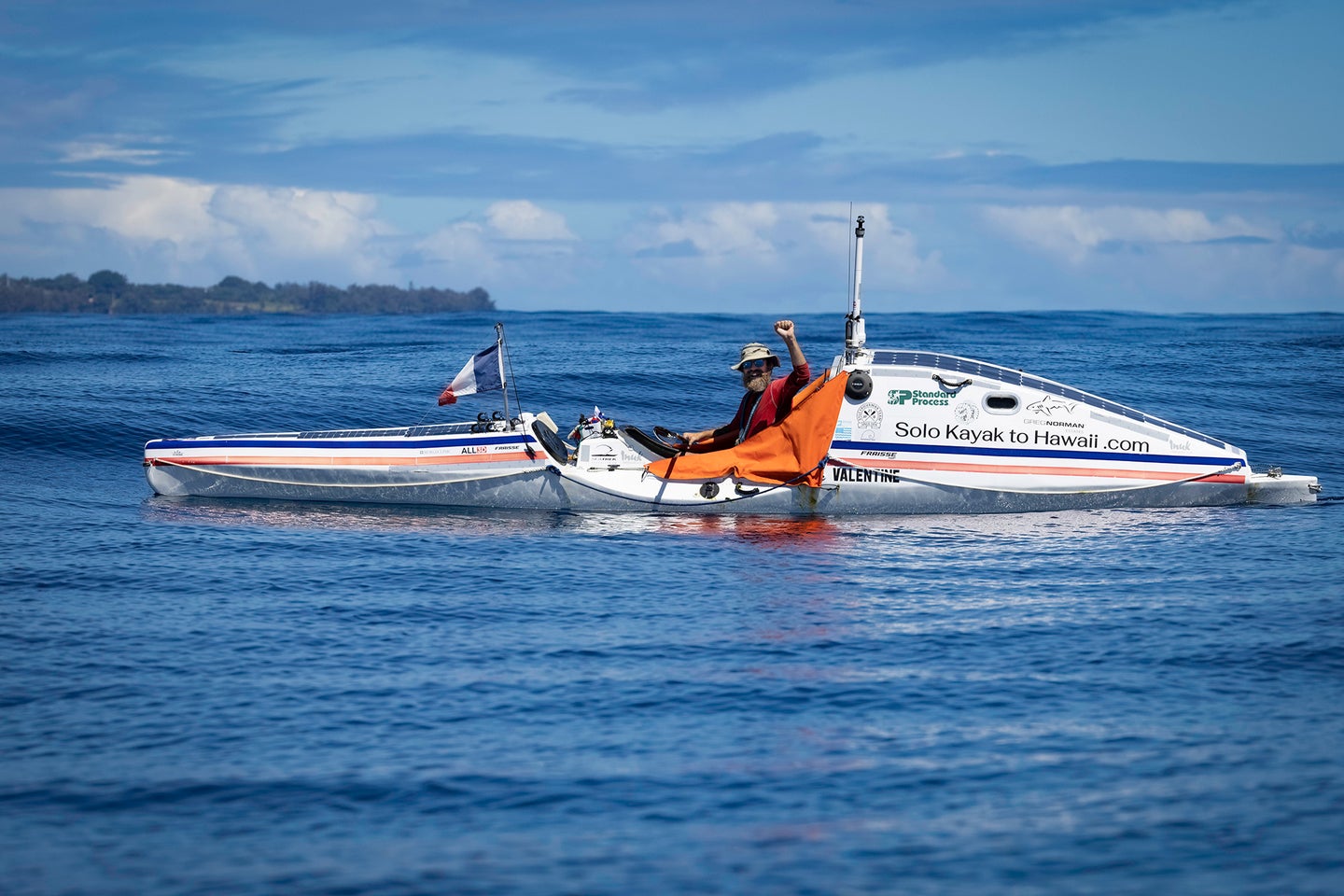 On September 20, Cyril Derreumaux, 46, completed the first-ever solo, unsupported, and 100% human-powered crossing from California to Hawaii by kayak. He had enough supplies to last the entire journey from the start and didn’t use anything but his own body to motor the vessel. Ed Gillet was the first person to make this trek solo and unsupported in 1987, but he used a kite to harness wind at times. I chatted with Cyril recently to learn more about what it took to prepare for a trip like this and what happened once it was underway.

Outdoor Life: What inspired you to make this journey?

Cyril Derreumaux: I only started paddling and kayaking twelve years ago, starting with small races—12 miles and then 40 miles and then longer to 200 and then 450 miles. I just kept pushing my limits more and more. This crossing was a way to discover life and live life to the fullest. I think it’s also a personality thing—you either want to push your limits and do these kinds of adventures or you don’t.

OL: Tell me about what a typical day out on the water looked like.

Cyril: So I’d get up with the sun, usually at around 5:30 in the morning, and it would take me half an hour to get my food and gear, depending on the weather, ready for the day. Then I’d go to the cockpit and spend forty-five minutes desalinating water—at the halfway point of the crossing my electric watermaker broke so I had to use a manual one. After that, I would paddle from 7:30 until noon, take a break for an hour to have lunch and take a nap, then paddle from one in the afternoon until 5:30. After desalinating water for another hour and a half, I’d go back into the cabin and then go through a whole routine of hygiene, taking care to remove the salts from the ocean and taking care of little wounds. Then I’d write the blog for the day and get ready for bed as the sun started setting–-around 7:30 by the time I got closer to Hawaii.

Once I was in bed, I still had to wake up every hour to make sure there weren’t any container ships coming too close to me. I always say the first two weeks are the hardest, because you have to adapt to sleeping twenty to thirty minutes at a time, but your body eventually adapts. You get used to waking up and checking the screen of the GPS really quickly and then going back to snooze.

OL: How did you prepare for this trip, both physically and logistically?

Cyril: Well, you know, there’s no bad weather, there’s only bad gear. So in 90 days, I can have any kind of weather, from really hot to really cold to really wet to really dry. So I had to have the right gear and the choice of gear was really important. Only experience can tell you what to take.

The 23-foot boat itself was created for ocean conditions. It can weather any kind of storm or really strong wind, as it’s a self-righting boat. There are solar panels that charge two lithium ion batteries, and that gives me electricity for all electronics in the boat, including the watermaker, my plotter, my communication satellite. I had to find a builder in England who could make the boat custom for me—it’s nothing like the sea kayaks that are made for going along the coast.

The boat itself isn’t very easy to maneuver—it’s made for going straight—but it can self-righten on its own if you do capsize. I did need to be attached at all times, because if I became separated from the boat it could be fatal. All in all it weighed about 800 pounds.

Physically, it’s mostly the joints and tendons that are suffering when it’s a repetitive motion, but you also lose a lot of weight—fat as well as muscle mass. I had planned for 4,000 calories a day, but I had to ration at the halfway point because I was taking longer than my original estimate of 70 days—but even that was 220 pounds worth of weight, So I had to gain some weight in advance. At the end of the trip, I had lost 20 pounds, mostly in the muscles I didn’t use. I also took some Standard Process supplements, including Vitamin D—as I was covered up because the sun was so strong—and turmeric for inflammation.

In terms of mental preparation, I did a lot of different things. One is that I had a mental coach actually prepare me for what scenarios could happen and how I could cope. I also did yoga meditation and hypnosis with a guru in India to work on my unconscious levels. There’s so many factors that influence the way we behave in our unconscious, and hypnosis can help you create certainties in your mind that you don’t access at the conscious level. For instance, we did a hypnosis session for an hour where we put me under and then I repeated these 20 phrases that I wanted to be ingrained in my mind. You’re doing it…follow your guts…you’re arriving to Hawaii. And then I repeated them every day for four years, just before going to bed. Then, when something happened, those thoughts would come unconsciously. It just broke my fear of not being able to do it.

OL: Did anything unexpected happen on your journey?

Cyril: I saw a lot of wildlife. Mahi-mahi, which are the predators of the sea, hunting flying fish. And the flying fish that were escaping would then be caught by birds as they were flying through the air. And then I saw frigatebirds and albatross as well as dolphins and marlins hunting them. Ninety days at sea, and at such a slow pace, I would see things that people do not normally see. Blue shrimp and squid jumping on the boat and things like that. It was just a beautiful connection with nature.

Cyril: Well, first is recovery, because I’ve lost a lot of muscle mass. I’m 46, so I need to rebuild that over the next six months and work on flexibility and mobility. I’ve lost a lot of that. So it’s going to be yoga and low-impact activities like swimming and biking. And after that, I’ve got a bucket list that is overflowing already. So I want to pick one thing in there and just do it, but I can’t say—otherwise my girlfriend’s gonna kill me.

Editor’s note: This story has been updated to acknowledge Ed Gillet’s crossing in 1987 and distinguish Derreumaux’s feat from Gillet’s.