Watch: As Hurricane Ian Batters Florida, Sharks Are Swimming in the Streets of Fort Myers 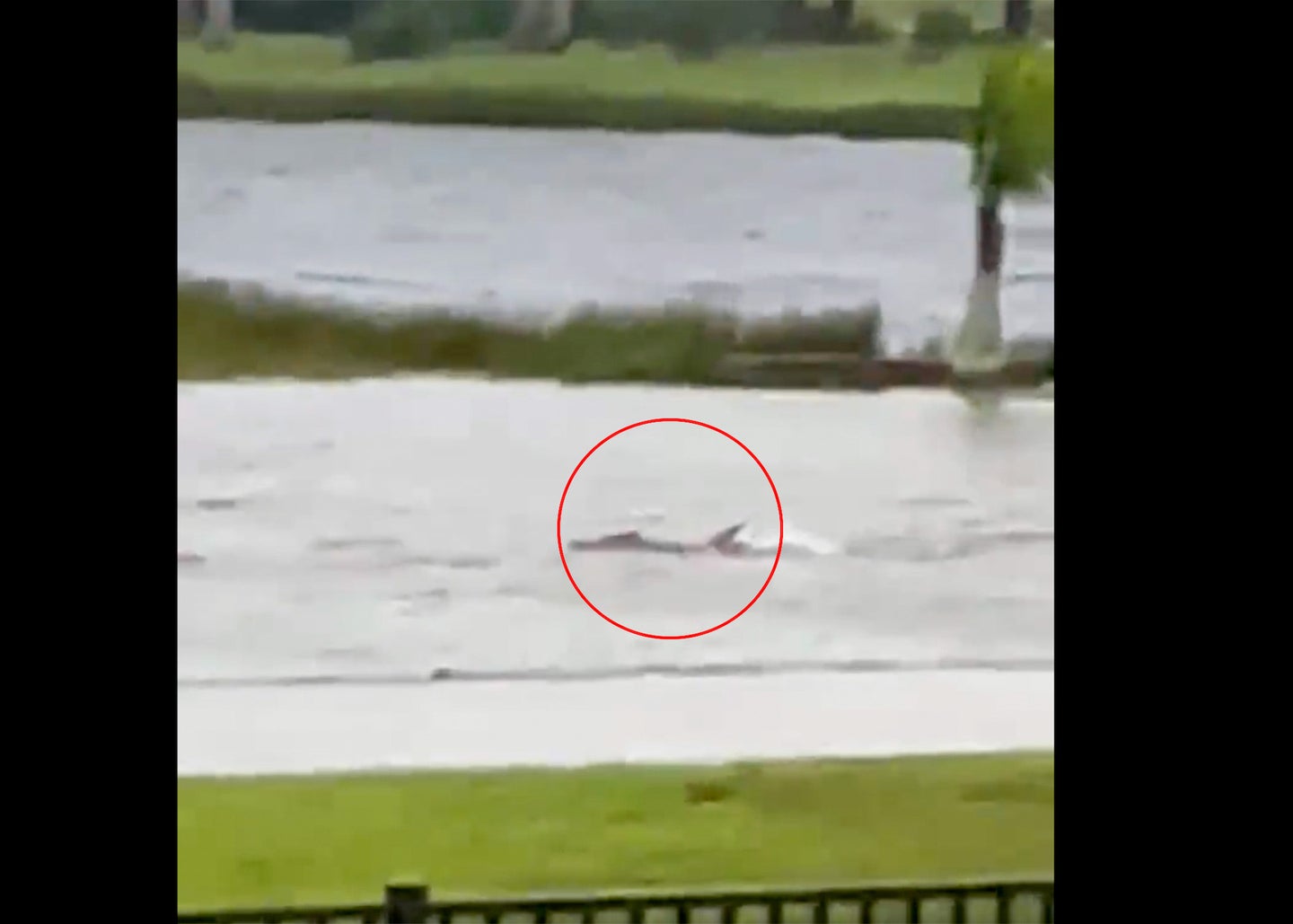 Hurricane Ian slammed into the Florida coast on Wednesday, generating catastrophic storm surges that flooded the southwestern part of the state. The Category 4 storm made landfall near Fort Myers, where record-high surges up to 12 feet swept away vehicles, inundated homes, and carried sharks onto city streets. Yes. Sharks.

There has been plenty of dramatic footage released from the submerged Sunshine State over the last 24 hours, including boats parked in backyards and eerie images of a de-watered Tampa Bay. But this video showing a shark swimming up the streets of Fort Myers might be the most surreal.

@Gutfeldfox somehow a shark ended up in a Fort Myers neighborhood during Hurricane Ian.. 😬 pic.twitter.com/l3WbzgNQHj

Twitter user Brad Habuda uploaded the footage around 1 p.m. on Wednesday, and it’s racked up more than 11 million views since then. The 10-second-long clip shows two raging rivers where a neighborhood intersection would normally be. A shark is swimming in the middle of the smaller stream with its dorsal fin and tail exposed, and after thrashing its way up the roadway for a few seconds, it appears to turn around and head back toward the main underwater boulevard.

Wildlife displacement is typical during major hurricanes, especially in the low-lying regions of southwest Florida. The Florida Fish and Wildlife Conservation Commission warned Floridians before Ian made landfall that there was potential for alligators, manatees, snakes, and other animals to move inland during the storm. The agency did not mention sharks in their warning, however, which is a testament to just how powerful this hurricane was.

Although Ian was downgraded to a Category 1 tropical storm on Thursday morning, it was approaching Category 5 status as it neared the Florida Coast on Wednesday. Aside from the record levels of flooding it caused, the hurricane generated 150-mph winds that wreaked havoc on local communities and cut power to roughly 2.5 million people. Thousands of residents became trapped in their homes, and some were unable to evacuate in time as causeways were destroyed and bridges were blocked off.

One of the storm’s first fatalities was a man who drowned in Deltona, according to NBC News. Lee County Sheriff Carmine Marceno told reporters this morning that the total number of fatalities is already in the hundreds, but he explained that they still haven’t been able to assess the full extent of the damage.

“While I don’t have confirmed numbers,” Marceno said, “I definitely know fatalities are in the hundreds. There are thousands of people that are waiting to be rescued.”

Officials have already confirmed that Hurricane Ian is one of the five strongest hurricanes to ever hit the Florida coast, according to Tampa Bay 10 News. President Biden approved a disaster declaration for Florida on Thursday morning, which will direct federal resources to support response and recovery efforts in the aftermath of the storm.