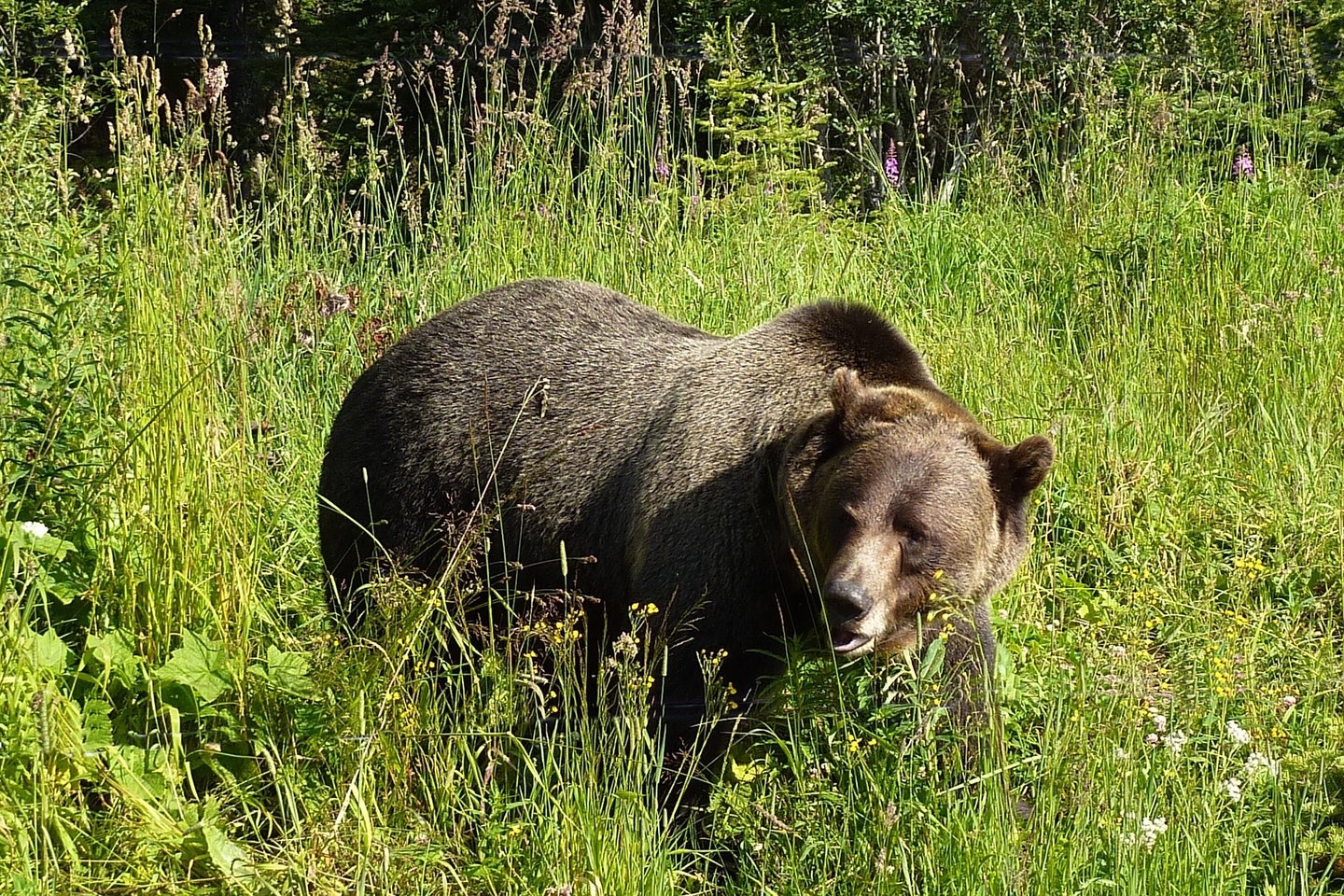 The griz thought to have mauled and killed a camper in Montana was likely more than 400 pounds.
SHARE

UPDATE: Montana wildlife officers caught and shot a grizzly bear the morning of July 9 near the town of Ovando near where bicyclist-camper Leah Davis Lokan was dragged out of her tent and killed by a bear on July 6.

The bear was shot by officers less than two miles from Ovando, reports Montana Fish Wildlife and Parks (FWP). The bear was trapped while trying to raid a chicken coop, which was “similar in nature to the one that happened in Ovando the night of the fatal attack,” said the FWP in an announcement.

Game officers believe the bear they captured and shot is the same animal because of evidence found at the scene, and it was a second chicken coop raid. DNR analysis of the grizzly will take several days to confirm if the bear shot is the same one that killed Lokan.

A second chicken coop raid occurred the night of July 7, about 48 hours after the attack in Ovando. FWP personnel set a trap at the second coop on Thursday and USDA Wildlife Services specialists were monitoring the trap Thursday night when the bear approached and was shot.

Wildlife Services specialists were assisting at the request of FWP officials, anticipating the bear would return to the coop. They used night vision technology to aid in shooting the bear. As a precaution, FWP staff will keep at least one trap set near the first chicken coop on the outskirts of Ovando.

The 65-year-old Leah Davis Lokan, was a registered nurse from Chico, California, according to CBS News. Lokan was camping for the night when she was pulled from her tent by the bear at about 3 a.m. and killed. It was the second time the bruin had entered the campground, which is located near the town of Ovando, 75 miles northwest of Helena.

Lokan and two companion campers in another tent were awakened on the bear’s first visit to the campsite. They took food out of their tents, secured the food, and went back to sleep.

Lokan was killed about 30 minutes later during the bear’s return visit. She was pulled from her tent by the grizzly. Other campers used bear spray to chase it away, and called 9-1-1. Members of the Ovando emergency-response teams tried to save the victim.

Surveillance video from a business in town showed the bear about a block from a post office about 15 minutes later, wildlife officials said. The bear is also believed to have entered a chicken coop in town that night, killing chickens.

The attack triggered a concentrated hunt for the bear by wildlife officials and law enforcement officers, who planned to kill the animal. The area was searched by helicopter for the grizzly Wednesday, but it was not found.

“Our best chance for catching this bear will be culvert traps set near the chicken coop where the bear killed and ate several chickens,” said Randy Arnold, a Montana Fish, Wildlife and Parks regional supervisor.

Greg Lemon with the state Wildlife department said the bear will be killed if found. Authorities have DNA from the bear to make positive identification of the animal responsible for the attack.

Lokan was an experienced long-distance bicyclist, and was accompanied on the trip by her sister and a friend.

Ovando is south of Glacier National Park, a sprawling wilderness reaching into Canada. The park is home to an estimated 300 grizzly bears.

This is the second grizzly attack that resulted in a human fatality in Montana over the last four months. Charles Mock, a backcountry guide, was mauled and killed by a grizzly in April in West Yellowstone Park. Back in July 2020, Shannun Rammel survived an attack by a grizzly inside a barn near Choteau. And a few months later a hunter was attacked in September by a female grizzly and her cubs near Flattop Mountain outside Big Sky.

MFWP has warned that more bear-human conflicts are likely as folks push further into bear country. The agency says outdoorsmen and women should protect themselves at all times and be aware that bears are in the area. Grizzly populations are expected to continue to grow as the bears are federally protected under the Endangered Species Act in the Lower 48. The USFWS lifted protections for grizzlies in the Greater Yellowstone Ecosystem in 2017, but was forced to reimplement them in 2018 after a federal court ruling.