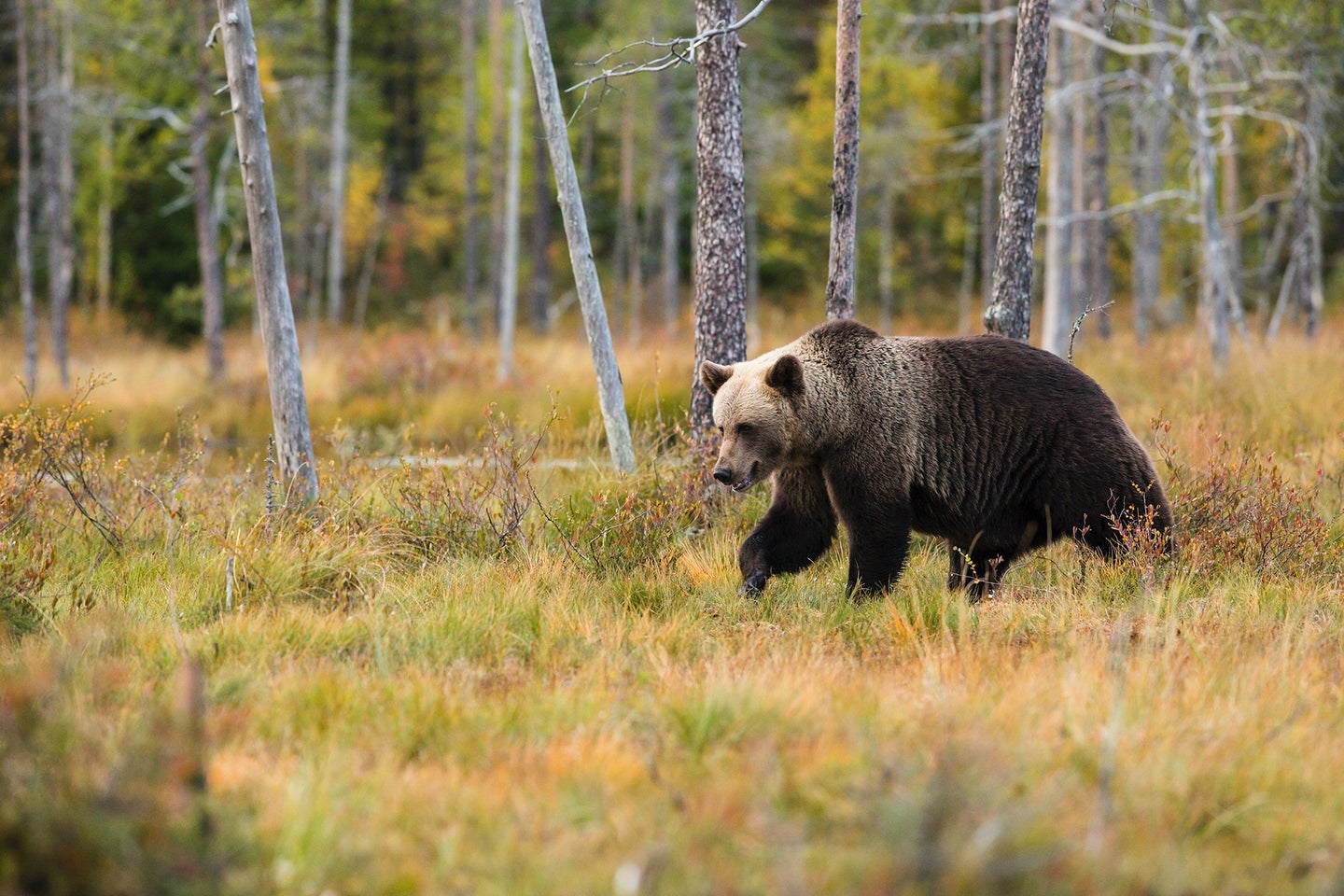 The best bear spray will stop a charging bruin in its tracks. Here’s how to choose one.

If you’ve ever had the misfortune of touching your eyes (or other mucous membranes) after handling or slicing hot peppers, you know exactly why bear spray is so effective.

Bear repellant is a pressurized aerosol containing around 2 percent capsaicinoids—the compounds that gives peppers their characteristic hotness. That intense burning sensation is enough to stop a charging bear. A 2008 study in the Journal of Wildlife Management reported that bear spray stopped brown, black, and polar bears 92 percent of the time. A whopping 98 percent of people who used bear repellant in self-defense walked away uninjured.

Those stats are even more impressive when you consider that half the people who use a firearm to defend themselves against grizzly bears suffer injury, according to the U.S. Fish and Wildlife Service. In fact, experts say your odds of sustaining a serious injury are doubled when you face a charging grizzly with a firearm instead of bear spray.

Of course, human injuries are paramount, but aren’t the only valuable measure. Bear repellant also protects bears by reducing how many are injured or killed in self-defense. That double-barreled ability to defend humans while not impacting bear populations is why wildlife experts recommend carrying bear spray when you’re in bear country. It’s just one of many ways to protect your self against a bear attack, but certainly one of the safest and most effective.

Bear spray might remind you of the self-defense pepper spray people carry on their key chains—and it does rely on the same ingredient, those eyeball-burning capsaicinoids—but unlike those everyday carry sprays, bear repellent is regulated by the Environmental Protection Agency (EPA). This ensures the product is formulated for maximum effectiveness against the target animal while still being humane. Bear spray contains between 1.3 percent and 2 percent capsaicinoids.

Ideally, a user deploys bear repellent when a charging bear is still 30 to 60 feet away. That forces the bear to run through a big burning cloud of capsaicinoids, which will cause the bear to back off before it gets to you, so the spray must have an effective range. And since the goal is to put up a big cloud of capsaicin between the user and the bear, the canister should be large enough to accommodate the amount necessary to produce that fog—and have enough left over to keep spraying directly at the bear, if it persists. Experts recommend choosing a product with a canister that lists a spray time of 6 to 9 seconds, and provides a spray range of 25 feet or more.

It’s crucial to pick a product specifically designed to be effective against charging bears. The best bear spray will be easy to carry, quickly and easily accessible, and optimized for the proper spray duration and reach. Different products have various attributes, so read on to find the best one for your particular need.

Is Your Bear Spray Accessible?
Picture this: an angry sow grizzly is charging you. If your repellent is at the bottom of your backpack, underneath a mess of energy bars and camping gear, that’s where it’s going to stay while the bear mauls you. A spray must be designed for easy access, such as in a holster that you carry on the outside of your clothing so you can access it immediately.

Bears don’t look like fast animals, but they are. A charging bear can reach 35 miles per hour. That’s a little over 50 feet per second. It’s easy to see why fast and easy access to bear spray is key to effectively deterring a charging bear.

The best way to ensure accessibility is to wear your bear spray in a holster on your body. In general, you can choose between two holster types. A belt holster slips over your regular belt and keeps the spray at your waist level. A chest holster straps around your torso via a belt that crosses over your back. Keep in mind that bear repellent canisters are fairly large by design, so you’ll want to pick the carrying option that’s most comfortable for you.

Some products include a practice canister. While spraying a can is straightforward, the moment a thousand-pound animal is barreling toward you is probably not the ideal time to try it out. A practice canister operates the same as the regular canister but contains pressurized water, so you can familiarize yourself with how to operate spray without actually deploying the product.

How Long Will It Spray?
A product’s spray time tells you how long you can spray before emptying the entire canister—and when it comes to bear deterrent spray time, longer is better. Those longer spray times give the user more room for error when deploying the product. That’s important because bear repellant is something people don’t use often. Depending on weather and wind conditions, you may need to adjust your aim and body position to put up the most effective cloud, and longer spray times ensure you have enough product to do that.

Look for a product with a spray time between 6 and 9 seconds. Some bear repellents offer multiple spraying options so you can deploy the product in short bursts, or empty the entire canister with a continuous spray. This versatility makes it possible to respond flexibly in a crisis, so you can put up a thick cloud of bear deterrent and then prepare to spray the bear directly, if it charges through or around the fog.

What’s the Range?
Of course, time isn’t the only consideration when it comes to bear repellant. Range is an important consideration when evaluating bear deterrents. Under ideal circumstances, you should begin deploying bear repellent when the charging bear is 30 to 60 feet away, so you have time to put up that cloud well before the bear is close enough to make contact

While some sprays offer a minimum of 15 feet effective distance, experts recommend choosing a bear spray with a range of at least 25 feet. Some products exceed this recommendation, reaching distances of 30 to 35 feet under ideal conditions. Wind can significantly affect the performance in the field, so pick a spray with a long effective distance if you’ll be in a windy area. A long effective spray distance ensures you can defend yourself even under terrible conditions—like a bear barreling toward you with the wind at your face.

How Long Will It Last?
Bear spray works because the contents are under pressure, providing those long spray distances when activated by the user. However, pressurized canisters lose pressure over time, becoming less effective as they age.

Know the shelf life of a spray before you buy, but also look for the expiration date on the canister, since time may pass between the date of manufacture and the date of purchase. Bear repellent with shelf lives of three or four years may be a good value since these products can last over several seasons and won’t need frequent replacement.

Note that conditions such as extreme temperatures or rough handling can affect the life of the product. It’s important to inspect the canister every year and replace the product if it appears damaged.

Does the Bear Spray Holster Suit Your Needs?
As we mentioned earlier, bear spray must be easily accessible. But portability is another factor. A canister left at home because it’s too awkward to carry or otherwise take with you is totally useless.

Think about what you’ll be doing in bear country—hiking, fishing, hunting, biking—and choose a bear repellent that easily accommodates your activity. For instance, if you’re on a mountain bike, you may not want to carry spray that can only be carried on a belt. That’s when the holster that comes with the spray is just as important as the spray itself.

This SABRE bear spray offers multiple purchase configurations so the user can select between a quick-access belt or chest holster, a practice spray canister, or an additional canister. It has 9.2 ounces of bear-stopping power. It deploys 1.84 ounces with each one-second spray over a 35-foot spraying distance.

This Guard Alaska bear repellent has a fogger delivery system which deploys bear deterrent at distances up to 20 feet from the user and has two firing options. That means you can spray in controlled bursts, or use the actuator system to empty the entire 9-ounce can in a single 9-second continuous spray. This repellent is endorsed by the Alaska Science and Technology Foundation.

After removing the orange safety tab, the Mace Bear Spray canister sends a cloud of capsaicinoids out to 35 feet. That makes it a good choice for anyone frequenting extremely windy bear country.

This Counter Assault bear spray comes in a leak-proof canister and remains effective for four years, extending the amount of time between replacements. It also produces a generous 7-second continuous spray and is the greenest option on the market as it meets the basic EPA standards plus the standards for the Clean Air Act.

This 2 percent capsaicinoid bear spray reaches up to 30 feet. The included holster includes a clip, making it simple to carry the spray on a belt, a waistband, or a backpack strap. The holster has two mounting holes that allow it to be mounted on a bike, in a vehicle, or on a boat.

Bear spray was first developed in the 1980s as a part of the University of Montana Border Grizzly Project, run by Charles Jonkel and Carrie Hunt. Since that time, several companies have stepped into the bear spray market. Here’s a look at some of the brands that make up the industry.

Counter Assault
Counter Assault isn’t just a company that sells bear spray; it literally assisted in developing the first repellent that ever existed. The company’s founder, Bill Pounds, worked on the University of Montana Border Grizzly Project to produce the prototype for the first bear spray. Pounds began selling the product in 1986, and in 1998, it became the first EPA-registered bear spray. With that significant history in research and development, it’s no surprise Counter Assault is a leader in the bear repellent industry.

SABRE
SABRE was founded by Larry Nance in 1975 to produce tear- gas defense sprays. Eventually, the company diversified to include pepper sprays, fire extinguishers, personal alarms, stun guns, and bear sprays. They introduced their Frontiersman line of EPA-approved bear spray in 1998. Sabre prides itself on giving back to the community and donates some of its proceeds to the National Breast Cancer Foundation (NBCF) and the Rape, Abuse, and Incest National Network (RAINN).

Mace
Mace Security International formed in 1965 after founder Allan Lee Litman invented an aerosolized pepper spray for his wife to carry after being threatened on the street. The public company focuses exclusively on personal defense and security products, including its EPA-approved bear spray.

Bear spray is one of those tools that you hope to never actually have to use, but having a canister with you is imperative if you frequent places with bear activity. Picking the best bear spray boils down to three things: a product optimized to stop a bear in its tracks, enough power to stop that bear well before it reaches you, and a method of easy access so that you can quickly and easily use it in an emergency. It’s one of those camping accessories you may never need, but when you do, you’ll be glad you had it.