Turn pheasant or venison into a classic fried dish 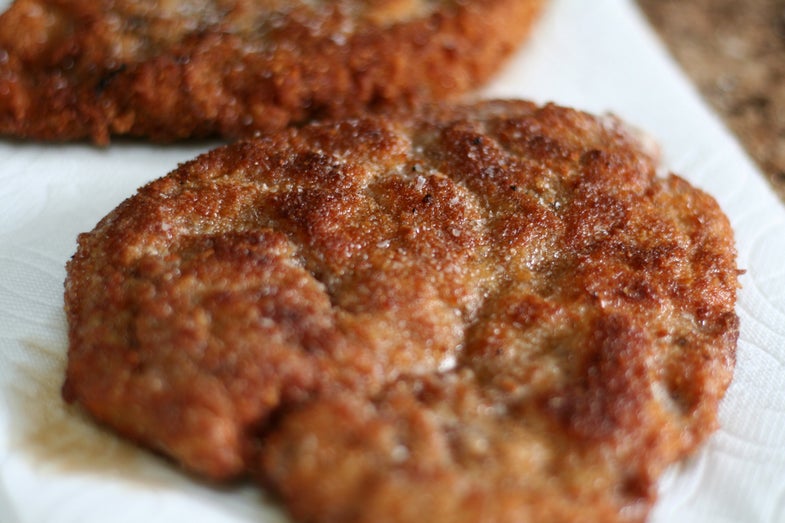 Back in February I was invited to cook on the Gander Mountain cooking stage at Pheasants Forever’s annual Pheasantfest. It was a great experience for me, and I got to meet and hang out with some incredible people. At the end of the weekend we had a good amount of pheasant left over, so I was able to bring some home. I wasn’t sure what to do with all that meat, but one of my first thoughts was to make a pheasant schnitzel. The more and more I thought about it, however, I thought maybe schnitzel has been covered before and most people are familiar with it. I did a quick Google search to see if there were any variations on schnitzel that might be interesting—and was overwhelmed with options.

I assumed it was a German dish, but schnitzel actually originated in Austria. Schnitzel is a broad term that basically means some kind of meat has been pounded thin with a mallet and then breaded with flour, egg wash, and bread crumbs, and finally fried in butter. It’s usually served with some kind of potato and a wedge of lemon. What I didn’t know is that just about every country and culture has a version of schnitzel. Here in the Midwest, the popular breaded pork tenderloin sandwich is really just a schnitzel on a bun. Chicken-fried steak is also basically just a schnitzel with a sausage gravy.

In parts of Scandinavia, schnitzel is made with reindeer or pork and served with anchovies and capers. There is a version called Walliser Schnitzel that is popular in Switzerland that isn’t coated in breadcrumbs, although it’s still fried, then covered in tomato sauce. There are even vegetarian versions made with tofu or veggie patties. Wild game is used quite often and versions using venison, wild turkey, wild boar, and upland birds can be found all over the world. One of the versions that caught my eye was a German style dish known as Rahm-schnitzel. It is usually made with pork and involves a black pepper cream sauce that sometimes has mushroom in it. For my Rahm-schnitzel, I pound out some pheasant breasts, then breaded them and fried them in butter. For my black pepper cream sauce, I added dehydrated puffball mushroom powder to give my cream sauce a nice, earthy taste. Served alongside a lightly-dressed salad, it made for a perfect lunch.

2 pheasant breasts (pounded out to about 3/8 inch thick)

Pound the breasts to desired thickness and then season with salt and pepper. Dredge in the flour then the egg and finally the bread crumbs until the whole piece of pheasant is coated. After they are coated, let them sit for a couple minutes before cooking. This will help the breading set and stick to the meat. Heat the butter over medium heat, then fry the breasts for about 3 minutes per side until the breading is golden brown. Remove the breasts from the oil and make your sauce.

In a sauce pan, add a couple tablespoons of the butter you just fried your pheasant in. turn the heat up to medium high and then stir in the garlic. Cook the garlic for about 30 then add the black pepper and the mushroom powder. If you don’t have mushroom powder you can use ½ cup of fresh cremini mushroom, thinly sliced. Cook for one more minute, then add the cream. Cook the cream mixture for about 5 minutes or until it starts to thicken up. Season with salt and serve over the fried schnitzel.