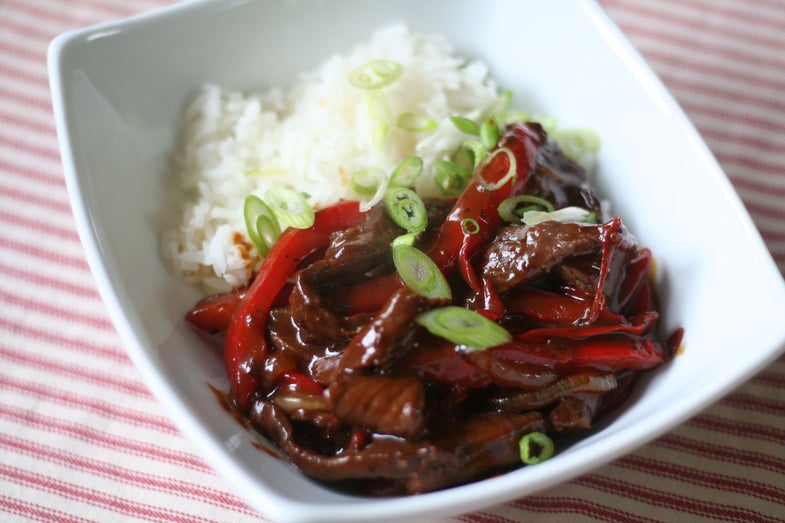 I am a huge fan of using wild game in Asian cuisine. The flavors and cooking methods work well with all varieties of wild game. For example, different stir-fried dishes and curries hold up well with the addition of wild game, especially venison. When I was a kid, there was a restaurant in my hometown of Rochester, Minn., called the Hunan Garden. It was, and still is, one of my favorite places to eat, and I order the same thing practically every time I go: the Chinese pepper steak.

Pepper steak is really nothing more than bell peppers and marinated strips of beef. It is a remarkably simple dish to make, but when done correctly, it can trigger an addiction that leaves you craving more. The dish starts with meat, traditionally a round steak or a similarly tough cut of beef. By slicing it thin and cooking it on high heat for a short period, you end up with incredibly tender and succulent strips of meat, complimented by sweet and slightly crisp red peppers.

The way I make my venison pepper steak starts with adding a little bit of homemade habanero sauce to the venison, so there’s the perfect balance of sweet to heat. In order to get very thin slices, I like to leave the meat slightly frozen. This makes it possible to cut each strip into sections about 1/8-inch thick. Served alongside rice and topped with green onions, this recipe is truly hard to beat.

In a large bowl, combine the brown sugar, soy sauce, wine, cornstarch, and black pepper. Stir until all the cornstarch is dissolved and then add the venison strips. Allow to marinate for at least 30 minutes, but no more than an hour.

When you are ready to cook the vegetables, heat 2 tablespoons of the peanut oil over high heat in a wok or large skillet, then add the peppers, onions, and garlic. Cook for 3-4 minutes or until the onions are translucent. Remove the pepper and onions from the wok and place in a bowl for later use.

For the venison, heat the remaining 2 tablespoons of oil over high heat and stir-fry the venison strips with all of the remaining sauce. Cook for 4-5 minutes, then add the ½ cup of chicken stock and stir.

Add the peppers and onions back into the mix and toss to combine. Serve alongside rice and garnish with thinly sliced green onions.

RELATED: A Recipe for Japanese Pancakes Made with Wild Nettle and Ramps