A juicy and tender duck dish that only requires three ingredients 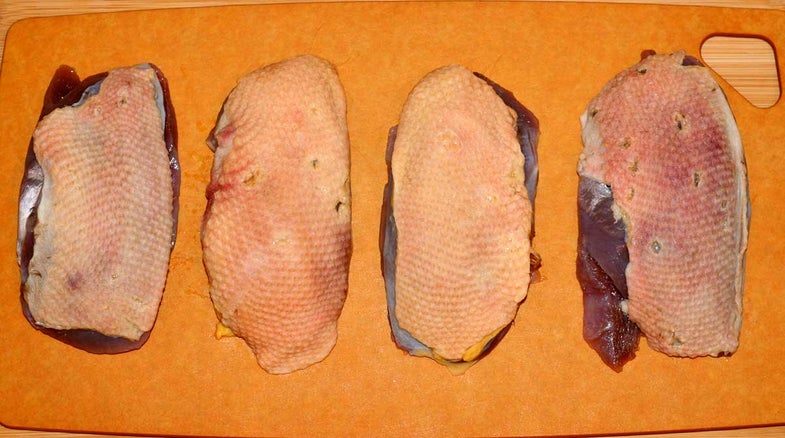 Wild duck breasts, with the skin on. Jamie Carlson
SHARE

Last week I had the great fortune of meeting Marcus Samuelsson, a world renowned chef and cookbook author. Marcus was born in Ethiopia and adopted by Swedish parents and has settled in New York City. He has an extensive history of fine dining and is a brilliant chef. I have several of his cookbooks at home and knowing that I was going to meet him, I grabbed one of my favorite books of his, Aquavit. Aquavit was one of Marcus’s first restaurants (and also the title of his first book). The book features mostly Scandinavian cuisine, with influences from around the world mixed in.

So the question I am sure you are asking yourself is, “What does any of this have to do with cooking wild game?” Well, as I flipped through the book I couldn’t help but notice how many of the recipes were for wild game—or could be easily adapted to wild game. There were a number of duck recipes that I had forgotten were in there, and a whole bunch of recipes that I can’t wait to try should I get a deer this year.

One of the recipes that stood out was one that I had tried nearly a decade ago for a cured duck breast. It is a very simple recipe, but simple doesn’t mean bland. There are only three ingredients for the cured duck breast: duck, water and salt. After brining the duck for 6-8 hours, you sear it in a pan until the skin gets crisp. Then you pop it into the oven to finish. What you end up with is a brilliantly-cooked duck breast that’s juicy and tender. The first time I made it, I chilled the duck, sliced it thin, and made sandwiches with pepperjack cheese and onion marmalade. This time I chose to serve it hot with apple butter mustard and a mixed green salad. It was out-of-this-world delicious.

Method Preheat the oven to 400 degrees. Stir the salt into the water until it dissolves, then pour the salt water over the duck breasts and let sit in the fridge for 6-8 hours. After the breast have been brined, remove them from the water and pat dry. In a lightly oiled pan, place the breasts skin-side down over medium high heat and cook for about 4 minutes until the skin starts to crisp and turn lightly golden brown. After about 4 minutes turn the breasts over and then place the pan in the preheated oven for 8 minutes. Remove from the oven and let stand for about 5 minutes then slice the breast and serve.

You can either eat them as is or serve them with any kind of sauce you would like. A nice fruit chutney would work, or you can try this apple butter mustard.

Combine all ingredients in a bowl and let stand in the fridge for at least 30 minutes before using.