5 Ways to Kill Your Hunting Dog

Watch for these common canine hazards, or else your best friend could find himself in a dangerous situation 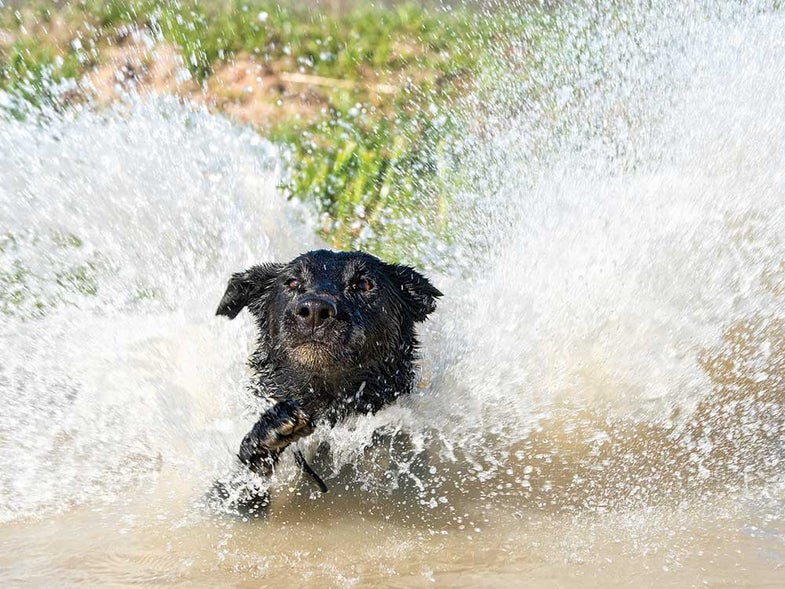 Watch out for these Canine Hazards. Stephen Maturen
SHARE

Working dogs are on the front lines—literally—of almost every bird hunt. The safe return of your canine companion defines a successful hunt, whether you bagged any birds or not. Spend enough time behind your dog, and you’ll eventually have to steer him around or through danger. Here are some common—and uncommon—ways you might endanger your dog in the field.

1. SEND HIM INTO AN ICY RIVER
Most waterfowling north of the Mason-Dixon Line takes place in freezing weather. Lakes can be wholly or partially frozen, and rivers can run fast with frigid water. Keeping your dog out of trouble in cold water starts with restraint: Don’t shoot birds if they might drop in strong, swirling current. If you must send your dog into swift water, scout a downstream extrication spot, a place with calm water and low banks. And if the river is rimmed with ledge ice, don’t send your dog in at all. It’s too easy for him to get sucked under the ledge by the current.

Be aware of winter’s changing conditions. I lost my Lab last year (see “The Slough”) when she broke through the ice of a slough that we had hunted together dozens of times. The ice was thinner than I expected, and the water in the slough was unseasonably deep. By the time I broke the ice to reach her, she had drowned.

Prevention: Be aware of changing conditions, and avoid both thin ice and swift water.

2. IMPALE HIM ON A SPEAR
I was hunting greenheads with a friend and his hard-charging Lab in Idaho’s Snake River. We were set up on a cutbank, and Buddy had made a half dozen retrieves by vaulting off the bank. Taylor dropped a mallard, and Buddy leapt off the bank—right onto the submerged end of a wrist-sized willow tree that had been gnawed by beavers. Buddy was impaled by the nib, and by the time we pulled him off, he was dead from blood loss and internal injuries.

Prevention: Scout not only water exits for retrievers, but also water entries, and ensure there are no underwater hazards.

3. LET HIM INHALE GRASS
Can grass really be a danger to dogs? Yes, if that grass has a sharp seed with barbed hairs that point away from the seed’s spear point. Seeds with these characteristics are called awns, and they are produced by familiar species: cheatgrass, foxtail barley, and wild rye. A dog can inhale the seed heads, which work into the lungs and then create thoracic cavity trauma that can lead to fluid in the lungs. If untreated, the internal injury can lead to pneumonia.

Prevention: Know the species that produce awns, and reduce training and hunting in CRP fields with ripening awns. Take your dog to a vet if he exhibits a sustained low-grade fever and ragged breathing.

4. OVERFEED HIM
One of the gospels of in-season dog care is to feed following the hunt, not before. One reason for that mandate is to prevent bloating, which can lead to gastric torsion. In this condition, sometimes called “gut twist,” a dog’s stomach can actually rotate inside the abdomen, causing gas buildup in the stomach, cutting off food passage in the esophagus, and eventually leading to a catastrophic drop in blood pressure and death, often within an hour if untreated. Causes of gastric torsion vary, from consumption of fermenting food to too much hard work shortly after feeding.

Prevention: Do not feed your dog prior to a hard hunt or training session.

5. OVERHUNT HIM
I was hunting sharptail grouse with four buddies on the sprawling grasslands of the Medicine Lake National Wildlife Refuge in eastern Montana. Three of us had young, energetic dogs, and two had older, arthritic dogs. Larry tried to hunt his old Lab with the young dogs, sending him across big fields of open grass with little shade. We were about 3 miles from the pickup when Larry’s dog collapsed from exhaustion and heat stroke. We took turns carrying the 85-pound Lab back to the truck.

Prevention: Prepare your dog for the season, and know his limitations. Carry plenty of water and take frequent breaks.