Top Dogs: 5 of the Hardest-Working Gun Dogs in America

Think your dog is a pretty good hunter? Take a look at these canine heroes

Ask any two hunting dog owners and you’ll get at least three opinions on what makes a good dog. Anyone foolish enough to scratch down a “definitive” list, whether by breed, species hunted, or trial points obtained, is writing his own epitaph.

But you’re not much of a dog owner if you don’t believe your dog is pretty darn good. Puppyhood, training, and sharing the field forge a proprietary sense in both parties. The magical link between two predators working together has a legacy that traces back to stone-tipped spears and prehistoric campfires.

But is your dog among the elite? Luminaries of the gun-dog world nominated our first five canine heroes, and the traits they cited are worth emulating by dogs and their owners alike: independent thinking, problem solving, and a mental and emotional connection. And finally, an overriding force of will, a mission: Get the bird.

“A female Lab with lots of drive” is a phrase seldom heard in the hardcore retriever world. Sadie, however, breaks the mold, says her owner, veterinarian Ira McCauley. “She wants to please me as much as she wants to hunt,” he says, combining a classic female Lab trait with the defining characteristic of a hard-charging male.

Sadie was the runt of her litter, but she has turned out to be an explosive dog. She takes a lot of the bad—vicious weather, long marks, recalcitrant cripples—with the good, and just keeps going. “In the marsh, she’s always looking skyward,” says McCauley. “Even a blind guy would know when ducks are getting close. Her tail is always beating against the side of the blind. The nearer the ducks get, the faster her tail wags.”

All In A Day’s Work // On a recent spring hunt, Sadie delivered almost 200 snow geese to hand. McCauley ran into some friends on the way out of the field, and Sadie followed them back to hunt the afternoon flight.

On another occasion, during a break in an otherwise action-packed morning, Sadie broke and bolted, hell-bent on the distant horizon. McCauley quickly gave a single blast on his whistle in an effort to turn his dog, but then he tucked it back into his parka. He realized that Sadie knew something he didn’t. Four hundred yards later, she scooped up a dead honker and toted it back to the blind.

Defining Moment // A well-known outdoor writer once wing-clipped a duck on Sadie’s watch. “We saw the bird sneak into the reeds on the bank,” says McCauley. “From water-level, Sadie couldn’t see it. She hit the shoreline 10 feet to the left of our mark. The writer dismissed her, figuring she’d lost the duck, and strongly suggested I handle her in the other direction. I told him that if the bird was where he thought it was, she’d have gotten it already.”

Once in the brush, the greenhead had skulked in the opposite direction, as the chagrined writer learned when Sadie emerged with it, triumphant.

Personality // “She has no off button,” says McCauley. Sadie is in the blind waiting to hunt before her owner can slog his way there. She’s a great family dog and mother. “I’m lucky to have her.”

The Look // Sadie’s unblinking gaze is like that of a cougar, ready to pounce. Muscles taut, head low, a laser-like focus telegraphs a vigilant, expectant attitude. Looking at that face, you know a mere whisper of her name will trigger a splashing, panting retrieve.

“My first bird-hunting experience was flushing quail in front of my cousin’s setter. I’m fortunate to have a dog from the same line,” Jordan Martincich says of Kate, whose lineage includes Tekoa Mountain Sunrise, a Bird Dog Hall of Fame sire. “She will jump through a wall of fire to get a bird. I highly doubt I’ll ever have a dog like her again.”

Kate is always ready to push another field, even if the human hunters are not. “She might be 12 years old, but she thinks she’s six months. Two years ago, her veterinarian said it would be her last season, but she’s going to hunt again this fall,” he says, laughing.

All In A Day’s Work // One bone-chilling day last fall in north-central Kansas, Kate and a pack of younger dogs hunted hard for pheasants and bobwhites. Toward the end of the day, as the young ‘uns shivered their way back to their crates, tails tucked, Kate was still focused on finding birds. In prior seasons she’s hunted in seven states, despite the fact she’s eligible for doggy Social Security.

Defining Moment // A wheat stubble field is bad enough, but this one in western Kansas on a 2013 pheasant hunt was infested with sand burrs. Nobody had thought to bring booties, and other dogs were coming up lame or refusing to tread another step. Kate “blocked out the pain and hunted the rest of the field as other dogs were carried back to the truck,” says Martincich.

Personality // “She’s my copilot,” says Martincich. “But if I’m not persistent when handling her, she’ll walk all over me.” Regardless, either hunting or lolling on the couch, “she’s just a joy to be around,” says her owner.

The look // An elegant, fine-boned, feminine-looking dog, Kate has an intensity that comes to the fore when on point. Intense, high head and tail, her field-trial breeding shows, but it’s tempered by a hint of a smile on her face, as if she’s happy to be living her destiny. 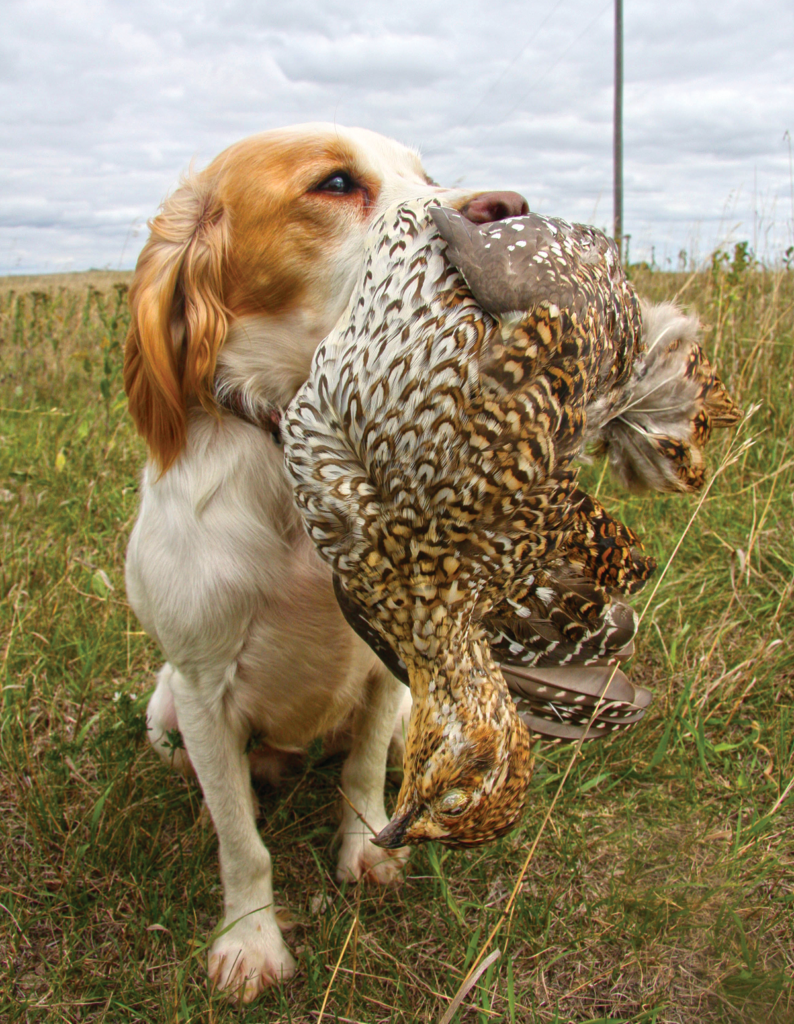 “She is all heart,” is how owner Anthony Hauck describes this pocket rocket. On the small side of a small breed, Sprig might think she has something to prove—so she does.

“I’m amazed by her energy, heart, and goofiness,” Hauck says. Sprig has a strong nose, but more important, she has an oversize attitude. “She’s wearing some blood at the end of every hunt,” says Hauck of his 20-pound cocker that many told him wouldn’t hold up through the 50 or so days he hunts every season.

“When I was young, I fancied myself an underdog, and in a way that’s what cockers are,” he says.

All In A Day’s Work // Sprig hunts nothing but wild birds all season, starting with sharpies and pheasants early on, then moving to ducks, grouse, and woodcock before finishing with late-season roosters.

“I’m a generalist,” Hauck says, and so is his dog. Working close in tight coverts, Sprig will extend her range on CRP ground, though seldom beyond the reach of a well-placed shot. She accompanies Hauck everywhere he goes, and the bond established by that close contact enables a sort of mental telepathy in the field. He’s never used an electric collar and has few verbal commands—they mainly communicate through body language.

“She’s a firecracker. Once she gets lit, she just goes,” Hauck says. “If she has a drawback, it’s that she doesn’t pace herself. She’ll go full-bore for four hours until she literally crashes.”

**Defining Moment // ** “I was hunting the North Dakota sharptail opener last season with my cousin. We saw a covey land on the other side of a hill and overtook it at the edge of a wetland,” says Hauck. When Sprig flushed the flock, the hunters knocked down four birds, as gun smoke and cattail fluff clouded the air.

“Sprig streaked for the one bird she saw fall, delivered it, then searched and found the other three without direction, battering through reeds and mud the whole time.”

**The Look // ** Quartering a field, this little spaniel has a wary, expectant look on her face. She retrieves pheasants almost as big as she is. Her white coat suggests a delicate appearance—until you focus on her face and witness a look of sheer determination.

Ace has been working birds for 15 years, retrieving more than 9,000 waterfowl in his storied career. During snow goose season, 100-bird days are typical, and on one occasion he logged 240 pickups before clocking out.

“He hunts like he read a book on the subject,” says owner Pat Pitt, who admits that much of Ace’s ability comes naturally. “I couldn’t have drawn up a blueprint for God to make a dog as good as him. The two of us always know what the other one is thinking. He’s the strongest, physically, I’ve ever had.”

All In A Day’s Work // According to Pitt, Ace’s combination of drive, speed, and common sense has become an expectation in the field. When the smoke clears, Pitt lets Ace do the thinking. “I let him pick his birds. He’ll run over dead birds to get to a cripple.”

As Ace has aged, Pitt has tried to throttle him back a bit and rest him, but “it almost breaks his heart,” Pitt says. “As long as he wants to go, I’m going to let him. He’s still got that look in his eye.”

Defining Moment // While Pitt was hunting over an Arkansas rice field, a flock of pintails buzzed the decoys. Pitt winged a drake while others dropped four more from the same flurry. As Ace retrieved the latter four, the wounded sprig flew another 300 yards. The wizened Lab battled sucking mud, standing water, and one outraged duck, delivering it 20 minutes later.

Personality // At home, Ace is a pussycat. “He’d sleep on broken glass and carpet tacks if you asked him to,” Pitt says. At the campfire, “he’s got his nose under your arm, wanting you to pet him.”

The Look // In the blind, Ace’s attention is not on the dead mallards lined up on the shelf, but on the next one that might fall from the sky. With a long, elegant head and white around the muzzle, Ace is the epitome of the lithe and nimble American-style Lab. 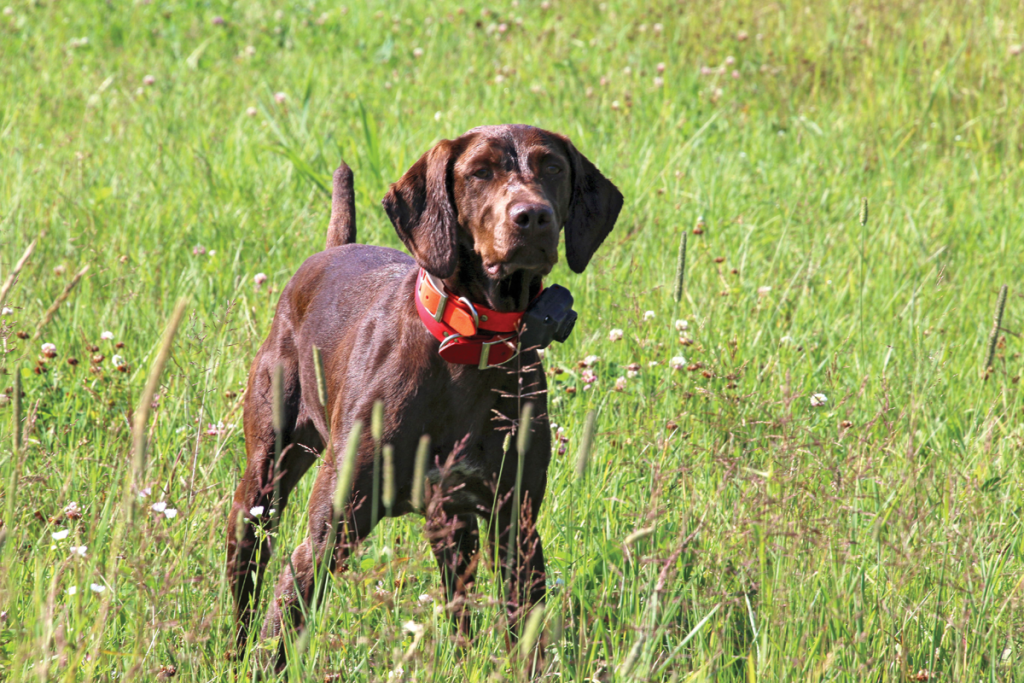 A big-running ruffed grouse dog, Luna will range 200 yards and stand birds until her hunters arrive via GPS. With her hind higher than her front, “she’s built like a thoroughbred,” owner John Zeman says. “She can reach and go almost effortlessly.”

All In A Day’s Work // When three generations of Zemans dropped sharptails from a covey, Luna was sent for the first bird and left to retrieve the others on her own, which she did flawlessly. “I’ve never had a shorthair with this much stamina, drive, and bird sense,” says Zeman.

Defining Moment // “I’ve witnessed her stand a ruffie at 600 yards as we located her on the GPS,” says St. Pierre. No matter how long it takes hunters to fight the shin-tangle, “she remains staunch on point.”

Personality // Luna possesses tremendous inner strength, as evidenced by her full recovery from two often fatal diseases. That she’s always checking back with her owner for direction demonstrates a willingness to please. Luna is relaxed in the house, but only because Zeman puts on the miles with her—in winter pulling a sled and in summer pulling a bike.

The look // When posed with birds, a world-weary countenance belies Luna’s inner joy. Locked in a graceful point in an alder thicket, her eyebrows are raised as if a mallard might just as likely flush from the cover as a ruffed grouse.