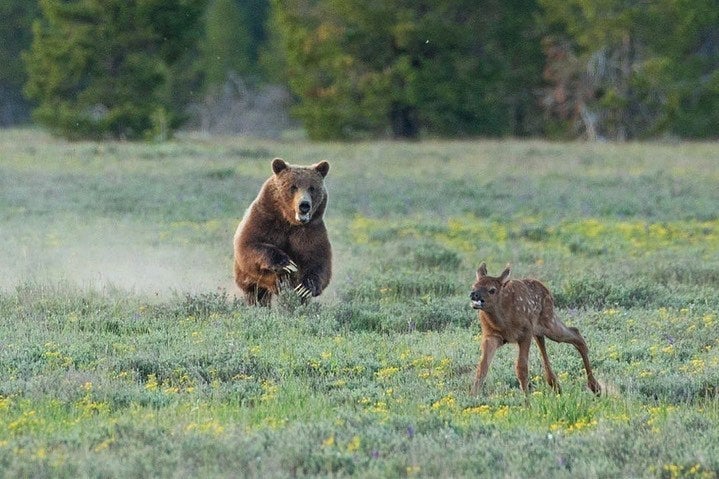 Grizzly 399 is perhaps the most famous female grizzly bears in the world, complete with her own Facebook and Twitter accounts. The bear is so well known that many people follow its movements, recording where it travels, and what it hunts.

Permission to publish the stunning photos was given by Sandoval to the Jackson Hole Conservation Alliance, which posted them to its Facebook page.

In the photos the giant sow grizzly is shown with her four cubs running across a rural road towards the camera.

Then the female, known as 399, spots a large elk calf and runs it down as it tries to escape across a mountain meadow. In the chase photos the claws of the bear are clearly visible as it closes in on the elk.

Finally, 399 catches and kills the calf, and the bear cubs swarm on the fresh meat to devour it.

In the Jackson Hole Facebook post, Sandoval commented, “For months bears in the ecosystem have been browsing on vegetation. However as prey species like elk, bison and deer begin dropping calves…bears have begun to switch over to more savory menu options.”

Another Facebook comment from JoAnne Westbrook, who reports she witnessed the bear-elk incident: “I will be forever shook and amazed at the power of the grizzly bear. Also, watching her let her cubs eat first and making sure they were okay was amazing. The mother elk crying for her baby was also tough.”

Grizzly 399 is adept at catching new-born elk. She was documented on YouTube killing and eating another calf with her four cubs in May.

Grizzly 399 lives in the vast Grand Teton National Park and the Bridger-Teton National Forest. She was born in a den in Pilgrim Creek, Wyoming, in the winter of 1996, and given her number by the Yellowstone Interagency Grizzly Bear Study Team.

She stands 7-feet tall, weights 400 pounds, and in short bursts is faster than a racehorse. She lives near humans, but has not had a deadly encounter with people. The more that 20-year-old sow has reared 16 cubs.