If You Live in Bear Country, Then You Already Know—Bears Must Fear Us

Grizzly and black bears are charismatic animals, but they are still predators. And when a brazen bear gets too close to humans, it can have disastrous consequences 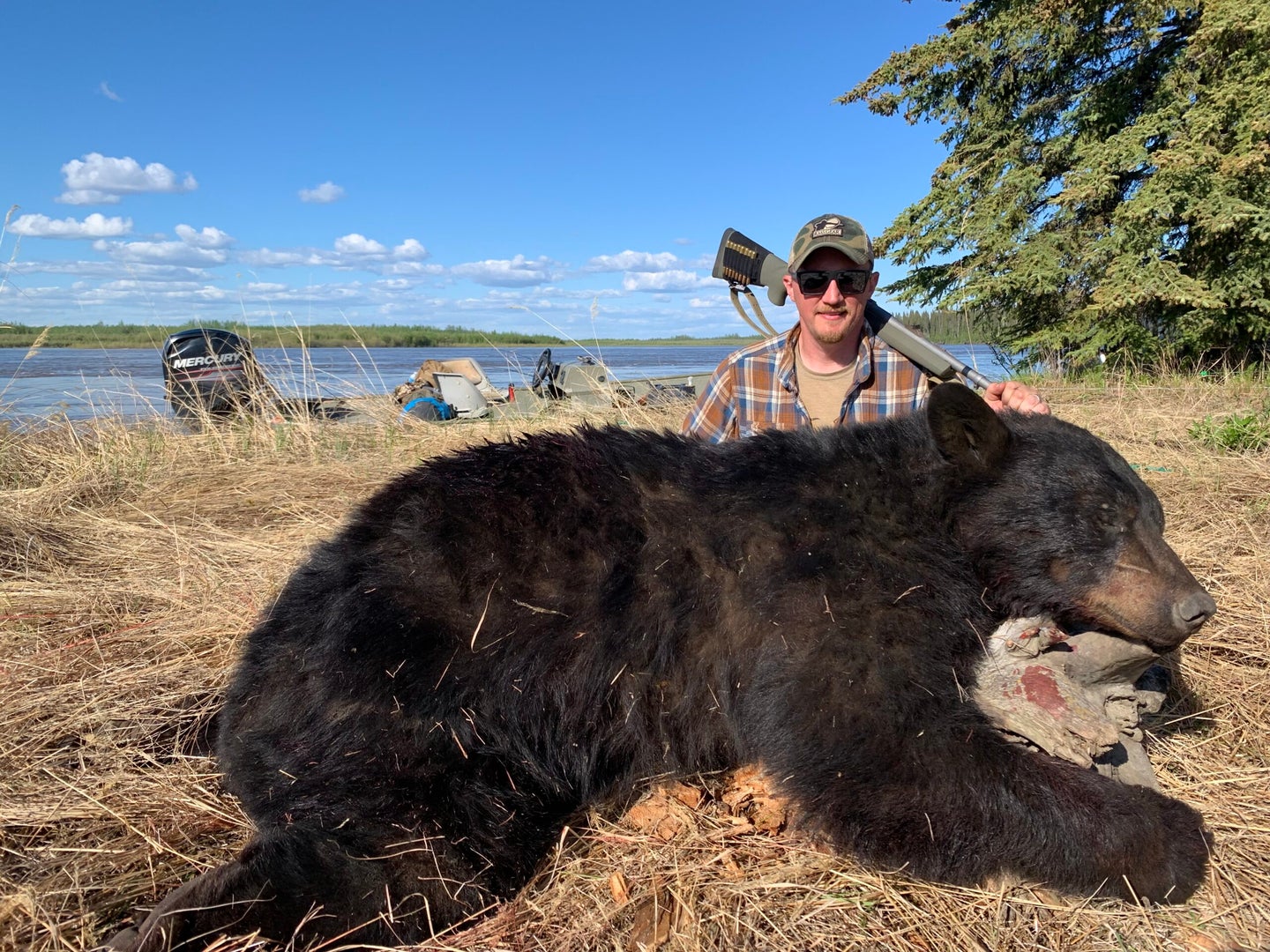 The author with the boar that became too bold. Tom Clum
SHARE

“Scram!” I sternly told the boar black bear, which took another step towards me.

I reached down and picked up a dead alder stick—about a foot-and-a-half long—and heaved it at the bear, which was standing about 12 yards away. The stick hit him across the front legs, but the bear didn’t move, he just looked at me over his scar-checked nose. I stomped and huffed in bear fashion—something that will usually intimidate a curious bear and cause it to run off. This one just kept coming closer, a couple steps at a time.

I was running out of options. This isn’t how I wanted to shoot this bear. I didn’t really want to shoot him at all.

A large spruce tree with a fallen log alongside lay between us, and the unfazed bear steadily moved closer. As he pulled himself up onto the log with both front paws, chest postured wide, I raised my rifle. This bear was not going to stop, he was calling my bluff. Only I wasn’t bluffing. He was getting close enough that I wouldn’t have time to react if he lunged at me.

We stood in a brief stalemate, neither of us willing to give ground. At this point, I knew how this story was going to end and held a steady bead on the bear’s chest—still hoping his resolve would crack.

He replied with a sharp huff, swatting the log with his paw. The concussion of my 300-grain .375 Ruger bullet hitting him in the chest sent the bear over backwards into a tangle of brush by the edge of the creek we were beside. I walked to the log the bear had been standing on—in three-and-a-half steps. The boar had come too damn close and was becoming aggressive. At that point, I had no other alternative but to shoot and hang him on the meat pole. That’s not an ideal scenario to fill a spring bear tag in Alaska, but when they become emboldened because they don’t fear you, there is no other alternative.

The bear’s lack of fear was instantly apparent when we arrived at the bait site, but I didn’t expect it to turn dangerous. My friend and archery coach Tom Clum had made the trip to Alaska for our remote black bear hunt. As we hauled in tree stands to the bait, Clum spotted the bear circling around behind us.

This bear had likely never seen a person, was exceptionally relaxed, and un-intimidated by our presence. He was a big-bodied boar, but the proportions of his head made him look young. I also noticed some rubbing of his fur, and we decided to wait for something a little bigger.

The bear laid on his belly next to the bait, watching us intently as we hung our stands. I’d never seen a bear quite so bold, but he wasn’t showing any signs of aggression. After sitting down, we watched the bear take a nap, pulling willow branches over himself like a blanket. Bears can be easy for people to anthropomorphize and watching his antics certainly softened our desire to shoot him a bit. Bears can be fun to watch, and they can act downright goofy, but they are still a predatory animal.

“He’s sure acting like he’s not worried about a bigger bear stopping by,” Clum noted. It was true. Often, a big or dominant boar will visit a bait site without a care in the world. But other bears will act cagey and on-edge if they think another bear might be approaching. It’s easy to get the impression that a bear like this is tame—and it’s a turnoff to just about any hunter, because it doesn’t take much skill to kill a boar such as this one.

Eventually the bear got back up and found his way down to my boat, parked about 40 yards behind and downhill of our tree stands. Great, I thought, as I heard his paws hit the aluminum bow. Through the freshly-popped alder leaves, I saw the boar reach down and come out of the boat with my Stihl MS261 chainsaw in his mouth—carrying it by the chain brake. He trotted up the hill and set the saw down, standing broadside over it.

“I should probably shoot this bear, he’s going to be trouble,” I told Clum. I didn’t though, and instead climbed down from the tree and ran the bear off before returning my faithful saw to the boat. The bear went back to eating and paid little attention as we climbed down and left for camp at the end of our sit.

Our Bear Is Back

There had been loads of afternoon activity on the bait site, and we thought that there were other bears using it, so we sat down in the hot afternoon sun to wait. It didn’t take long for the same bear to appear. “He’s a good bear except for the rubbing, but he’s also not going anywhere,” I said as we discussed whether or not Clum should shoot the bear with his recurve.

Within a few minutes, the bear made his way back down to the boat. “Here we go again,” I said. “I’ve gotta go do something about the boat.”

I climbed down and the bear ambled away, stopping at about 30 yards. I decided I’d set up an offshore anchor by tying the end of my bowline to an alder, placing my anchor precariously on the edge of the bow, and looping the slack of my bowline around it. If I pushed the boat off into the middle of the slow-moving creek, the line would pull the anchor off and keep it more out-of-reach.

The problem though, was that the bear decided he wanted in that boat, and he wasn’t going to let me get in his way. Eyes locked with mine, he steadily approached, a few steps at a time. I wasn’t going to turn my back to him to deal with the boat.

Despite my best efforts to deter him, he wouldn’t stop. The bear wasn’t stalking me or intent upon eating me. However, he wanted in my boat, and he wasn’t going to let me stop him. Based on my experience watching countless bears over the years—and the change in that bear’s manner—he was going to try and kick my ass if I didn’t concede. He was about a single lunge from making contact when I shot him.

Bears Will Be Bears

It’s not a big surprise that a dominant boar who has never seen a human might act like that. He had no learned reason to fear us, and we weren’t acting like the usual competitors he had to tangle with.

When you go into a remote area and set up a situation that will bring bears to you, you must be ready for anything. The situation didn’t work out like we hoped, but that can come with the territory. Ultimately, we were there to kill bears, and this one would eat just fine.

Bears will do what bears do, but the one thing that sticks in my mind from this experience is that in areas where they have a much higher likelihood of interacting with humans, bears need to fear people. With growing black bear populations and limited hunting of both grizzly and black bears in certain areas of the lower 48 states, it seems that negative bear encounters are on the rise in many places. Black bear hunting has become much more scrutinized in recent years–despite and increasing population nationwide, and tremendous conservation success stories in states like Missouri (which held its first black bear hunt in nearly a hundred years).

Despite recovered numbers, grizzlies still aren’t allowed to be hunted in the lower 48 states, and British Columbia lost its grizzly hunt. Anecdotally, many hunters describe Western grizzly bears as being fearless of humans—and why should they be? Elk hunters in parts of Wyoming and Montana talk about the necessity to break down and pack out elk quickly in certain areas because grizzlies will take them. They describe bold, fearless behavior from grizzly bears that sounds completely foreign and frightening to me—and I hunt in areas of Alaska that have abundant grizzly populations.

Without a firm pecking order established, and a pattern of negative experience with humans, bears don’t have any reason to fear people—and they figure that out quick. Amongst each other, bears fight regularly for a variety of reasons, but if a bear doesn’t fear you, they’re more likely to be bold. Encounters might be benign 99 percent of the time but get between a fearless bear and what they want, and you better be ready for trouble.

Bears Need to Be Hunted

Bear hunting continues to be a highly contested topic of debate. It’s not hard to see why. They’re charismatic animals. Sustainable bear hunting has been fervently attacked in several places like California and Washington state, and hunting the abundant black bear population in New Jersey is now banned.

Regulated hunting is not only good for a sustainable bear population, but it also gives bears a healthy fear of humans. Selective hunting of boars—even trophy hunting—has been shown to have no detrimental effect on populations, and even allows more cubs to survive. It’s common for mature boars to kill and eat cubs in order to bring the sow back into heat.

I’ve hunted bears for many years, and can tell you there is a dramatic difference in the boldness of bears in low-pressure or un-hunted areas versus areas with steady hunting pressure. Here in Alaska, areas with high bear populations and limited hunting near people have much higher rates of negative encounters than areas where there is steady hunting pressure. There are plenty of bears around the Fairbanks area, but negative bear encounters are relatively uncommon. The occasional problem bear in the area is typically dealt with quickly. With an even higher human and bear population, a few salmon streams, and much more-restricted hunting, the Anchorage area sees more bear attacks on an annual basis. Already this spring, a soldier on Joint Base Elmendorf-Richardson was killed recently by a sow brown bear. Almost every year, multiple people are attacked on local hiking and running trails.

When it’s sustainable, both grizzly and black bears need to be hunted. Even a seemingly docile and mild-mannered black bear is still a bear—unpredictable and perfectly capable of tearing you to pieces. Most bears aren’t out to get you—in fact it’s a rare occurrence. Amongst themselves, bears live a violent existence and most old bears—if they make it that long—have the scars to prove it. It’s fine for a bear to be a bear, but when they don’t fear you, they will almost certainly become problematic.