The Final Climb: A Steep Lesson in Elk Hunting

After a grueling climb, two hunters kill two bulls within minutes of each other 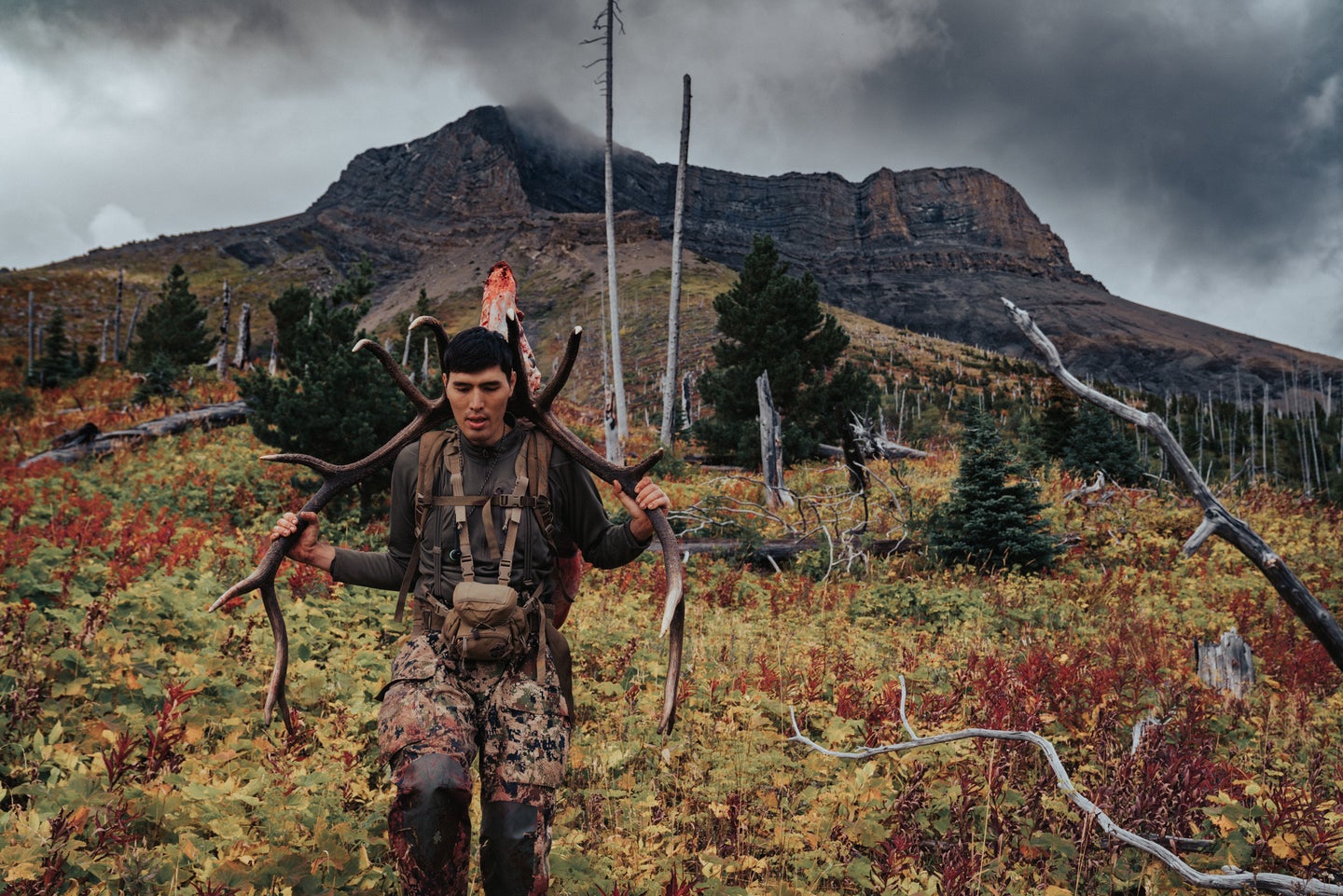 But I mostly dreaded the climb. I’m a 6-foot, 6-inch tall deer hunter from Virginia who hates hiking. The only climbing I typically do in the fall is 20 feet into a treestand, and I had just a month to get ready for this hunt. Here in the mountains of British Columbia, I was far beyond my comfort zone. But part of me also relished the hard hike ahead. This was my first elk hunt, and a guided one at that. While I was still a novice elk hunter, I did know at least this much: a first bull should be earned.

Five days earlier, I met Mike Painter, Barnes senior product manager, and photographers Seth Schuster and Josh Ishmael at the airport in Grand Prairie, Alberta. We were headed for a ten day elk, bear, and mountain goat hunt in B.C., with Compass Mountain Outfitters. The adventure was all part of a photo and video shoot for Barnes Bullets. Most photo shoots rely on staged scenes and scripted movements, but our plan was to hunt hard, and take photos along the way.

If, like me, you haven’t spent time hunting elk in the backcountry, there are a few things to first understand. The hikes don’t happen on flat ground where you can simply put one foot in front of the other. In the Rockies, your hikes are more like uphill obstacle courses that strain your stabilizer muscles and slowly suck the energy from your body.

The first day was a grueling (albeit short) 1.5 mile hike up a 60 degree slope, covered in deadfall. Hiking through deadfall involves taking a step, climbing over a tree, taking a step, and climbing over another tree. It was grueling and served another good lesson: hikes in elk country should be measured by effort, not by distance.

When we finally made it to the top of that ridge we located a bull, but it just wouldn’t leave its cows and the safety of the dense timber. That first day set the stage for the next four—lots of smart herd bulls and 42 total miles in steep, rough terrain.

On day five we took the afternoon to scout for goats, and while glassing our guide Cassidy Caron spotted two bulls 3.5 miles away. If you could draw up a protected area where bulls could escape public land pressure, this was it. They were on a steep mountain with no trails, no road access, and surrounded by thick woods and deadfall. But there was a creek bed with tall walls on either side we could use to quietly get to the elk’s elevation. So that’s what we did.

I had been tested mentally and physically over five days of miles and climbs. But, it was about midway up this mountain that I first felt doubt creep in. We just had two days of rain and everything in the creek bed was ice slick. It was painfully slow going as every step needed my full attention so I wouldn’t tumble over logs, rocks, or down the creek walls. The trek started off frustrating and by the third fall, when I landed in the creek and my boot filled with ice cold water, I was infuriated. The slow, slippery hike was one aspect, but it was also a steep climb up a mountain. And we still had a long way to go.

To stay positive, I started to think about things I was grateful for: My wife, a job doing what I love, and the mere fact that I can walk. I was born with a condition called spina bifida, which is a birth defect that causes the spinal cord to not form properly. As a young child, the main symptom I had was paralysis of my legs. Through a surgery with very low success rates, I was able to regain function of my legs and live a mostly normal life. As a kid I would go to a specialist at Yale New Haven to make sure my condition hadn’t regressed and to discuss lingering symptoms. I remember feeling guilty getting treatment for small issues like nerve pain when there were kids in the waiting room in wheelchairs.

I felt a familiar guilt now. There are many hunters who grind it out on public land every season and don’t get the opportunity I had before me. I knew I must make the most of it. And just like that, everything changed for me. I was going to make it to the top—no matter what it took.

The creek bed narrowed as we got higher. Walking on rocks and over logs turned into climbing on vertical shale and gravel walls. The shale was slick but manageable. The gravel had an outer layer that was unstable. Several times it gave out and sent me back into the creek. Yet one step at a time, we made our way up. That’s when Caron spotted two grizzly bears not far from where the elk were. We’d have to be extra vigilant now.

The elk were not far from where we stood, but we were at the bottom of the creek bed surrounded by 70 feet of vertical, muddy shale walls. Up we went. Soon enough the shale gave out under my foot and I slid 10 feet back to the bottom. Exhausted, I climbed back up. At the halfway point, Painter, who was ahead of me, started to slide. He used his trekking poles to arrest his fall, but couldn’t regain traction. Here we were, not 100 yards from two legal bulls and this final climb stood in our way. It was the elk hunting version of the Sisyphus, from Greek mythology, spending eternity rolling a massive boulder up a hill only to have it roll back down, again and again, just before he reached the peak.

Caron, who already made it to the top, heard the commotion below, and climbed down to help Painter from his sprawled out position. She lowered a trekking pole for him to grab. He was able to make it to a grassy portion that had much better traction where he could gather himself and continue the ascent.

Then it was my turn to cross the wall. I also began to slide, but Caron and Painter lowered their trekking poles so I could pull myself up onto the grassy area. Only halfway there.

At the top of the wall there was about a 6-foot section between two grassy patches. If I could make it across those two steps I would be at the top and ready to start the final approach. I dug in my first step and brought my left foot over. As I put weight on that foot the rock gave way. The top of the wall slipped farther away, and at that moment, I thought that I wouldn’t be able to reach the top. I feared that I’d come this far and a 6-foot section of shale would prevent me from killing an elk. But down came the trekking poles. I grabbed onto them, dug my feet in, and pulled myself up to the top of the wall.

Just then we heard a bugle rip through the morning air. We hustled to clean optics, and load rifles. Heading toward the bugle, Caron led, followed by me, Painter, and Schuster. We made our way around a hill and stood at the base of another hill that was just 20 yards ahead of us. Caron gently squeezed her Hoochie Mama cow call.

And then the most majestic scene an elk hunter could ever imagine unfolded before us. We saw antler tips. Followed by wide beams cresting the hill. Then ivory-tipped fronts. His head came up over the hill, only 20 yards away. The bull stood over us looking for the hot cow he heard.

“Shoot him,” Caron said, letting me know he was a legal bull. My safety clicked as I leveled my rifle, the elk completely filled my scope, which was already turned down to three power. As soon as the center dot settled on his chest the .300 Win. Mag. Tikka barked and a 180-grain Barnes Vor-Tx sent the bull hurling down the hill. I racked another round and shot him once more on the run before he disappeared below the hillside.

Just after my shot, Painter and Schuster ran up the hill in pursuit of the second legal bull. They heard him moving through a small patch of pine trees, and soon Caron followed after them. They saw movement, but it was a five point—not legal. Then the large, light-bodied six point emerged through the trees. At 75 yards Painter fired an off-hand shot from his .300 PRC Fierce Edge and his 208-grain Barnes LRX hit the shoulder square, dropping the elk.

Read Next: Your First Elk Hunt: What Rifle Should You Bring?

We had just shot two 6×6 bulls within minutes of each other after five tough hunting days. The following moments were filled with smiles, hugs, and all the emotions that come with success. What’s more incredible is that the day earlier Caron predicted we would have both elk killed by 9:30 and when we checked the time it was 9:30 a.m.

But we still had the packout from hell ahead of us, with two giant-bodied bulls down and two grizzly bears within eyesight. There was the option to carry a manageable load of meat and come back for the rest. But, that would mean climbing back up the mountain and risking those grizzlies claiming the elk. So we decided to pack out both bulls in one painful trip.

Luckily we didn’t have to go the full 2.5 miles to the bottom. Chad Carmichael and cameraman, Josh Ishmael, stayed at the bottom of the mountain during our stalk where they watched the elk through spotting scopes. They were able to find an ATV trail that cut out a good chunk of the pack out.

One thousand yards isn’t that far. You can walk that distance at a leisurely pace in 15 minutes. But with a pack loaded to the brim and elk antlers on your shoulders it takes longer. Then add in a slippery slope littered with deadfall. Toss in 500 yards of the thickest, nastiest willow and pine you can imagine, and a simple walk out becomes a hellacious test of will. And yet, none of that mattered now. I simply took one painful step and then another, and another. When I fell, I got up, trudged on, and then fell again. The concept of quitting had lifted like the morning fog. I continued on because I must, because that’s what elk hunters do.