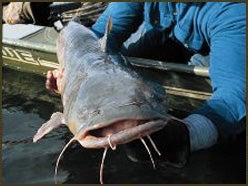 21. Suspend the Bait
Small streams often bristle with small- to medium catfish. Here, a bobber/drift presentation works well. Position a bobber so the bait hangs just above, but not on, the stream’s bottom. Add enough weight to hold the bait down, then allow the rig to drift naturally as you guide it along potential catfish hideouts. If possible, use natural baits taken from the stream you’re fishing.

22. Cast No Shadows
Catfish spook when a shadow crosses the water. Keep the sun in your face or at your side to avoid casting a shadow on the water you’re fishing.

23. Set the Table
If it’s legal in your state to use chum to attract and concentrate catfish, give it a try. Pour a gallon of wheat and/or milo into a 5-gallon bucket and cover the grain with water. Place the uncovered mix in a sunny location outdoors, and allow several days for it to sour. The worse the mixture smells, the better catfish will like it.

Use a plastic scoop to scatter the chum around areas you intend to fish. Don’t overdo it; you want catfish to pick up the feed kernel by kernel so they don’t get full. Lower a bait, such as a minnow or night crawler, to the bottom and you’ll soon hook a catfish attracted by the chum.

24. Double Dip
The double-hook tightline rig is excellent for suspended channel cats. Begin with a 1-ounce bank sinker at your line’s end. Tie a loop knot 18 inches above it, and another 18 inches above that. Tie 3/0 hooks on 2-foot leaders, then tie the leaders to the loops and bait each hook.

Bounce the sinker on bottom as you drift. You’ll soon learn the “feel” of the sinker striking cover such as a rock or log. When the rig bumps something, hold it there momentarily. If a catfish is waiting in ambush, your bait won’t last long. Set the hook at the first sensation of a pull on the line.

25. Work Wonders With Worms
Worms can entice big flatheads almost as well as live-fish baits do. For the most attractive rig, run an 8/0 Kahle hook through one end of a worm, then run it back through the worm’s collar, leaving the end of the worm hanging. Continue loading worms until you fill up the hook. You want as many loose ends as possible and enough worms to create a tennis-ball-sized wad.

Small fish, such as sunfish or suckers, will nibble the worms when they’re fished on the bottom. A big cat nearby will watch the little fish and will eventually approach in an attempt to either devour a smaller fish or steal what it’s eating. When you notice the nibbling is over, prepare for a strike: The small fish are fleeing and the lunker catfish is on his way.

**26. Make a Sandwich for Catfish **
Big blue cats love sandwiches. Make one by sandwiching the innards of a big herring or shad between two fillets from the same baitfish. Thread the sandwich on a 5/0 wide-gap circle hook tied on a drop leader above a 2-ounce bank sinker. Bottom-bounce the rig while drifting and hold tight.

27. Fish the Morning Shift
Don’t disregard dawn; it’s one of the best times to fish. On many waters, catfish activity peaks just as the sun rises. Cast at daybreak, and your catch rate might soar.

** 29. Keep Bait Close on a Dark Night**
On moonless nights, catfish hunt the shallows. Cast your bait near shore, not toward deeper water. On moonlit nights, start deep and work progressively into shallower water until you find fish. Tighten your line, keeping a finger on it to detect bites. Set the hook hard when you get a taker.

30. Hit the Bull’s-eye
Rock wing dikes in rivers often attract catfish. When you’re fishing these structures watch for little whirlpools forming and moving across the water at each dike’s end. Time your cast so your baited rig drops in the “eye” of a whirlpool. Do this and the bait will fall directly to the bottom and hold, rather than being swept downstream in the current. Your chances of hooking a nice cat increase substantially.