Frozen Giants: How to Icefish for Catfish

Yes, you can catch one of summer's most popular species in the dead of winter 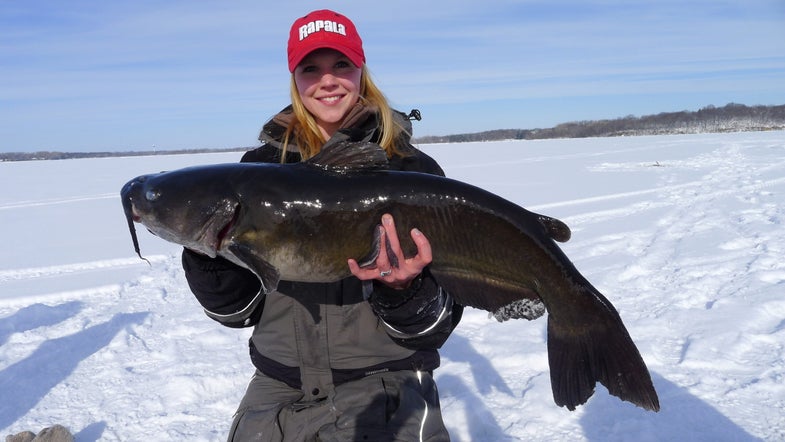 A big cat, caught through the ice. Steve Ryan
SHARE

Chasing trophy catfish can be one of the most rewarding pursuits in all of ice fishing. These fish grow big—often topping 10 to 20 pounds. They fight hard, too, tougher than any bass, walleye or panfish that you will encounter this winter. Plus, they largely go under-utilized throughout the ice season.

The key to success is identifying prime holding and feeding areas for winter channel catfish. Concentrate on main basin areas that offer stable water conditions throughout the winter but which also have access to feeding flats or creek mouths that dump added food and oxygen into the water as winter progresses.

Traveling in packs, catfish slowly cruise deep-water areas and move up onto feeding flats periodically throughout the day. So as not to spook these roaming fish, it is best to drill ample holes at the beginning of the day to cover deep water areas, plus areas where a creek arm or point intersects the basin and offers a transition onto a feeding flat.

Based upon local regulations, multiple setlines in the form of tip-ups and Automatic Fishermen can be used to spread lines out from deep to shallow water. These devices allow various bait presentations to be placed at multiple depths and help to signal the location and movement of fish throughout the day.

The use of a good sonar unit or underwater camera will aid in determining the cruising and feeding depth of channel catfish. The most typical depth range is within 6”-4’ of the bottom. However, vary the depths of baits as not all catfish in the system are doing the same thing.

Even though a trophy channel has a mouth large enough to swallow a grapefruit, keep baits small. Three-inch shiner minnows or fatheads are the perfect size to get the job done on winter cats. Other options include wax worms, red worms, chubs, sucker minnows or shad where availability.

Since catfish are primarily scent feeders, have at least two bait options available for them to choose from at all times and switch out old baits for fresh ones every 30-45 minutes.

Unlike summer fishing where stink bait or large soured baits are productive for trophy channel catfish, think small and fresh for winter catfish. Until late ice when a large amount of dead bait begins to enter fisheries, winter catfish are primarily feeding on live bait in the form of small panfish, minnows and emerging larva.

As such, bait hooks with a mix of live and freshly cut minnows. An added trick is to combine both of these offerings on a size #6 treble hook suspended under a tip-up or Automatic Fisherman. With three hooks to the treble, cut one minnow in half. Add the head section to one hook; the tail section to the second hook and a lively minnow to the third hook. This combination offers scent from the cut bait and movement and flash from the live minnow.

Much as during the open water season, winter channel catfish will school together with fish of similar size. If you are encountering nothing but small fish, change locations – focusing on deeper water for bigger fish. Be mindful that larger fisheries are more likely to produce numbers of trophy catfish than smaller fisheries.

Channel catfish are spirited fighters through the ice. They like living life near the bottom of the lake and seek to impose their will upon anyone who wants to budge them off the bottom. For this reason, a medium to medium-heavy power rod is in order.

Use a minimum of 6-pound test main line and 10-pound test leader to withstand the added abrasion on the line as catfish twist, turn and roll under the hole. Even with slightly stouter gear, expect protracted battles and rod blanks bent deep into the handle section as cats do their best to avoid capture.

Landing big catfish—even through a large 10-inch hole—can be a chore. One person coaxes the fish into the hole and the other grabs it behind the pectoral fins to corral it out of the hole.

Trophy catfish are a tremendous resource. These fish congregate during the winter months and are susceptible to over-harvest. For this reason, enjoy the tremendous battle these fish provide and release them to do battle another day.