Clonking Cats: How to Call In Catfish

Catfish are scent-targeting scavengers of the highest order. But did you know that they can also be called to the hook? 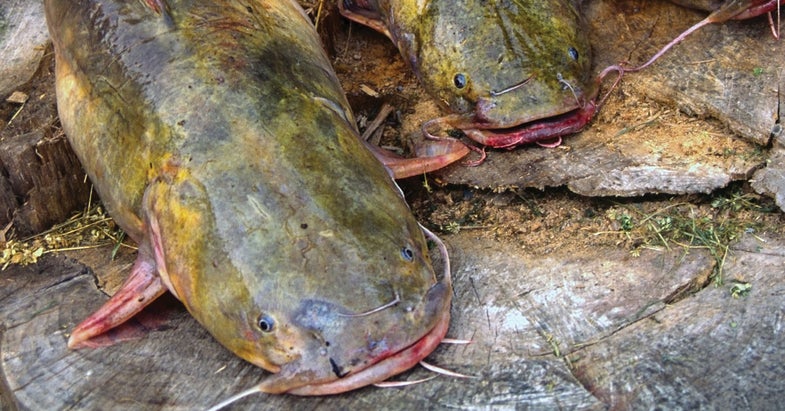 Flatheads feed well in brackish water by using their vision, sense of smell, and hearing to locate prey. Photograph by Keith Sutton

Catfish are often as misunderstood as the anglers who seek them. Although believed by many to be simpletons—bottom-dwelling scavengers that spend their time slowly sniffing around the dark and murky depths looking for their next stinky meal—cats are actually very sophisticated creatures able to detect sounds, vibrations, and smells far better than many other species of fish.

Whereas most fish have an inner ear independent of their swim bladder, the otolith of the catfish is connected to its swim bladder via a series of small bones. Sound waves traveling through the water create vibrations, which transmit to the otolith in the fish’s inner ear. These vibrations are then communicated to the catfish’s brain, giving it a heightened ability to detect high frequencies.

This super-charged sense gives catfish a superior ability to detect the sound and vibration emitted by forage fish species. That’s something that many U.S. catfish anglers have failed to take advantage of—until now.

Enter the Clonk
Anglers have been using various sound-producing techniques to attract freshwater fish for years. A favorite among striped bass anglers, for example, is to rapidly beat a fishing rod on the water’s surface to mimic the sound and sight of a topwater feeding frenzy. These same anglers have also been known to beat a rubber mallet on the boat deck to draw in fish. It might seem odd, but it works. I’ve witnessed the results firsthand.

Catfish respond to sound as well. European catfish anglers have sworn by the effectiveness of using sound to catch cats for decades. And there’s a growing group of catfish anglers all over the United States who are starting to as well; they have begun to introduce sound to their catfish rigs using floats and noise-­making catfish lures. Think of them as Rat-L-Traps for cats.

Catfish clonkers are widely available on the web for about $30. Photograph by Cliff Gardiner & John Keller

Another method is a sound-producing technique called clonking or catfish calling.

European catfish anglers are accomplished clonkers. Many of the wels catfish we’ve all seen on the internet were caught by clonkers. As stateside anglers become more willing to try new techniques, these devices are finding their way onto our lakes, reservoirs, and rivers.

The clonk consists of three parts: the handle, the fork, and the heel. Traditionally, clonks have been made of wood, but cheaper plastic versions are common these days, as they’re easier to produce.

Using a clonk is as easy as beating eggs. Hold the device just above the surface, and splash water with the heel of the clonk. This creates an air bubble. The fork of the clonk cuts the bubble and produces a sound that is similar to that of removing a cork from a wine bottle. The process is repeated numerous times in a row quickly. Learning the technique and producing the right sound requires some patience. The secret sauce is practicing with the device to produce precisely the right sound, which seems to stimulate the defensive instincts in nearby catfish.

Jackie Kennedy, an East Texas–based fishing guide, has used a clonk extensively while fishing for flatheads.

“Some nights it works real well,” says Kennedy. “Like most other things, though, it’s no magic bullet, and if you’re not on fish, don’t expect to call them in from great distances. But I choose to believe it works.”