A cult of Northwest sharpies takes two-handed flyfishing to its highest level using the Skagit system. 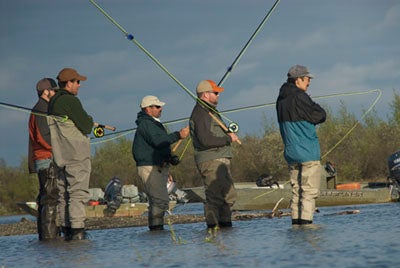 In the early 2000s, I was engaged to an Oregon girl whose father, Frank, was a rabid Northwest flyfisher. What I remember most about Frank was his distaste for two-hand spey rods, which were becoming the rod of choice on his beloved Deschutes River. “Why would you cast one of those meat sticks when most steelhead are caught near the banks?” he asked. “If you hooked a fish on one of those rods, you wouldn’t even feel the fight!”

Soon, I was heavily researching spey options, visiting with a flyfishing cult that spent its time either fishing Washington’s Skagit and Sauk rivers or cutting apart and then splicing together various sections and weights of fly lines, attempting to build the ideal Northwest spey system. Some of those people–including Dec Hogan, Ed Ward, Scott O’Donnel, Mike McCune, Scott Howell and Mike Kinney–lived in rented garages. Others were tenting it along the banks of famous rivers. Some set up camp in Oregon and opened outfitting businesses.

Together, these guys–the Aces of Spey, as I call them–developed today’s Skagit spey line casting system, which utilizes a non-traditional short-belly line, heavy heads and a variety of short-stroke, rocket-launching casts with crazy names, such as the snap-tee, the Perry-poke and the Wombat. Today, if you’re fishing a steelhead stream and aren’t throwing the Skagit way…well, let’s just say that single-hand rods and 60-foot casts are passe.

Flight Control
There’s good reason for the Skagit spey system’s appeal. According to Andrew Bennett–who owns Deneki Outdoors, which has lodges on British Columbia’s Dean River and Alaska’s Kanektok River–the Skagit system makes life easier because clients pick up spey casting in a couple of hours, whereas previously it might have taken them a couple of weeks.

“Without a doubt, for the average angler, the Skagit system is much more forgiving than other types of spey fishing, such as the Scandinavian casting style,” Bennett says. “That style of line and cast uses a long-belly line, and your timing has to be perfect. With the shorter-belly Skagit lines, you don’t have to be perfect. Basically, the Skagit movement took spey from being the domain of the advanced angler and opened up new possibilities for people who are able to fish only a couple of times a year.”

Trying to gain success quickly with a single-hand rod, a light sink-tip line and a bead-head nymph is like packing your Daisy air rifle for a Cape buffalo hunt in Africa, expecting to take one of those brutes down with a shot to the iris.

The Way of the Spey
Spey rods measure 12 to 15 feet, compared to a relatively standard 9-foot fly rod. This additional length allows flyfishers to reach fish previously available only to conventional gear guys. In addition, advances in sinking lines and the Skagit shooting-head system offer access to deep-holding fish that won’t rise to a fly. They also mend line efficiently, which allows anglers to better control the speed and depth at which a fly drifts.

The Skagit system, popularized by steelheaders in the Skagit River area, is characterized by specialized shooting-head fly lines and the sustained anchor concept of casting.

Ten years after its inception, the Skagit system is a favored method for catching steelhead and salmon in the Pacific Northwest, and is gaining momentum in other regions as well, from the sea-run brown trout fisheries of southern Chile to the Atlantic salmon streams of Quebec and Russia’s distant Kola Peninsula.