Some call it fishing, we call it combat 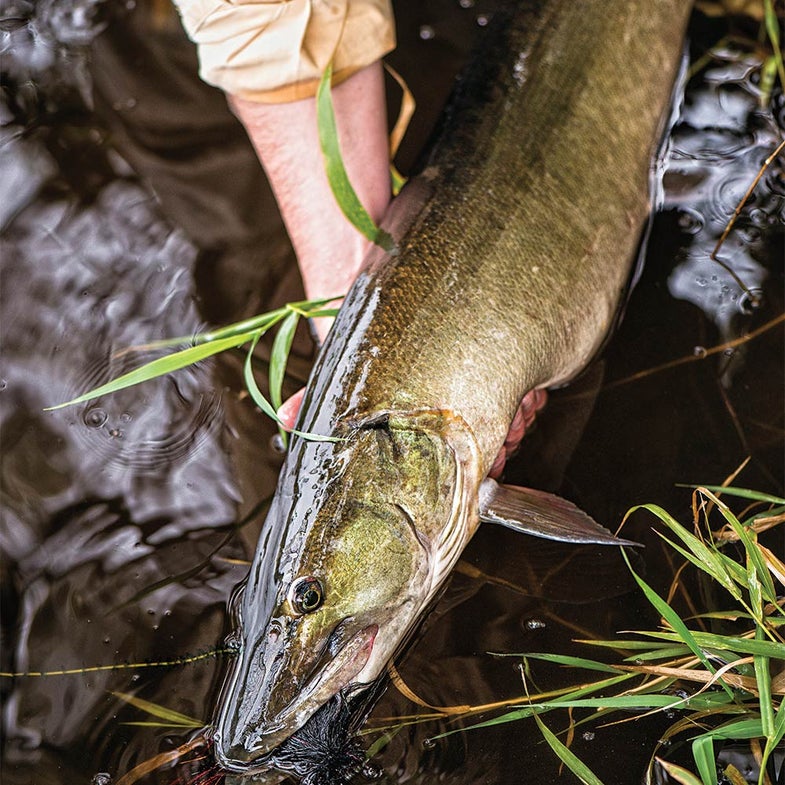 When people ask me what flyfishing for muskies is all about, I tell them it’s like saddling up a grizzly for a hot minute, or wrestling an alligator in a telephone booth—except you get to live. Once fall rolls around, there’s nothing I’d rather be doing than dragging giant flies past the faces of monster fish. But flyfishing for muskies isn’t only about fun. There are times when flies will simply outperform conventional lures. Just ask my brother, Jeff.

It was late October, but the northern Wisconsin weather felt more like mid-winter. Frozen water bottles rolled around the bottom of the boat, and we had to windmill our arms every dozen casts to keep blood flowing to our digits. Jeff was catching a few pike but zero muskies on his bucktail, while I was moving a few muskies on my flies and generally getting one of them to eat. It was clear that fish were keying onto large, slow, neutrally buoyant offerings—precisely the definition of a muskie fly. After watching me boat two mid-40-pound fish, my brother finally asked if he could try a fly. I rummaged through my selection until I found a black-and-purple behemoth I call Large Marge, the biggest muskie fly I’ve ever tied. To make it castable with his baitcaster, we crimped eight large split shot about a foot above the eyelet. Twenty minutes later, he fired it into the mouth of a feeder creek, where a Subaru-sized piece of water heaved just under his fly. He didn’t catch that fish—just a case of shaky knees—but it made me wonder what would have happened if he’d been throwing flies the whole time.

To get in on this muskie game, you’re going to need a dedicated big-fish rod in the 11- to 12-weight class. Stay away from ultra-fast rod actions. Slightly slower rods—medium to medium-fast—offer a bit of forgiveness while you get your timing down. A rod I highly recommend for beginners is the Redington Predator. It was designed with a slightly softer butt section to make casting over the course of a long day easier—and when you’re muskie fishing, you want all the help you can get. Whatever rod you end up going with, make sure you practice with it in the weeks leading up to a muskie trip. You can always tell which guy hasn’t been getting his reps in: He’s the one sitting down in the boat, totally wiped out, with half a day of fishing still to go.

Reels are the least important part of the muskie setup—you need one capable of storing your line and balancing your rod, but that’s about it. Don’t ever deliberately fight a muskie on the reel unless he forces you to. I once watched in horror as a guy cleanly buttoned his first muskie ever, then, instead of immediately putting the screws to the fish, spent 10 seconds reeling in his slack line. He was a steelhead angler who’d been trained to do that, not knowing that in muskie fishing, constant, brutal tension is the only sure way to keep a fish hooked. Sure enough, his fish threw the hook in spectacular fashion boatside, breaking all our hearts. Muskies are tug-of-war adversaries—fight them with all the strength you’ve got in both your arms, and reels be damned.

For line, don’t even think about a floater. Sinking lines are necessary because muskie flies are totally unweighted—if you were to build enough weight into a 12-inch fly to sink it, you wouldn’t be able to cast it. I recommend RIO’s InTouch OutBound Short WF/10 with either a slow (I/S3) or fast (I/S6) sink rate, depending on how deep you want to fish. It’s an easy-casting line with no stretch, which will come in handy on hooksets, and at 425 grains, it pairs perfectly with the 11-weight Predator. Attach 2 feet of straight 60-pound mono and 1 foot of wire leader to the end of your line, and you’re ready to choose a fly.

While bass and pike flies come in a variety of materials, when it comes to muskie flies, the range of feasible materials is narrower. Tie a muskie fly with rabbit strips and you’d have something impossible to launch and painful to retrieve. For that reason, use bucktail. It doesn’t absorb much water, and the stiff fibers make for a great profile in the water. Fish these flies with long, slow strips and plenty of pauses—these aren’t trout streamers that you need to rip back to the boat.

Read Next: Why I Do Muskie Camp in Northern Wisconsin, and How to Start Your Own

Probably the hardest skill for a new muskie fly angler to learn is the hookset. A 9-foot fly rod is just too flimsy to drive a big hook home into a bony mouth, so you have to deploy what’s called a strip-set. While keeping the rod pointed at the fish, use your line hand to make one or two very hard, very fast pulls—like you’re trying to start a lawnmower. One secret to a good strip-set? Don’t rush it. You’re more likely to fumble your line.

Need more depth than your fly and fly line is giving you? Put that 9-foot rod to work by jamming the tip a few feet below the surface. Got a curious fish that isn’t committing to a slow presentation? Try a high-speed retrieve by tucking the butt of the rod under your armpit and stripping as fast as you can with both hands. And don’t forget to figure eight—you never know when a shovel-headed beast is tracking your fly just out of view. It’s this willingness to eat boatside that makes the muskie such a great fish.

Make no mistake: Catching a muskie on a fly rod isn’t the easiest thing to do. But the thrill of being tethered to one is well worth the pain—and then some.