Why You Should Try Tenkara Fishing for Trout 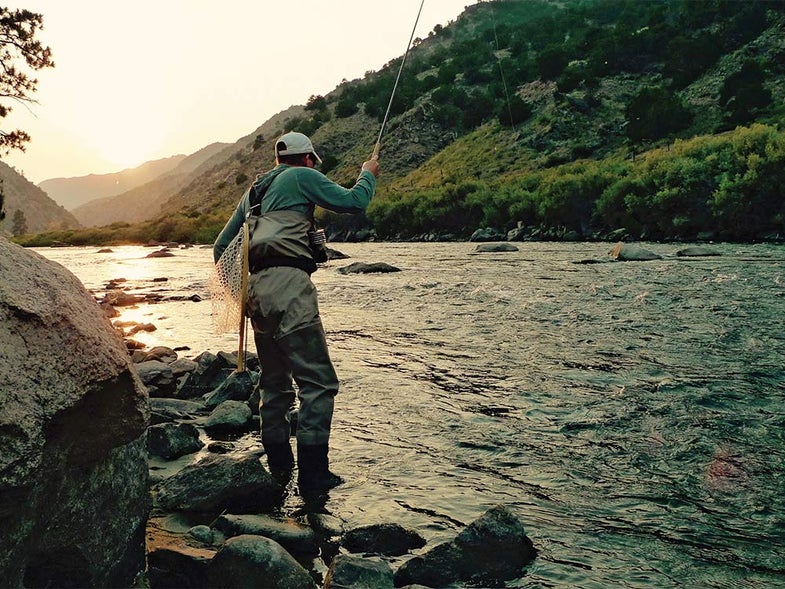 It’s just you, a fly, and the fish. There is nothing to get in the way of telling The Great Lie in the most transparent way possible. The lie, of course, being that the fly is not real. “The essence of deceit is found in the bite.” This is how Paul Vertrees answers the question of why he adopted the Japanese tenkara approach to flyfishing.

“Tenkara allows you to rid yourself of everything that is not essential to catching a fish. You have no gear in the way and are unencumbered by gadgets. When you declutter your effort, only you and the fish remain.”

In case tenkara is foreign to you, the system is simple: a long rod (between 10 to 14 feet), line attached to the tip of the rod, and a fly attached to the line. That’s it. No reel. No line guides. No tackle box full of gear. You can carry everything for a day’s fishing in your back pocket (including the rod, which telescopes down to about 20 inches).

In 2012, Vertrees, a 54-year-old Canon City, Colorado, native, became one of only a handful of certified professional tenkara guides in his home state, and he now helps Zen Tenkara design products for the technique. “When I first started using this style of flyfishing, I found that not only was it effective, but it made me a better angler. Instead of having a casting range of 60 feet with standard flyfishing equipment, I now had a range of 20 feet. So stealth, reading water, and precise placement of a fly became extremely important.”

The system is uncomplicated, but its mastery requires a focused understanding of the environment, as well as intricate alterations to the typical fly-casting motions.

“The cast you use most often is like a roll cast, but with a shorter, faster stroke. But the types of casts that can work are only limited by your imagination. I use an almost vertical cast when vegetation is directly behind me, popping the tip of the rod straight up in the air and then flicking the line forward. You can also use a bow-and-arrow cast, where you grab the shank of the hook on your fly, pulling a bend in the rod to shoot the fly forward. It’s amazing how much control you can have over your fly with these long rods,” Vertrees explains.

For elite tenkara anglers, control is not only achieved through the cast, but also in how the fly is presented once it hits the water. Because the rod is extremely long, you can lift the majority of the line out of the water and achieve a drag-free drift on every single cast. This takes practice and concentration. “Focus,” says Vertrees. “Try to feel the river through the short connection you have to the fly. Develop a relationship with the current, and then you will be able to steer your fly into fish-holding areas and keep it in the strike zone for extended periods of time.”

With only a 20- to 25-foot range, spooking fish is a real problem. The easiest way to avoid the issue is to always focus on fish that are upstream, which is the way trout typically face while feeding. But it’s about more than being seen. Vertrees also implores anglers to be quiet, stepping slowly, focusing on boulders instead of gravel, and avoiding any potential collision of body and structure. “Once you concentrate on being quiet, and then you fish with someone who doesn’t worry about making noise, you’ll be amazed at how incredibly loud that person is. And if that angler is loud to you, imagine how the fish must feel.”

Read Next: How to Catch Bruiser Brown Trout

Although it may take time to fully grasp, the fruits of tenkara labor are sweet. “Let me put it to you this way,” Vertrees says. “I can’t count the number of 50-fish days I’ve had with a tenkara rod in my hand, and that’s not counting the fish I missed. I recently returned from a solo backpack trip where the day flashed by like it was an hour. I believe I was fighting fish more often than I was casting. Simplicity allows for focus, and focus allows for success.”

Although the technique’s effectiveness is the main driver for Vertrees, using such a simple presentation has made the process almost spiritual to him. It seems appropriate that tenkara, when translated to English, means “from heaven.”

“The Japanese take great pride in the elegance of simplicity, and there is a reason for that. The fewer things you have between you and what you pursue, or love, or desire, the more intimate the experience. In fishing, it’s hard to get simpler than tenkara. So, by using the technique, it likely is impossible to be more intimately connected to the fish you seek and the places they live.”

If you want to give tenkara a go, no need to do a bunch of shopping. Simply get the Grab-n-Go Pack from Zen Tenkara. It includes a Zako rod, a foam line holder preloaded with line (including tippet), and a kebari fly for $230. Another good starter kit can be found at Tenkara USA.