Fishing is inexorably connected**** to moments in time. Anglers are expert at living in the moment—both mind and body completely... 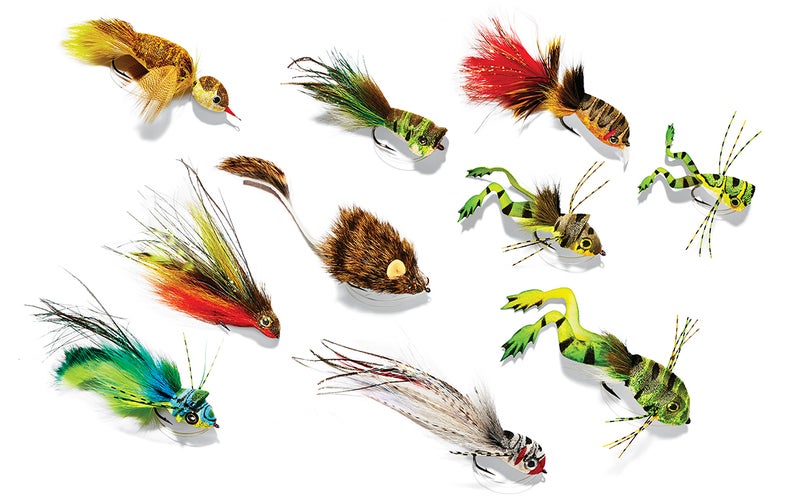 Fishing is inexorably connected**** to moments in time. Anglers are expert at living in the moment—both mind and body completely immersed in the situation at hand without a care given to future obligations or responsibilities. We are motivated by anticipation of the moment—that precise tick of time when a waggling bobber plunges below the surface of a mirror-calm summer pond; when a tripped tip-up flag instantly brings life to a frozen lake on a subzero day; or when a largemouth bass thuggishly attacks a surface bait in a sprawling bed of lily pads.

“Yeah, that is totally it,” says 39-year-old Cobbleskill, N.Y., native Pat Cohen. “The toilet flush—when a big ol’ largemouth blows up on a topwater. And when it’s on a deer-hair bass popper? Then it’s just crazy. It’s the rush that we live for.”

“Bass bugs have it,” explained former Outdoor Life fishing editor Joe Brooks in his seminal book, Bass Bug Fishing. “The tying of them brings forth the latent inventive genius of all those who go in for making bugs. The fashioning of a bass bug calls for a delicate hand and a vivid imagination. To be able to turn out a perfect one is an art. It also requires a lot of hard work.”

Brooks, the father of modern-day flyfishing, couldn’t have foretold Pat Cohen’s sudden impact on the bass-bugging scene with greater prescience.

“Pat Cohen really pisses me off,” wrote Michiganfly.com blogger Dan Moser. “He does things that are absolutely unnatural and seemingly impossible with deer hair. Pat has an unbelievable amount of talent.”

Indeed, through his art, Cohen has found himself at the forefront of a resurgence in the popularity of bass fishing with deer-hair flies. Considering he only began tying in 2009, that’s pretty remarkable.

An American Tradition
Unlike flyfishing for trout, bass bugging was born and raised in America. According to Ray Bergman, one of the great angling authors of the 20th century, its roots can be traced back to the Seminole Indians in the mid 18th century. Its history thereafter, however, is complicated, mainly because its popularity is constantly in flux. The introduction of the spinning reel in the 1940s, for instance, accelerated a decline in its appeal, as did a growing division between fly anglers and bass fishermen.

“Bass bugging is an extremely crude form of flyfishing, if flyfishing it can be called,” wrote Jason Lucas, the former fishing editor of Sports Afield, in 1947. “A child of average mentality should learn bass bugging in a few minutes.”

Dave Whitlock, Tom Nixon, Nick Lyons, and Tom and Bob McNally breathed new life into fly-rodding for bass in the 1980s. But a deep-rooted schism between the fly-angling elite and blue-collar bass fishermen, cleaved by a rekindled romance associated with trout fishing, remained. 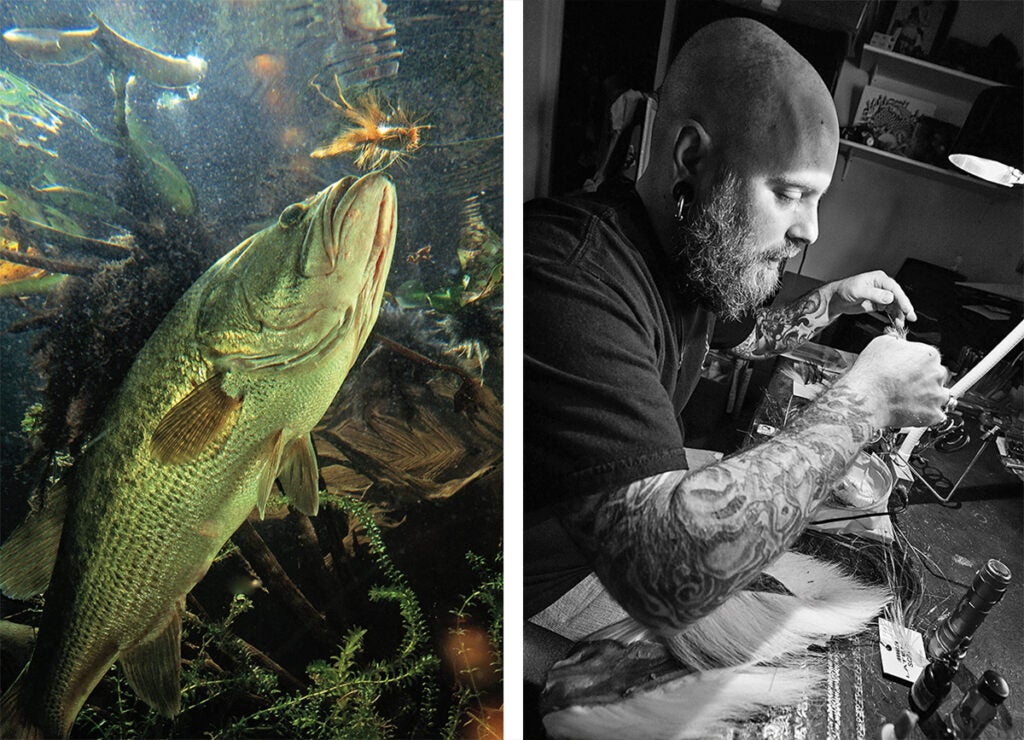 Left: A largemouth prepares to lower the boom on a deer-hair bass bug. Right: Fly tyer Pat Cohen at his vise in upstate New York.

Crazy Bugs
If a consequence of Pat Cohen’s artistry is a return in popularity to a long-neglected pastime, it would certainly be cause for celebration—made all the more improbable by the fact that, until a few years ago, the man leading the charge was more adept at delivering ink to skin than fly to fish.

“I’ll be totally honest. I was a terrible fisherman—couldn’t catch fish at all,” says Cohen, who for years made his living as a tattoo artist. “I’d fish Schoharie Creek in Upstate New York with my dad and my brother all the time—mostly chucking worms to smallmouths—and not catch anything. Then one day in the summer of 2008, we went fishing and I found this combo fly rod in the trunk of the car. I stepped into the river and started waving it around and whipping the water to a froth, not knowing what I was doing and still not catching any fish. But something clicked. I don’t know that you’d call it an epiphany, but something happened to me that day. The first fish I caught on a fly was a smallmouth, and my fascination just grew.”

Born both out of financial necessity—Cohen was quickly going through a king’s ransom worth of Woolly Buggers—and as a new way to express his artistic skills, tying flies became an obsession. He immersed himself in it, first by devouring books and magazines on the subject, followed by frequent but unfulfilling trips to the local fly shop.

“At first it was pretty disappointing,” he says. “They were pretty arrogant. I was mostly interested in warm-water fishing and tying and, well, it was a trout shop.”

Nowadays, the self-taught vise master is a full-time commercial tyer who creates all manner of flies, from nymphs to streamers. Deer-hair bass bugs, though, remain his primary focus and passion.

“When I sit down to design a fly, it is out of necessity,” he says. “I think about what I want the fly to do, how I want to strip it, the motion I’m looking for, and where in the water column I’m going to be fishing it. Then I consider all of my materials and what each of those does in the water. Then I build a prototype and test it. The process keeps going until I am pleased with everything about the fly.”

Critical to the process is the technique he uses to shape and form the deer hair. Spinning deer hair around the hook is the most popular method and ensures even coverage. Stacking, or compressing, deer hair in layers ensures a dense body or head. By all counts, Cohen’s stacking skills are unparalleled.

“Stacking allows more hair to be put on the hook, creating more density,” says Cohen. “The fly absorbs less water and also allows you to use glue between layers, creating a more durable bug. More important, it allows you to control every bit of hair that goes on the hook. So if you want a bug with bars or a different-color belly, stacking gives you that freedom.”

The Fugly Packer allows Cohen to stack and ­compress deer hair on a hook prior to razor sculpting.

Bugging Technique
Strong-arming a stout fly rod in order to whip big, clumsy wind-resistant bugs demands perspective. When compared to deftly flitting a dry fly toward a fishy eddy, plopping a huge creature fly next to a deadfall with a pool-cue-thick rod and straight mono leader might not seem to require much skill—but it does.

While the bug-casting technique is similar to that used in presenting conventional trout flies, their size, weight, and wind resistance cause bass bugs to travel more slowly. Therefore, the pickup, back cast, and forward stroke all take a bit longer. Most anglers can effectively fish small bass bugs with a 6-weight trout rod, but 7-, 8-, and even 9-weight sticks are preferred.

“I’ve got several different outfits that I fish bugs with,” says Cohen. “My favorite is an old-time Fenwick. It’s a 9-foot 9-weight, and it’s matched to a Pflueger 1498. I normally use a straight mono leader with it.”

Cohen’s creations have odd names such as Punk Rocker, Hot Butt Toad, and Big Ben, but they all fall into one of three traditional bass bug genres: poppers, divers, and sliders.

Flat-faced poppers, also called chuggers, have been a staple among bass fishermen for decades; think of them as deer-hair versions of a Hula Popper. Cast them into structure or weeds and use a short-strip-and-pause retrieve to cause the bug to pop and gurgle on the surface.

Because they plunge and wobble on long-strip and steady retrieves, divers are the go-to pattern when fish won’t hit on the surface. Larry Dahlberg’s Dahlberg Diver remains one of the most popular diver patterns ever created. Cohen’s version, The Crank, sports a lip like the Rapala lure it’s designed to imitate, which causes it to dive and wiggle.

Sliders are fished slowly on the surface with subtle motion. Their slightly convex face results in a longer bubble trail when twitched and paused.

The appeal of deer-hair bass bugs, however, is in the noise and disturbance they cause on the surface of the water—as well as the anticipation they build within the angler. And when the toilet flushes, you won’t be thinking of the elitists at the fly shop or the blue collars on the bass boat. Instead, you’ll be caught up in the moment of surprise that every angler lives for—and dying for the next bite.