Is the world's most versatile hunting firearm a handgun? Could be. The Smith & Wesson Performance Center 500 can handle every huntable animal you might encounter. It shoots loads light enough for varmints, heavy enough for thick-skinned dangerous game and flat enough for long-distance species such as sheep or antelope. 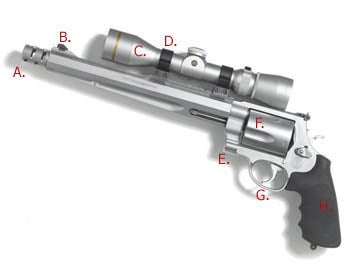 Is the world’s most versatile hunting firearm a handgun? Could be. The Smith & Wesson Performance Center 500 can handle every huntable animal you might encounter. It shoots loads light enough for varmints, heavy enough for thick-skinned dangerous game and flat enough for long-distance species such as sheep or antelope.

A. Compensator Its 360-degree design throws flame like the exhaust from a Top Fuel dragster but it helps tame the .500’s formidable recoil, making 275- and 325-grain loads kick less than a .44 Mag. It also acts as a barrel nut, suspending the barrel in the barrel shroud. In essence, it pulls the barrel between the frame and compensator, eliminating barrel stress and enhancing the revolver’s accuracy.

B. Barrel Smith & Wesson’s Performance Center offers the 500 in three barrel lengths (6½ inches, 7½ inches and 10½ inches). The 10½-inch barrel pictured here gives the best performance with the various loads for the 500, both in terms of velocity and accuracy. All Performance Center 500 barrels are made by Lothar-Walther and are precision ground at both the crown and the forcing cone, where the barrel extends through the frame. What you actually see is the barrel shroud. The barrel itself is contained within it, suspended between the frame and compensator.

C. Scope Traditionally, hunting handguns have been effective to about 100 yards or so (the exception being some single-shot handguns chambered for rifle cartridges). However, with the downrange energy and trajectory of the 500, the only limit is your shooting ability. Leupold’s VX-III 2.5-8×32 extended-eye-relief scope lets you reach out there as far as your skills will allow. With a proper rest (see below) and shooting technique, handgunning out to 200 yards is no longer out of the question. ($470; 800-237-4444; cabelas.com)

D. Rings Not just any scope ring will withstand the punishing recoil generated by the 500’s heaviest loads. These cross-slot-style rings from Leupold-the company’s PRWs to be exact-offer the best grip because they have metal tabs that sit in the integral grooves machined into the top of the revolver’s barrel shroud. This integral Picatinny-style rail-available only on the 10½-inch model-eliminates the need for a separate scope base, which is another accuracy-enhancing feature of this revolver.

E. Chin The chin in front of the trigger guard is the best spot to rest a handgun when you’re using shooting sticks or any other shooting aid. Placing the barrel (or the barrel shroud, in the case of the Performance Center 500) of any handgun on a rest can introduce accuracy-destroying stress, especially when you’re shooting at longer distances.

F. Cylinder With its five charging holes, the 500 gives you better backup capability than most rifles. And with the exception of a double rifle, a revolver gives you the quickest follow-up shots of any repeater in the event of a misfire, a comforting advantage when you’re hunting dangerous game.

G. Trigger Crisp as a mountain trout stream, the trigger is tuned to break at 4 pounds in single-action mode. The Performance Center hammer and trigger components are forged, not metal-injected, which allows them to be matched up for a crisper let-off and better trigger pull.

H. Grip Smartly designed grips by Hogue feature a gel insert where the web of your hand rests to help dampen the 500’s kick. Made of a material called Sorbothane, the insert acts just like a recoil pad on a shotgun or rifle.

$ Price Custom guns never come cheap, but given that the Performance Center 500 is built by hand by master craftsmen and will put every bullet right where you point it, the $1,391 price tag doesn’t seem quite so unreasonable. (800-331-0852; smith-wesson.com)

Hornady 500 gr. XTP FP
Muzzle velocity/energy 1,425 fps/2,254 ft.-lb. Best for Heavy and dangerous game details When your goal is deep penetration and a large, leaky hole, this flat-nosed sledgehammer will do the trick.

Take a Rest
The Explorer Monopod from Stoney Point telescopes from 25 to 62 inches, so you can shoot from a sitting, kneeling or standing position. Don’t be tempted to grip the monopod when shooting a revolver unless you enjoy getting burned by the cylinder flash. Use a two-handed grip instead. ($41; 507-354-3360; stoneypoint.com)

Sling It
Light isn’t one of the words to describe the 500. This sling from Uncle Mike’s, included with the gun, was inspired by the straps golfers use on their club bags and makes lugging the 500’s 82 ounces around much easier. The strip down the middle of the cushioned pad grips clothing to minimize slippage.