Benjamin Armada Review: A Hunting Air Rifle Made for the Range 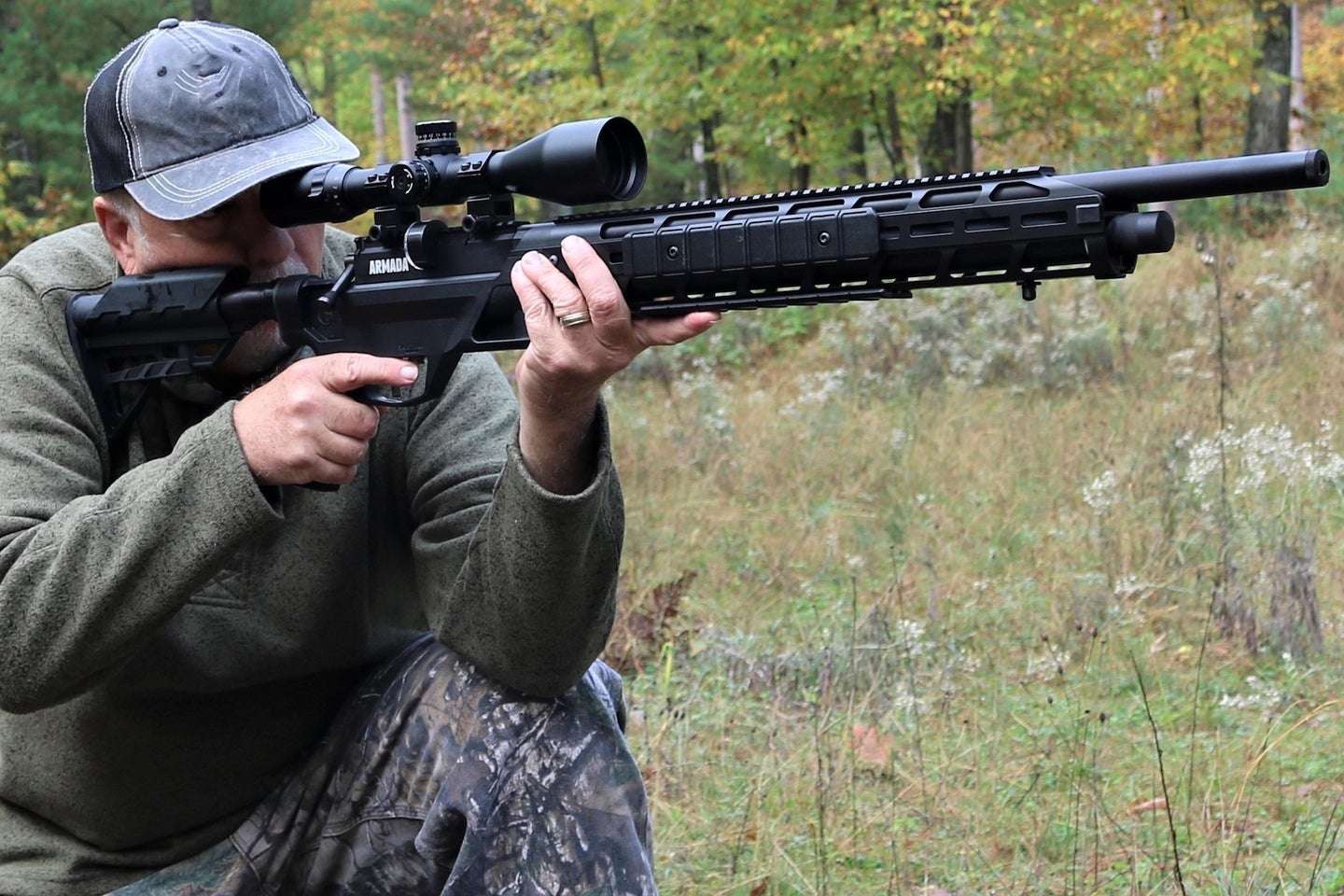 The first precharged pneumatic air rifle that Crosman brought to market, under their Benjamin brand, was the budget-priced, single-shot Discovery. That rifle was soon followed by the larger and more powerful Marauder platform, which featured a quality trigger, a fully shrouded barrel, an efficient and reliable magazine, and availability in .177, .22, and .25 calibers. I tested and reviewed the Benjamin Marauder in 2021, and it has stood up well to the test of time. The Benjamin Armada is the rifle that continues the Marauder’s legacy. Think of it as an evolutionary step forward rather than an entirely new pellet gun. The trigger assembly, the cocking action, the magazine’s performance, and the excellent sound reduction provided by the shrouding system are all top line.

The Marauder has become a very popular rifle because of its performance, but many owners improved its ergonomics because it was too chunky for some shooters’ tastes. It also couldn’t incorporate the range of accessories they wanted. This is where the Armada comes in. The solidly functioning internals of the Marauder persist in the Armada platform, but are enhanced with a modular design that allows for easy mounting of many different accessories.

The Armada air rifle has a Magpul M-LOK rail system with an adjustable AR-style stock and grip frame. The result is more than just a cosmetic exercise in changing a traditional sporter into a tactical looking rifle—it provides the flexibility for the rifle to be optimized for the individual shooter. Further, the new stock configuration provides convenient mounts for lights and lasers used for nighttime predator hunting, or a bipod for benchrest or other competitive target shooting events. The bolt is reversible for left-hand shooters.

The Benjamin Armada is a large gun, with a 20-inch rifled and choked barrel and an overall length of 42.8 inches, weighing in at 7.3 pounds without a scope. A bolt-action mechanism cocks the rifle, which auto-indexes the 8-shot (in .25 caliber) rotary magazine. Loading the magazine is quickly accomplished by rotating a clear faceplate (an arrow indicates the proper direction) and inserting the first pellet while keeping a finger on the offside to stop it dropping out. The next seven pellets are then loaded headfirst. After you get the hang of the loading process, it is fast and easy, which I always appreciate in hunting air rifles (and all hunting guns).

This rotary magazine is the time-proven design carried over from the Marauder—which is priced quite reasonably—in case you want to carry an extra magazine when hunting.

The Armada’s 215cc air reservoir is capped with a quick release male Foster type fitting—something I wish all manufactures would use for filling their guns from an external air source. It is fast, easy, standardized, and circumvents problems such as losing (or packing the wrong) fill probe. A pressure gauge beneath the forestock allows monitoring of the air pressure during operation.

The bolt action is positioned at the very rear of the receiver, and is accessible and easy to work without lifting your head from the cheekpiece. It is smooth and offers a good tactile response, and the bolt handle is substantial and comfortable to use.

The trigger is a two-stage adjustable design that is set up to be used out of the box. I’ve been shooting the Benjamin Armada with the factory setup, and have been happy with the trigger’s light take-up, crisp break, and minimal over-travel. The first stage of trigger pull is approximately 1.8 pounds for the take-up, and another 1.2 pounds for the final pull. I really like the flat metal trigger blade—it is my preferred configuration.

One of the first things you notice when shooting the Armada is that it is a very quiet rifle. The integrated shroud does an excellent job of keeping the gun’s sound signature low. This is a rifle you can shoot in the backyard or in the basement without disturbing your next-door neighbor.

For my range tests, I shot the Armada off a BOG Death Grip mounted to a tabletop tripod rested atop a portable bench.

I shot a 50-pellet string at 40 yards using JSB King Heavy 33.9 gr Diabolo pellets, which yielded a peak velocity of 810 fps, a minimum of 647 fps, and an average of 761 fps. (In the spirit of full disclosure, I must mention that I burned 5 shots early in the string due to either a chronograph failure or shooting on an empty chamber.) This generated a power output ranging from  34 ft.-lbs. To 49 ft.-lbs., with an average of 43 ft.-lbs. At 40 yards, all 50 shots went into a group that could be covered by a quarter.

The trigger stood out. The mechanism was buttery smooth, consistent, and very responsive, and the trigger blade provided outstanding control. Outside of rifles in the very expensive premium price range, this is one of the best stock triggers I’ve used in a production air rifle.

Hunting with the Benjamin Armada

After sighting in and familiarizing myself with the Benjamin Armada, I took it on a couple of squirrel and rabbit hunts. On the first morning in the squirrel woods, I found that even though the rifle is large, it carried well, and I could shoot it accurately leaning against a tree trunk or with the rifle thrown over a low hanging branch. While hunting rabbits in more open agricultural areas the following morning, I found the gun easy to shoot while standing offhand, braced on my leg while kneeling, or rested on my bipod shooting sticks.

The Armada paired with the heavy pellets I selected, anchored game between 20 to 70 yards. The long shots required a bit of holdover, but that’s part of the fun of air rifle hunting.

I found the controls to be well laid out and easy to access under stress. Actions such as cocking the gun, operating the safety, and reloading magazines were intuitive and required minimal movement.

What the Armada Does Best

The Armada is an accurate and powerful rifle that cycles quickly and smoothly, while reliably auto indexing the rotary magazine. The rifle is ergonomic, well balanced, and comfortable to shoot rested or offhand. Even though it is a bit longer than I would normally opt for, it is lightweight and packs well.

From a hunting perspective, the Benjamin Armada is a solid platform for building out a long-range shooter for prairie dogs or groundhogs. The long forestock and mounting system lend themselves to providing a stable hold on bipods or a rest. Generating energy in the mid 40 ft-lb range, this rifle has the power to anchor small game out to 100 yards and possesses the intrinsic accuracy to make this possible.

I think that the Armada is also a good option for those wanting to build a competition rifle for a reasonable price. Many aftermarket components, such as tuning kits and even third party pressure regulators, can be used to refine and optimize the performance of this already strong performer. This will allow Armada owners to shoot at a competitive level for benchrest, field target, and other disciplines, and have a respectable hunting rig.

What the Armada Does Worst

My personal bias is toward more compact guns for a general hunting rig, and the overall length of the Armada is at my upper limits for a field gun. I know a lot of shooters don’t put as much emphasis on this characteristic as I do. The gun is not too heavy and balances well, but to make this gun perfect for me, I’d like to see a carbine version.

It would be nice to have the option for a factory mounted regulator, but even without being regulated, the Armada is acceptably consistent. With respect to a field gun, I think it is perfectly fine as is. If you want to build out a dedicated long-range hunting rig or a benchrest rifle, I think it would benefit from either an aftermarket regulator or a tuning kit.

Final Thoughts on the Benjamin Armada

The Armada has many positive attributes such as accuracy, power, ergonomics, customizability, and overall shootability. But how does it address my “real-world” airgun shooting and hunting needs? And would I buy the Armada or the Marauder if I had to choose between the two? The answer is that it depends.

If I want a gun for packing in the woods or hauling over vast desert landscapes, I’d probably gravitate towards the Marauder. On the other hand, if I wanted a gun that could be set up for long-range varmint hunting one weekend and a competitive shooting event the next, I’d choose the Armada. If you are a shooter that prefers a tactical look and feel over the more traditional sporter designs, and the ability to implement off-the-shelf MagPul and other AR 15 components, going with the Armada would be a no-brainer.

All of this is subjective to some degree. But if your needs are accuracy, power, shootability, reliability, and expandability, the Benjamin Armada will have you covered.