The Benjamin Bulldog is a futuristic-looking pcp air rifle in .357 caliber 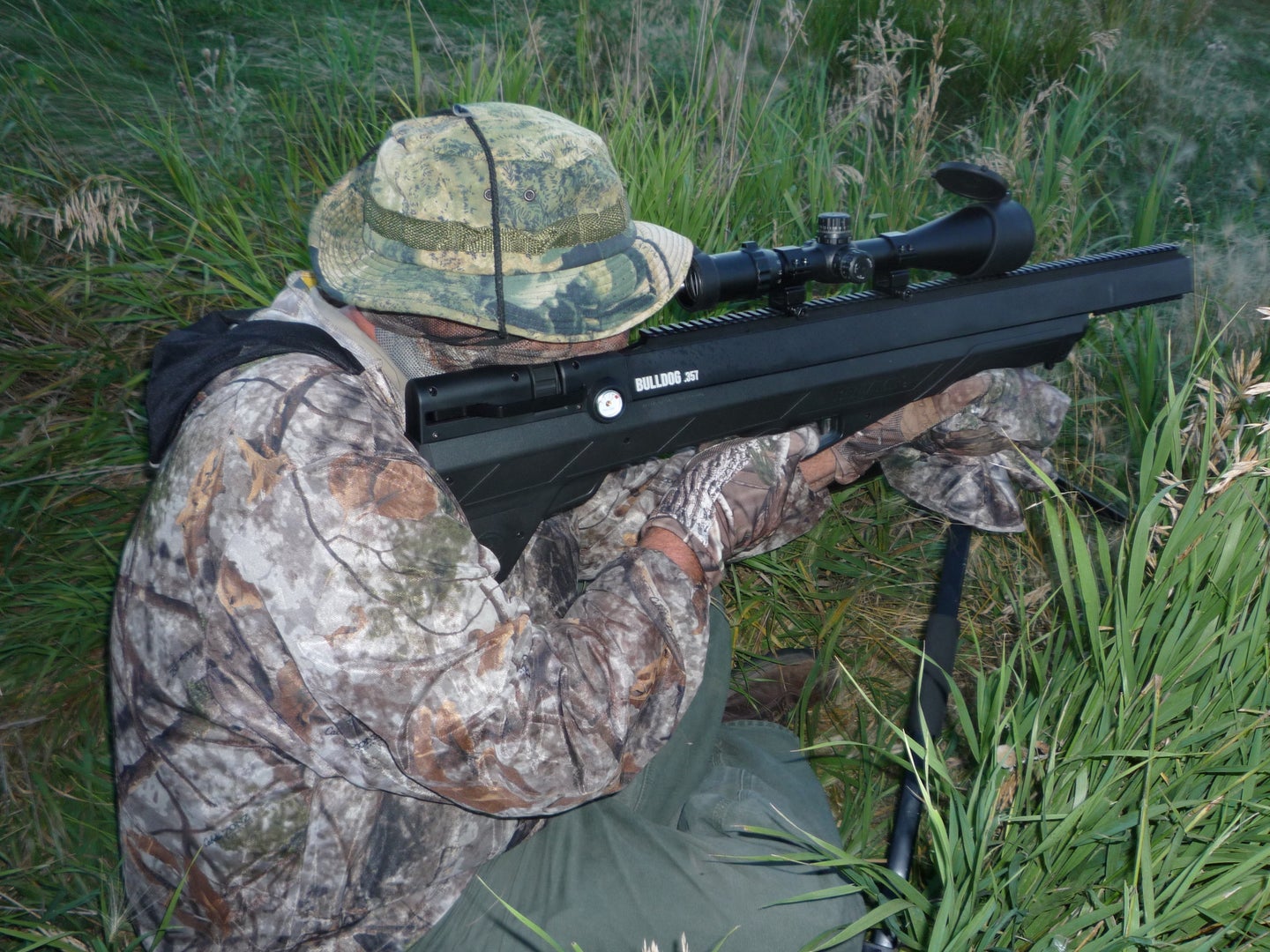 The Benjamin Bulldog rifle is a .357 caliber bullpup PCP air rifle. Its futuristic look, multi-shot design, and power output set it apart from other hunting air rifles on the market. It sits between the .22 and .25 caliber airguns best suited for small game and the larger .457 and .50 caliber air rifles commonly used to hunt big game. That’s why I find it to be best suited for hunting hogs and predators.

The Bulldog is not an exceptionally powerful big bore, in part because of the caliber selection—an air rifle can only do so much with a .357 slug. The gun is powerful enough for larger game under the right conditions, however, and has proven itself in the field—as I’ve taken several hogs with it. The Bulldog can generate 180 to 200 ft-lb out-of-the-box for the first few shots, then starts to drop as the pressure falls off. That’s far from the 800 ft-lb produced by the most powerful air rifles, but still plenty of punch for medium-sized game.

As with so many of the popular production big bores introduced over the last few years, a cottage industry of tuners has grown around this gun and can bring the power up even higher yet. This is important because there are requirements on caliber and power output for a gun to be a legal method of take for game animals in some venues, such as Texas.

Most big bores on the market today are single-shot designs, however the Benjamin Bulldog has a multi-shot magazine, a smooth sidelever action that cycles and auto indexes the rounds quickly and reliably. It also has a good trigger, and it is compact and lightweight, with an ergonomic and rugged synthetic stock. The other thing that Crosman did—which I think was a great call—was to make sure the Bulldog was set up to digest the Nosler Ballistic Tip eXTREME air rifle bullet the company had developed in collaboration with Nosler for the Rogue. I was always impressed with this projectile and have used it with many of my more powerful .357 air rifles over the years.

The Benjamin Bulldog rifle is a feature-rich hunting rifle and yet remains moderately priced. What I find particularly appealing is that the gun fills to 3000 psi, bucking the recent trend to have guns charging up to very high pressures (i.e. 4500 psi), which makes the logistics of charging the rifle easier. But what makes this more impressive is that from this 3000-psi fill pressure, the Benjamin Bulldog generates ten full power shots.

As mentioned, a standout feature of this Benjamin air rifle is the multi-shot magazine. This is a rarity in the world of big-bore air rifles, especially those designed specifically to handle slugs and bullets. The magazine is easy to remove and reseat in the magazine well, and the five bullets can be loaded very quickly.

The Bulldog uses an ambidextrous synthetic stock that has an overall length of 36 inches, while managing to incorporate a 28 inch rifled barrel. The barrel is fully shrouded and housed within the futuristic-looking stock. The integrated shroud does a good job of reducing the sound signature, but there is still a healthy report. The rifle weighs in at 7.5 pounds before a scope is set on top and uses mounts that are compatible with a Weaver/Picatinny rail.

The gun is cycled with a sidelever mechanism, and again, I must give credit to Crosman for moving to this set up before it had gained the mainstream popularity it now enjoys. The gun has a low cocking effort, and auto indexes the 5 shot rotary magazine smoothly and reliably.

There is a 340cc air reservoir, that fills to 3000 psi, and generates 10 shots per fill. The gun is attached to the air source for filling, with a standard quick-release Foster type fitting. At the time of the initial release, many big bores were still using a proprietary fill probe. This was another of those little details that Crosman incorporated, and I appreciated.

To summarize the features that stand out on the Bulldog: it is compact, it is a multi-shot repeater, it has a high shot count, it comes standard with a shrouded barrel, and in the year or so I hunted extensively with it, it was completely reliable. These are many of the key attributes I look for in my hunting guns.

Benjamin Bulldog Performance on the Range

I took the Bulldog for a day on the range with a variety of ammo that included the 145 grain Nosler eXTREME, 77 grain JSB .35 Exact Diabolo air rifle pellets, the 82 grain H&N HP, and a 117-grain cast lead HP slug a friend had cast for me and set up on the bench with the target at 30 yards.

I started off with a 10-shot string, using each of the four projectiles—you can see the results in the attached figure. The highest velocities were unsurprisingly achieved with the lightest pellets, but across the board I was impressed by the consistency and the predictability in the falloff of power as the pressure dropped. Effectively, there was little shift in the point of impact, as demonstrated in the targets.

The best accuracy was achieved with the Nosler eXTREME bullets and the H&N slugs, though the JSB pellets were quite close. As a matter of fact, there was no significant difference with any of these three projectiles, and all would be fine for hunting. However, I would opt for the eXTREMEs if hunting larger quarry or reaching out to longer ranges. I would opt for the Grizzlys if targeting predators and going for those longer shots, and save the pellets for predator-sized game at closer ranges, like a suburban coyote hunt. The cast bullets did not fare so well, but I’m sure if I keep searching, I’ll find one that works. Airguns are notoriously picky about their individual preferences in ammo, and sometimes you need to try a few to get dialed in.

The gun was easy to cycle, the magazine auto indexed reliably, and the trigger broke crisply, with a trigger pull of 3.2 pounds. I found the stock comfortable and ergonomic, though I’ll mention one aspect I wasn’t crazy about later. My rifles’ scope is set up with medium profile mounts, and it affords a good sight alignment. The air gauge (manometer) on the right side of the Bulldog was easy to read, providing an accurate display of pressure while shooting.

Testing the Benjamin Bulldog in the Field

I have taken the Bulldog on several hunts after hogs and rams, as well as on many predator hunts for coyote, fox, and bobcat. With its compact dimensions, the gun is easy to pack over long distances or move through thick vegetation. I find that when shooting offhand, the Bulldog comes nicely to my shoulder and is well balanced for a stable hold. Conversely, it shoots well off sticks in either a sitting or kneeling position, allowing quick and unimpeded cycling of the action.

What the Benjamin Bulldog Does Best

In my mind, this rifle is at its best as a predator gun. It’s appropriately powered for clean 100-yard kills on coyote. Flat shooting and accurate, the action and magazine allow for fast follow-up shots when required. I also appreciate the high shot count the gun provides from a 3000-psi charge, which demonstrates a well-designed valve and air management system. Though the Bulldog is not regulated, Crosman has done a very good job of balancing the springs and achieving impressive consistency. At the end of the 10th shot, the velocity falls off significantly, but I usually charge up after each magazine.

While this gun, or any .35 caliber, would not be my first choice in a big game gun, it is a viable option for deer or hogs. So, if you’re looking for one gun to use for all your hunting—and most of which will be predator hunting with a few days of the year out after deer—the Benjamin Bulldog could well be the perfect gun for you. You will need to adjust your hunting approach accordingly, keeping the shots in closer and picking shot placement carefully. The last item you need to check is your state’s legality; many venues that allow big bore airguns for deer hunting have a caliber or power requirement. For instance, when deer in Indiana, the gun must be at least a .40 caliber, and in Texas a .30 is legal, but the gun must be generating a minimum of 215 ft-lb.

What the Benjamin Bulldog Does Worst

There are a few items I’d change if I could. The Benjamin Bulldog is chunky and angular, and has a decidedly futuristic look to it—some people like it, but my sense of aesthetics go in a different direction. Granted this is a subjective call. If you like the futuristic vibe or are a strict adherent to “form following function,” this is a non-issue. The stock is a synthetic and has a somewhat plasticky feel to it, but again: it’s form following function.

The last item is the position of the side lever. When the shooter’s cheek is locked into position, the cocking lever is situated behind the cheek weld. This means that the shooter must reach behind this point to cycle the gun. I find this slows down the cycling of the action, though it is still faster than almost any other big bore. I would have much preferred to have had the sidelever moved closer to the trigger. Having said this, the ergonomics of the gun are still excellent, and you can learn to work around this.

Final Thoughts on the Benjamin Bulldog

As a hunting rifle, the Bulldog checks all the boxes. A good power profile, accurate, high shot count, fast action, and a five-shot rotary magazine all make this a strong contender for anybody looking for a multi-purpose hunting rig. I have used the Bulldog on and off for the last several years, and have found it to be rugged, reliable, and effective—I’d recommend placing this mid-sized big bore on your shortlist. It has all the fundamentals nailed down, but as I’ve often said, once those core requirements are met, the rest comes down to individual preferences.