As a longtime fan of the venerable HK MP5 submachine gun, I was thrilled when Sig announced the MPX submachine... 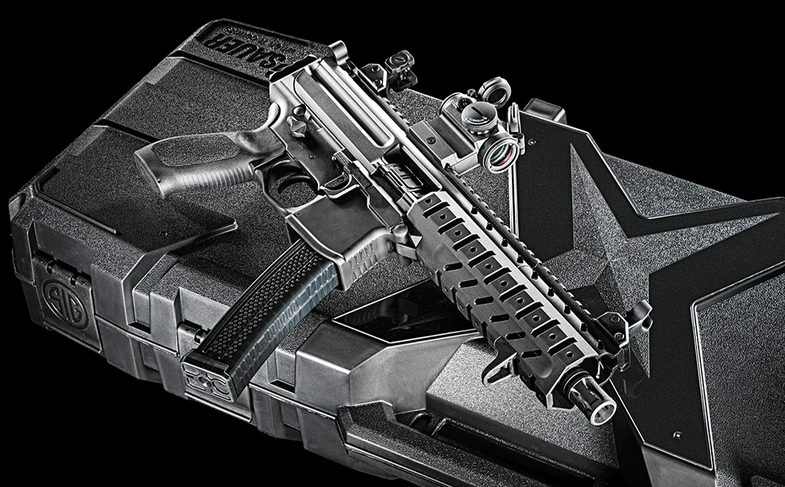 As a longtime fan of the venerable HK MP5 submachine gun, I was thrilled when Sig announced the MPX submachine gun platform. My first impression of the MPX was very positive; I could see that the designers at Sig fused the classic HK MP5 functionality with an AR-15 to come up with what I would call a version of the MP5 for the 21st century.

Even though there have been 9mm submachine gun versions of the AR-15, they are just full-size AR-15 receivers that have been retrofitted to accept 9mm magazines, 9mm bolt carriers, hammers, and buffers, along with a 9mm barrel. The Sig MPX has been designed from the ground up as a modular 9mm submachine gun, with the various models sharing one common lower receiver with various handguards, stocks, and barrels to complete the system.

Like an AR, but Different
The MPX disassembles almost the same way as an AR-15, with a two-pin system that separates the upper and lower receivers. The firing mechanism is also the same as the AR-15’s, but it is specifically designed for the 9mm caliber.

The MPX features an ambidextrous thumb safety similar to that of the AR-15 platform, and the magazine release and bolt stop are also like the AR-15 in function and appearance. They are ambidextrous too, with the exception of the bolt release. While the shooter can release the bolt from both sides of the MPX, he can only lock the bolt back from the left side of the firearm.

The charging handle is almost identical to its AR-15 counterpart but is smaller in size. The bolt carrier system is also similar to the AR-15’s system. But unlike the direct impingement design on the AR-15, the MPX uses direct blowback to cycle the firearm.
One major difference is the recoil spring system. On the Sig MPX it’s a double-spring assembly captured on two individual guide rods. This modular system makes the MPX simple to disassemble for quick cleaning and maintenance.

The grip on the MPX is virtually identical to that of the AR-15 and can actually be interchanged with AR grips with little effort. The handguard system is also modular and machined from aluminum, and it’s streamlined and narrow, which I found quite appealing.

To install accessories, the MPX comes with three 2-inch rails that attach to the handguard.

Semi-Auto Pistol
We tested the MPX-P, the semi-automatic pistol member of the MPX family. It has an 8-inch barrel with an A2-style flash hider. A very useful hand stop is included to prevent the shooter from putting a hand near the muzzle. The hand stop can be repositioned or removed as desired.

This version doesn’t have the tube and arm brace like the MPX-PSB does. It ships with a bungee-style single-point sling to improve stability and accuracy while firing. The MPX-P ships with a 30-round steel-lip magazine manufactured by Lancer, but 10- and 20-round mags are also available.

Decking It Out
Even though this pistol is new, aftermarket parts are already available. Guntec USA makes a stock adapter for the Sig SB15 brace, an aluminum angle grip, and a micro flash can, which functions as a flash hider. The aluminum angle grip, which is comfortable and ergonomic, also includes the useful hand stop.

We took the MPX-P to the range and tested it for accuracy at 10, 25, and 50 yards, using an Aimpoint Micro T2 sight. We used three kinds of ammunition: the classic Remington UMC 115-grain FMJ, ASYM Precision 147-grain FMJ, and reloads with Rainier Ballistics 124-grain TMJ bullets. We shot 5-round groups from the three distances, and our results were fairly consistent from distance to distance. The ASYM Precision Ammunition edged out the Remington, and both did better than the reloads. We also chronographed the three loads as part of the comparison.

This production version of the MPX-P performed flawlessly. Between the sighting-in process, accuracy testing, and rapid-fire reliability testing, it didn’t fail once. Feeding, firing, extracting, and ejecting were flawless. Better yet, the gun is fun and accurate. Sig has a winner on its hands.

Another option to reduce muzzle flash is Guntec USA’s Micro Flash Can.

This Guntec USA adapter allows you to attach a brace to the Sig MPX pistol.