Kimber's new rifle proved to be a classic, lightweight sporter. 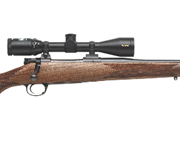 The Kimber 84L is a remarkable rifle, with charm to spare. This svelte new addition to the Kimber family fits neatly between the 84M and the 8400 models, and, like its older siblings, is constructed with trim dimensions that make its competitors look a bit sluggish by comparison.

The new action is sized for America’s favorite deer cartridges, the .30-06 and .270 Win., and fills a gap in Kimber’s lineup between the 84M’s .308-size action and the 8400, which was built to accommodate both standard and short-fat magnums.

The initial run of the 84L is also chambered in .25-06, another excellent deer cartridge, though one that has always lived in the shadows of the .270 and 30-06. And we’re sure you can expect to see more calibers added in the future.

Racy Lines
Even a casual glance at the 84L reveals its cut-down dimensions. The barrel has a light contour; the stock maintains an elegant and slender profile throughout its length; and the entire bolt assembly has been machined down, if not to the bare minimum, then to something that is pretty close to it. You can see this not only in the bolt body and the bolt handle, but even in the tab on the three-position Model 70’s style safety, which has been shrunk in proportion to everything else.

The word “proportion” is key here and lies at the heart of the beauty and genius of the 84L. Nothing on the rifle is ungainly. Its elements flow together seamlessly, and as a result, the rifle cuts a dashing figure.

It would be simple enough to list in detail the specific places where the rifle has gotten rid of excess material, but that rather misses the point, which is how the rifle feels when it is shouldered and fired, which is wonderful.

By way of comparison, I suppose it is worth noting that the 84L weighs just a touch over 6 pounds unscoped and empty – in contrast to the 7-pound or 8-pound rifles that one commonly sees in these calibers. That gives a sense of what Kimber has accomplished here.
**
Classic Construction**
This all wouldn’t count for much if the 84L wasn’t also built well with quality materials, but like all of Kimber’s rifles, it is. You can get the 84L in two grades, the “Classic” or the “Classic Select” (the version I tested), which comes with an ebony forend tip and upgraded French walnut for the stock, and is worth the extra $187 Kimber is asking for it.

The wood on my sample was light in color, and the hand-rubbed oil finish showed off the dark streaks of the grain to good effect. The grain ran straight as an arrow through the slender grip when viewed from both the sides and the top, which is just what you want to see for strength, especially in a lightweight sporter.

The checkering was equally well done in a functional classic pattern, and the stock’s inletting flowed around the curves in the metalwork as snuggly as a cocktail dress on a fashion model.

The action was glass- and pillar-bedded to provide a solid connection between the wood and metal. It showed that as much thought and care went into the interior of the rifle as the exterior.

Solid Performance
The action itself lives up to the “classic” designation, with its full-length Mauser claw extractor and two-lug rotating bolt design. The chrome finish on the bolt body and extractor contrasted nicely with the matte blue of the rest of the metal, again contributing to the rifle’s understated elegance.

The trigger on the 84L is adjustable, but as mine broke crisply at 2 pounds 9 ounces as delivered, I saw no need to fiddle with it.
I hadn’t read the rifle’s specs before I shot it, so I was pleasantly surprised to find that despite the stock’s narrow width, I could load five rounds into the magazine at the range.

My sample was chambered in .30-06, and I put five loads through the rifle, including Federal’s 168-gr. Match ammo, which the rifle shot best. I took time between five-shot groups to let the rifle cool, but even so, the slender 24-inch barrel quickly heated up, and by the fourth and fifth shots, the groups noticeably opened. The average group size for all ammo tested was 1.921 inches for five shots at 100 yards, with the smallest group coming in at 1.321 inches when I used the Match ammo.

Since animals are not hunted with the benefit of a bench rest, I spent a lot of time shooting the 84L from sitting, prone, kneeling and off-hand positions, and here the rifle really came into its own. Light rifles can sometimes prove difficult to control from unsupported shooting positions, but the 84L exhibited excellent handling characteristics, putting shots reliably into an 8-inch bull at 100 yards.

The rifle fed, shot and cycled flawlessly, and when it came time to unload, the all-metal magazine floorplate, with its catch inside the trigger guard, opened smoothly and easily to dump the unspent cartridges into my hand.
Kimber deserves a lot of credit for the 84L, a rifle that lives up to the company’s reputation for quality, value, craftsmanship and classic rifle design.

Report Card
Performance: B
Design: A+
Price/value: A
Verdict: By virtue of its stylish design and quality construction, the Kimber 84L deserves its “Classic” moniker.