This year we uncovered some amazing values, and high-quality knockouts among this year's new rifles 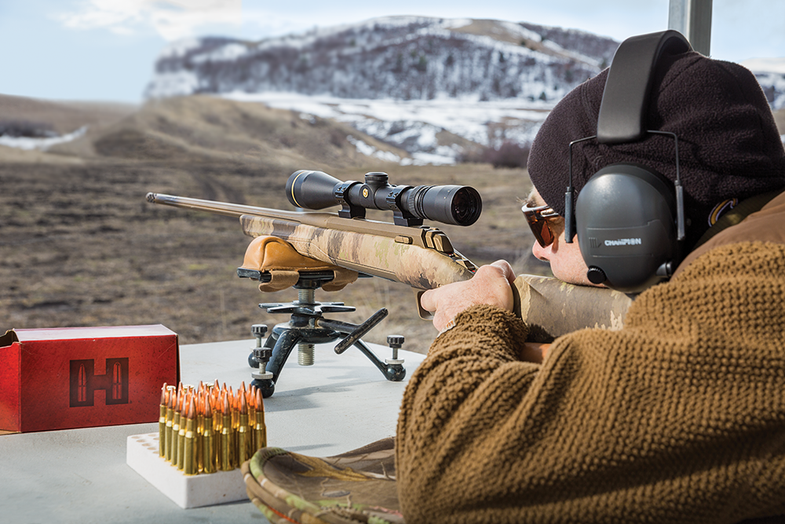 This year, gunmakers have developed rifles for a broad array of tasks and budgets.
SHARE

Outdoor Life’s gun test is serious business. It is a lot of fun as well, there’s no denying that. But beyond the smell of powder, the piles of hot brass, the sore shoulders, the ringing of steel, and the smiles on the faces of the shooters lurks a solemn task. That is, to gather fair and objective data about which of 2016’s new guns are worth you spending your money on.

Looking for shotguns? See our reviews of six new shotguns for 2016 here.

This year, gunmakers have developed rifles for a broad array of tasks and budgets. Among them, we have a bargain-priced magnum from Ruger, a stylish and accurate varmint rifle from Montana Rifle Company, a high-tech .308 from Christensen Arms, and an affordable scope-rifle combo kit from Howa that is built on a new “mini” sized action.

One windfall of the post-surge AR panic we experienced in recent years is a desire among gun companies to create interesting guns for all pursuits, and this year’s crop is representative of that trend.

The test spanned a full week and focused heavily on practical shooting tasks, not just punching paper for accuracy, though we did that as well. We shot prone in the mud, standing off fence posts, and sitting in the cheatgrass. We tested how fast we could run the guns with full mags, timed our reloads, and generally used the guns as we would while hunting. Here are our results.

This new iteration of the Browning X-Bolt—with its catchy camo pattern and metal finish, radial muzzle brake, and trim lines—hit an undeniable sweet spot with our crew of judges, all of whom are avid and experienced Western big-game hunters. After putting the Hell’s Canyon through our testing regimen, we agreed: This is a rifle any of us would hunt with.

Chambered in .30/06, our sample exhibited some fine accuracy, putting sub-MOA 5-shot groups on paper with several different loads, including three groups that measured smaller than .75 inch. But this is no mere paper puncher. The Hell’s Canyon comes up quickly, and running it from the shoulder was easy, especially with the added control offered by the recoil-­eating muzzle brake.

The rotary magazine is simple to load and sits flush in the stock. The trigger break was crisp at 4 pounds and is adjustable for a lighter or heavier pull. All the controls are positioned in a user-friendly manner that makes the rifle intuitive to operate.

More than any other rifle in this test, the Hell’s Canyon represents the best expression of its stated purpose. This is a big-game hunting rifle, through and through. It is durable and accurate, and it felt like an old reliable hunting partner from the moment we started putting rounds downrange.

What do you call a rifle that has great ergonomics and exceptional accuracy, and runs so smoothly that it seems to do so of its own volition? How about: nearly perfect. You can also call it our Editor’s Choice in the rimfire category.

This .17 HMR bolt-action wowed our test team during the evaluation for the effortless way it clustered bullets into bughole groups on our targets, and for its ability to hit steel at 200 yards from practical field positions.

The attention to detail on the 1517 and the amount of thought that went into its construction puts it in a class by itself. Its thumbhole stock, configured for righties, works surprisingly well for left-handed shooters too, which is extremely unusual. The two-stage trigger, which breaks at 6 ounces and adjusts for reach, is a thing of beauty. And the barrel, which has been threaded for a suppressor, features a muzzle crown that is recessed deeper than the threads to maintain accuracy.

The rifle particularly loved shooting 17-grain bullets, with 5-shot groups at 50 yards averaging .287 inch. Overall accuracy, with bullets from 15 to 20 grains, was .394 inch.
Now, why is the rifle “nearly” perfect? Well, its magazine capacity is a skimpy four rounds. This is an admittedly nitpicky concern, however, and didn’t detract from the performance of the rifle. Even at $1,650, this premium rifle is a good value given how well it is built and operates.

A good varmint rifle needs to deliver excellent accuracy and be configured so the shooter can see his hits (or misses). The Prairie Runner excels at both.

Chambered in .22/250, the Prairie Runner was one of our favorite guns to shoot. Its best 5-shot group measured .521 inch with a Federal 40-grain hollowpoint, but it shot numerous bullet weights very well, which is a testament to the quality of MRC’s barrels. The lovely 2-pound 1-ounce trigger helped here, too. Overall, we were smitten with this rifle’s looks and performance and would happily take it afield.

When I visited the Bergara barrel factory in Spain some years back, I knew this company was onto something. The trick was how to showcase their high-quality (and affordable) barrels on a rifle with the Bergara name that would resonate with the American sportsman. The Woodsman is that rifle.

This is a very traditional bolt-gun, with nicely oiled wood and classic American stock dimensions. It has a two-lug action with a 90-degree bolt throw, a two-position safety with finger-friendly texturing on it, a magazine with a hinged floorplate, and a good trigger. In a nod to modern sensibilities, it is topped with a Picatinny rail for the easy mounting of optics. The rail makes access to the loading port a bit cramped, however, and the test team found stuffing ammo into the rifle a bit awkward as a result.

The Woodsman delivered impressive accuracy, turning in sub-MOA groups with bullet weights ranging from 150 to 175 grains. Overall accuracy averaged 1.196 inches. For delivering such a solid rifle at a good price, the Woodsman earned this year’s Great Buy award.

This high-tech rifle stands out in a crowd. It has a thick carbon-fiber-wrapped barrel that, despite its profile, reduces the rifle’s weight. Christensen has gone to great lengths of late to make improvements to its products, and nowhere is this more evident than in its barrels.

The company says it now makes its barrels from scratch, drilling its own bar stock and cutting the rifling, in addition to wrapping the blanks in carbon-fiber resin after they’ve been contoured. This start-to-finish quality control has resulted in more consistent performance, and it showed on the range. Using match loads, specifically the iconic Federal Gold Medal 175-grain SMK, our Ridgeline turned in groups as small as .755 inch, and had no issue printing sub-MOA 5-shot groups. On average, our groups measured a respectable 1.149 inches.

The quality of the rifle isn’t limited to its tube. The action is slick and runs well, the trigger broke at just a touch over 2 pounds, and the rifle is a natural pointer.

We liked the geometry of the deeply curved trigger. Its broad face provided excellent control while shooting. It is also a handsome rifle. The colors of the exposed metal, the synthetic stock, and the carbon fiber give it a distinctive appearance.

This varmint gun—chambered in the newest rimfire on the market, the .17 WSM—has tremendous potential. It delivered some outstanding groups during our accuracy evaluation, with one measuring a puny .561 inch, which is no small feat for a 20-grain .17-caliber bullet at 100 yards in variable winds. And it did this despite having an unforgiving trigger pull of 7 pounds 5 ounces. We all wondered what this rifle might be capable of with a good aftermarket trigger installed.

Chambered in the useful and mild-recoiling 6.5 Grendel, this rifle and scope combo is a very good value. The detachable box magazine is good for rapid reloads and controlling the ammo when hunting with a youngster, though some of the judges didn’t care for the way the magazine latch protrudes. The rifle did everything well and in a workmanlike fashion. It digested all the ammo we put through it without any issues, delivering good accuracy with Hornady’s 123-grain A-Max factory loads.

The 6.5 Grendel is ideal for deer-sized animals and smaller game and is a great starter cartridge.

For 2016, Ruger decided to super-­size its American Rifle, creating a magnum-length action for cartridges like the .300 Win. Mag. and 7mm Rem. Mag. The original American made quite a reputation for itself based on its wickedly affordable price tag and outstanding accuracy.

The new Magnum doesn’t have quite the same mojo. In the words of one of our judges, it kicks like Serbian vodka and isn’t a rifle you’re likely to shoot a lot unless you have an iron shoulder. Off the bench, 5-shot groups averaged a bit over 1.5 inches. At $699, it is a really good value.

This rifle comes with a well-made laminate stock and a nice trigger that broke at just under 3 pounds. It performed well during our accuracy evaluation, and at $548, it isn’t a bad value.It’s chambered in the .17 WSM rimfire round, which spits out 20-grain bullets at 3,000 fps, making it the flattest-shooting rimfire on the market.

We found the operation of the rifle pretty rough. The bolt, which cocks the action as you close it, required a lot of effort to get into battery. This made running it rapidly a chore, which cost the gun points on its handling and ergonomics. 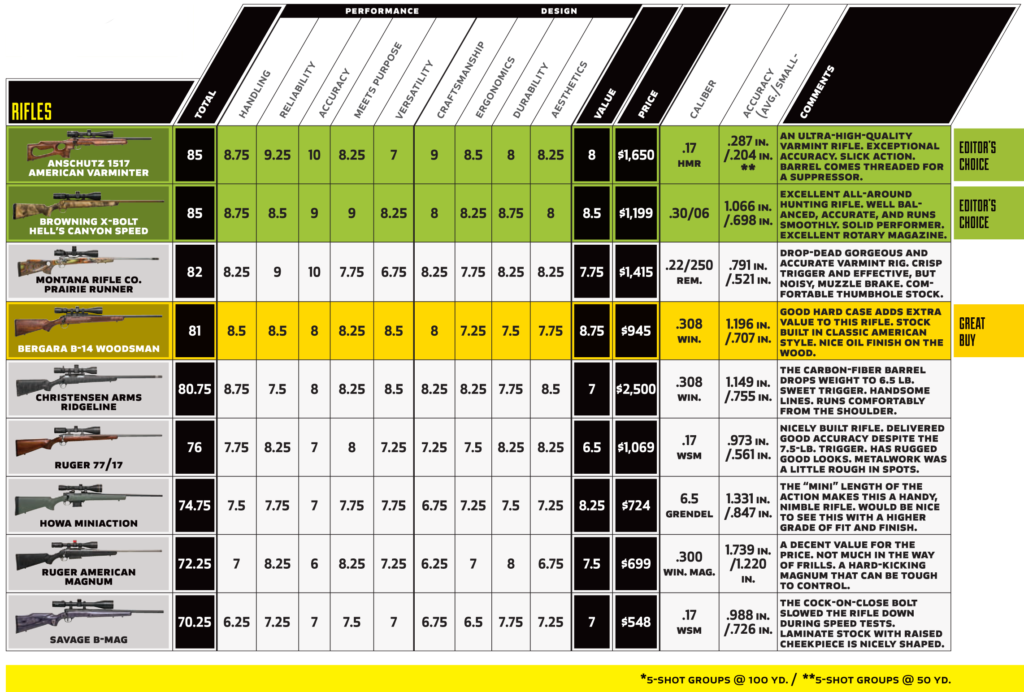 Special thanks to Camp Chef, GoPro, and Sportsman’s Paradise in Utah’s Cache Valley for making the Gun Test possible.