Why Do We Miss? 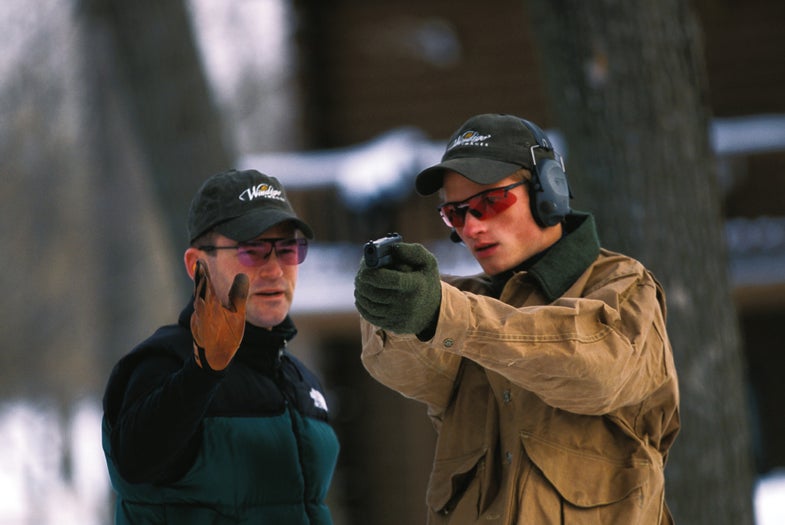 When I was a youngster, our rural community was watched over by a one-eyed constable who had a great reputation as a marksman. The cause of his celebrity was a historic incident in which he shot his revolver at a stray dog suspected of having rabies and hit it between the eyes. Depending on which eyewitness you believed, the distance of his remarkable shot could have been 100, 200 or 300 yards. The afflicted animal was also running, by the way. So even if only the lesser yardage is correct, it was still an incredible demonstration of keen-eyed marksmanship.

Another renowned incident in this dedicated peacekeeper’s history was his shoot-out with an escaped convict. Each emptied his revolver in the other’s direction, the result being the loss of the desperado’s thumb and his subsequent surrender to our hero. The scene of the gunfight was the inside of an otherwise empty one-car garage.

About the time of this legendary feat, I was becoming fascinated by firearms and their use and spent some time pondering how it was possible that of a dozen shots fired, only one had any effect. My doubts about the steely-nerved marksmanship exhibited in this sort of combat were further reinforced when I read an account of a shoot-out in a crowded Texas saloon a century earlier. Armed with what I suppose were six-shooters, the opposing deadeyes managed to hit every window and lamp, plugged the piano over 40 times and even sent the saloon cat to that big catnip patch in the sky. But there were no other casualties. This is what I call either a superb demonstration of gun safety or a world-class display of mass missing.

There are as many reasons for missing as there are shooters. Everyone seems to be gifted with his own unique genius for missing whatever target he sets his sights on. Yet when we filter out our individual variations, the real reasons for poor shooting become a manageable few.

Most notoriously, we miss with handguns, so that’s a good place to start our analysis. To convince yourself that you are, or can be, a first-rate pistol shot, simply take an unloaded gun in hand and point it (or just your finger) at a dime-sized spot on the wall from a distance of about 3 inches. You’ll notice that the movement of the gun or your finger is pretty well within the boundaries of the dime. But when you extend the range to, say, 50 feet at the shooting range and fire a live round, your chances of hitting a dime-sized target diminish tremendously. Why? Sight alignment.

To get a firmer grip (no pun intended) on this thing called sight alignment, let’s do some simple arithmetic. Say your pistol has a sight radius (the distance between the front and rear sights) of 5 inches. If the blade of the front sight is perfectly aligned in the notch of the rear sight, we can assume the shot will fly straight and true. But what if the front blade is misaligned by only a hundredth of an inch? With a 5-inch sight radius, that hundredth of an inch error is multiplied every 5 inches. So by the time your bullet travels 50 feet (600 inches), that seemingly tiny alignment error is magnified 120 times. At 50 yards, it’s a whopping 360 times! (A hundredth of an inch, by the way, is about the thickness of six pages of this magazine, which shows how quickly a tiny alignment error becomes a big miss.)

So how do we eliminate or at least reduce alignment error? The same way we get to Carnegie Hall: practice, practice, practice. This is why champion pistol shooters spend untold hours perfecting their sight alignment. For the rest of us there’s an easier solution.  Unless you’re into International or NRA-type pistol competitions, which require a one-hand hold, there’s no law that says you can’t use a two-handed hold. This is normally done by gripping the pistol in one hand and cupping it in the other. Go back to the dime spot on the wall and you’ll see how a two-handed hold improves both your steadiness and sight alignment.

However, unless you’re in your teens or 20s, there’s another problem with sight alignment. When we’re young, our eyes rapidly shift focus from rear sight to front sight, to the target and back again, so that all three seem to be in sharp focus. By our 30s, we begin to lose this ability to speed-focus. As a result, the sights or the targets begin to look blurry. Most of us instinctively look hardest at what we want to hit. This leads to misses because the sights get blurry and we can’t refine alignment. Thus, as we get older and can’t focus clearly on all three elements of the sight picture, the Golden Rule (for the Golden Age) is to concentrate your focus on the front sight. This goes for rifles with open sights as well as for handguns.

What if the sights are perfectly aligned and we continue to miss? That’s when we confront the other half of the twin evils of pistol shooting–trigger control. Champion pistol shooters who spend hundreds of hours perfecting sight alignment spend even more time developing a trigger finger that “thinks by itself” and fires the shot without disturbing the alignment.

While regular practice will help, one solution to this trigger-control dilemma is to have a handgun with a trigger pull that’s crisp. All else being equal, the heavier the trigger pull, the more likely it is you’ll miss. This is why paying a qualified gunsmith to do a decent trigger job on your handgun is one of the best investments you can make toward improving your accuracy.

The single biggest, but certainly not the only, reason for missing flying targets with a shotgun is incorrectly calculating the lead that is necessary for the shot charge to intercept the target.  Although diagrams and classroom-type instruction might convey the generalities of the lead necessary to hit targets flying at different speeds, we can only master the skill of angles and distances by doing it. This is why we learn wing-shooting best and quickest on a skeet field or by shooting sporting clays.

But even as we unravel the mysteries of lead, we find ourselves plagued by nuances of technique that contribute to our continued missing. Hang around almost any clay-target venue and the two phrases you’ll hear repeatedly are “wood on wood” and “you missed with your feet.” What do they mean?

“Wood on wood” is a not-too-polite reminder that a shooter missed his target because he raised his head off the comb of the stock, thereby losing alignment with the path of the target. This is a particularly frustrating reason for missing because it is done subconsciously; you probably won’t notice you’re doing it unless someone points it out. If it isn’t corrected, this flaw in technique becomes habitual, and the more you shoot, the more you will miss. In other words, you’re practicing how to miss.

Missing with your feet? Watch a good skeet shooter in action and you’ll notice that at every station he carefully places his feet, but he also positions them at different angles from station to station. This is because he knows at what point along the target’s path he will fire, and it is there that he wants his body’s position to be best balanced.

A good shot begins at your ankles. You can prove this to yourself simply by taking a relaxed stance and raising a shotgun to your shoulder and cheek in a normal shooting position. Next, without moving your feet, pivot your body to the left and then right as if swinging at a moving target. Notice how your body becomes increasingly off balance and awkward as you do this. The same thing is happening when you try to hit a fast-moving duck or clay target. If you get too far off balance, your swing slows down and the whole attempt degenerates into a miss.

A Word About Rifles

Ah, where to begin? From a technical standpoint it’s easy to blame rifle misses on the gun not being correctly sighted-in, or on bad range estimating. But since most deer are killed at less than 100 yards, most misses occur at similarly short distances. The usual suspects–range estimating and bad zeroes–are not the biggest perpetrators. So let’s put the blame where it belongs: on bad shooting, plain and simple.

Of course, bad shooting comes in many guises, from the novice deer hunter firing his new rifle for the first time to the wizened veteran of many hunts who blows his shot at the biggest buck he ever saw. The polite term for this type of bad shooting is “buck fever,” and we all get it from time to time. Buck fever has many symptoms, the most common being a sudden case of bad nerves that makes the hunter so shaky he can’t hold the sights on the target. With his cross-hairs skittering across the target like a grasshopper on a hot griddle, a hunter is more inclined to jerk the trigger, making a bad situation even worse and virtually guaranteeing a miss.

So what’s the antidote for buck fever? Since a large percentage of misses can be attributed to firing off-hand, we can shift the odds in our favor by becoming better off-hand marksmen.

The sharpest off-hand shots you’ll see in action are silhouette shooters, the best of whom will knock over five steel chickens in a row at 100 meters with a centerfire rifle. I’ve known several top silhouette shooters who took up the game just to improve their hunting skills. Not only is silhouette shooting lots of fun and wonderful off-hand practice, but it also helps you to control your nerves under pressure–the same kind of pressure that makes your heart pound and your spine tingle when you’re trying to settle the crosshairs on the trophy of a lifetime.

One more big reason people miss with rifles, pistols and shotguns is flinching–subconsciously shutting their eyes and jerking the trigger. Not just because of recoil, but because of painful muzzle blast. Good ear protection is one of the surest ways to cure bad shooting. And eye protection is  always a must.