Introducing A Child To A Deer Rifle

A how-to on introducing your child to his or her first deer rifle. 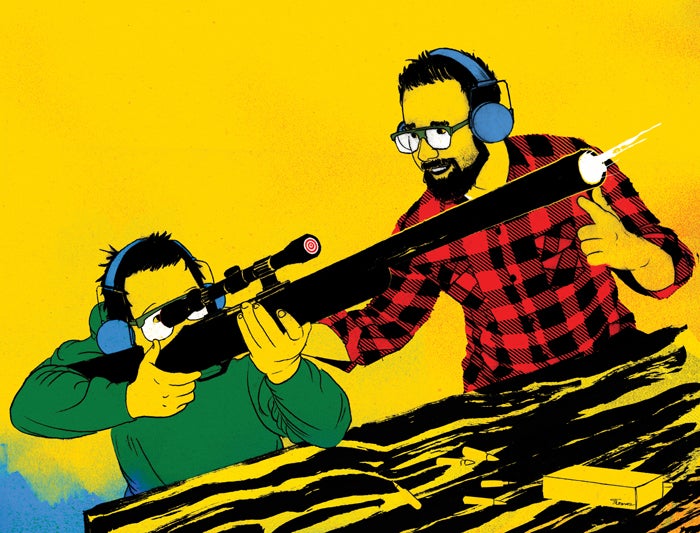 One of the most exciting moments in a young shooter’s development is getting ready for that first big-game hunt. This is the point at which a child graduates from air rifles and rimfires to high-power centerfire cartridges. It’s a big step–one that can be daunting for the teacher and shooter alike. A misstep here can create bad shooting habits, or worse, make for an unpleasant experience that sours the boy or girl on the whole business.

However, this need not be the case. With the right approach you can harness your child’s natural enthusiasm for shooting, and before long your biggest concern will be figuring out how to pay for all that ammunition your youngster is sending downrange.

Ingraining the basic firearms-safety rules is a must when preparing any new shooter, and something you likely did with your child before even thinking about having him or her shoot a big-game rifle. But it is always a good idea to review the rules before any shooting session. The child should know by heart to treat every firearm as though it was loaded, to keep the action open and unloaded and finger off the trigger until everyone is ready to shoot, to be sure of the target and what’s beyond, and always to keep the muzzle pointed in a safe direction.

Proper protective gear is another obvious, yet vital, component. Quality ear and eye protection is a must. Adequate ear protection also makes it less likely that a child will develop a flinch, which can happen due to the startling noise of the report. If you have your child shoot without a round in the chamber, you can quickly see whether he or she is flinching. If that’s the case, you should stop shooting for the day and the next time at the range have him double up on ear protection with ear plugs covered by muffs.

If you want to bore your child to tears, by all means have him or her punch holes in a standard bull’s-eye or “sighter”-style target. A preferable choice is a target that does something when shot, such as fall down, spin or, better yet, blow up. Balloons are the targets my kids love most. They are cheap and fun, though they do require a bit of cleanup afterward. Flake-off targets shaped like game animals are also good for teaching shot placement, and they leave a nice bright mark when shot.

You can make any of these cartridges gentler still by handloading with reduced loads, which is exactly what I did with my daughter’s .257 Roberts (see sidebar). Downloaded factory ammo is also available in common chamberings, such as .30/06, .308 and .30/30. Remington’s .30/30 Managed Recoil load, which launches a 125-grain bullet at 1,313 fps, is as tame as a kitten.

Everyone knows to start a child with iron sights before moving to scopes or red-dots, right? As one of my hunting companions recently put it, if they’ve mastered iron sights, they can shoot anything. By that same reasoning, you should teach children to play basketball by starting them from behind the three-point arc. Once they’ve mastered that, layups are a snap, right?

The flaw in such logic is obvious, yet the idea of starting with iron sights still has a firm hold among hunters.

When teaching a child any new skill, shooting included, the goal is to make it as easy as possible. This means using a scope or red-dot. Of course, scopes present their own difficulties for kids, particularly when it comes to figuring out the proper eye relief. The way around this is to use a scope with a low magnification setting (2X at the most) and a generous eye box. Even so, be patient. It can take children a long time to learn where to position their head on the stock, which is another reason a properly sized rifle with a shortened length of pull is a must. Red-dots, with their unlimited eye relief, are the easiest to use; just keep the targets close.

The actual shooting requires a balancing act between comfort and accuracy. The most accurate way to set up a rifle–off a bench with the rifle propped on bags–is the least comfortable because the felt recoil will be most acute. On the other hand, the most comfortable way to shoot–with the rifle resting on shooting sticks and the shooter standing or kneeling–makes the rifle more difficult to control and less accurate.

Starting with the rifle in a rest like the Caldwell Lead-Sled, which reduces the movement of a recoiling firearm to nearly nothing, makes a lot of sense. The dimensions of a rest like that can make it really hard for smaller children to position themselves when seated at a bench. With my daughter, we figured out a way for her to stand next to the bench, with the rifle in the sled, that allows her to shoot from a nearly natural off-hand stance.

Another advantage of a solid rest is that it allows you to pre-position the rifle’s point of impact so that the child doesn’t have to do much else other than peer through the optic as he or she pulls the trigger.

No matter how you start, it’s best to practice dry-firing the rifle several times before putting a live round in the chamber, having the child call the shot each time the trigger breaks.

Once the shooting starts, watch for any signs of fatigue or nervousness. In the event of either, it’s time to take a break, perhaps for the rest of the day. It’s better to divide the introduction into several short sessions than to try to cram it all into one day.

If that does happen, don’t panic. Stop shooting and spend some time talking with your child before going back to dry-firing. Then stop there. Don’t put another round downrange that day.

Be sure to celebrate each shot, reinforcing what your child did right rather than what wasn’t perfect about his or her form. Keep those targets in close and whoop it up as they tip over, blow up or spin around.

Factory loads for the .257 Roberts are anything but stout, but even that level of recoil can be tough on a new shooter. Creating ultra-mild handloads is not difficult, though. Hodgdon’s H4895 is ideal for this task. Any cartridge that can use this powder can safely be started with a charge that is 60 percent of maximum.

In the case of the .257 Roberts, that translated to 23 grains of H4895 behind 100-grain Barnes TSX bullets. Accuracy is more than acceptable for practice, and when it is time to hunt you can up the charge to 27 grains, which drives the bullet at 2,076 fps. At these velocities, it is still soft to shoot, yet is potent enough for deer out to 100 yards.

What to look for in a youth gun

This rifle, built for my 9-year-old daughter, Ava, by Charlie Sisk on a Remington 700 action incorporates numerous features that make it well suited to a chlid. With a 20-inch barrel and light McMillan stock (1) it weighs only 7 pounds scoped. At its lowest setting, the 2-7×33 Leupold (2) gives lots of eye relief, provides a wide field of view and lessens aiming anxiety by minimizing perceived wobble. Chambered in the soft-shooting .257 Roberts (3), it has a detachable magazine (4) that lets the parent control the ammunition until it is time to shoot. A quality trigger (5), in this case a Jewell, helps encourage better marksmanship and shooting skills. The thinned-down grip (6) is easier for a child’s smaller hand to grasp, providing better control over the rifle in general and the trigger pull. The shortened length of pull (12.25 in.) (7) allows for proper form and makes the rifle more comfortable during recoil. To learn more about Charlie Sisk’s rifles, go to siskguns.com.