Want to fill your elk tag? Steer clear of these mistakes. 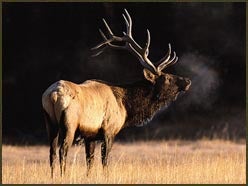 In all the Western states, only 20 percent of hunters get an elk every year. That seems to be a rather low success rate, given the boom in elk populations over the last few decades. (In 1920, there were about 35,000 elk in North America; today it is estimated there are more than 800,000.) With all those animals roaming the West, you’d think they’d be far easier to locate and more hunters would score. There’s a simple explanation as to why that isn’t so: Elk are just being elk, and no matter how many of them there are, they’ll always be a challenge.

Any time you have an animal that lives in mountain areas, much of which is unroaded backcountry, you have an elusive quarry. Not many hunters are willing to go the extra mile-literally-to hunt elk. In some cases that’s good thinking, since it might be almost impossible for a hunter to transport the carcass out of the woods.

Penetrate the Elk Woods
No matter how you slice it, hunting elk in their typical mountain habitat is not easy. There are exceptions, of course, such as elk that live in easily accessible lowland areas (notably deserts or arid juniper forests) or elk that live on private ranches where they receive less pressure. Then, too, drawing a tag in a limited-entry unit offers good odds, again because there are fewer hunters.

But what about the elk that live on national forest land, where the majority of us hunt? These are the toughest to come by. More than once I’ve hunted for a week in prime elk country and never seen an animal. The elk were there, but they consistently gave me the slip in the heavy woods that we call “black” timber. Most of those failed hunts were in steep mountains that had few or no meadows or openings, and the rut was long over, which eliminated the option of calling. Either you met up with an elk in the timber or you went home with an unpunched tag.

I know some elk hunters who almost always get their bull each year. Some use horses and some go on foot. It’s the latter who have the toughest job, because a horse can take you well off the road in short order without much physical effort. Show me a person who gets at least three elk every five years by hiking, and I’ll show you someone who never sees the pickup truck or camp in the light of day. That hunter will also get as far away from roads as possible, searching out every possible area that might offer security to animals. Several studies have confirmed that elk will typically hide as far from human traffic areas as possible. It’s also true that the vast majority of hunters don’t get much more than a half-mile from the road.

There are three reasons for this: 1) They’re lazy, out of shape or otherwise physically unable to do so; 2) they’re afraid of getting lost; or 3) they don’t have the means of getting an elk out of the woods from afar. All three problems have solutions, but they will take some work on your part.

If you are indeed capable of getting in shape, then do so. If hunting in big woods makes you nervous, invest in a GPS unit-or at least use a map and compass. If you don’t think you can get an elk out of the woods, consider hiring a local packer to do it for you.

Understand Elk Behavior
Many people don’t understand elk vocalization and have no clue about how to use bull and cow calls. Calling with a bugle is effective only during the rut, which normally occurs in September and early October, but a cow call can be effective just about anytime.

Migration patterns are also commonly misunderstood. Except for those animals that live in arid areas, most elk travel long distances from summer to winter range. In northwestern Wyoming, where I live, you can’t find an elk within two miles of the highway before snow falls deep in the high country.

Daily travel is also misunderstood. Elk usually feed all night long, from late in the afternoon to very early inn the morning. This is standard behavior, even in places where there is no hunting. Put hunters into the equation, however, and elk will alter their habits. They may drift into the timber in the hazy gray light long before sunrise and legal shooting time. Astute hunters will likewise be at a high vantage point in the dark, long before shooting light, or at least position themselves near a meadow, clear-cut or old burn where they’ve discovered fresh elk tracks. If you don’t catch elk when they’re in their open feeding areas, you’ve blown the day’s hunt-until late afternoon, when elk will again move from their bedding areas back to foraging places. Your only choice during the day is to get in the timber and hope to locate an elk. This is the toughest hunting of all. The quarry will likely be in heavy cover, where it’s virtually impossible to sneak up on bedded animals.

Wait Until Dark
One of the biggest mistakes a hunter can make is to watch a feeding spot all day. I can predict what will happen-nothing. Elk won’t head for those areas until night is coming on. And therein lies another problem. Many hunters are so eager to get out of the woods before dark that they miss those last few minutes of shooting light when elk are on the move. Many of my elk were taken when there was barely five minutes of shooting light left. There are a few problems with that scenario.

First, in the waning light, you might have trouble finding a mortally hit elk that has run off into the timber. Second, you’ll no doubt be field-dressing your elk in the dark. Third, you must find your way out of the woods in the dark. Many elk hunters are wary of these situations; the result is that they are out of the woods well before the prime period.

A successful elk hunt is as demanding as any hunt you’ve ever been on-especially if it’s on public land. You can either meet it and up your odds for success, or ignore it and likely go home without an elk. It happens to 80 percent of us every year.