11 Mistakes Elk Hunters Make, and How to Avoid Them 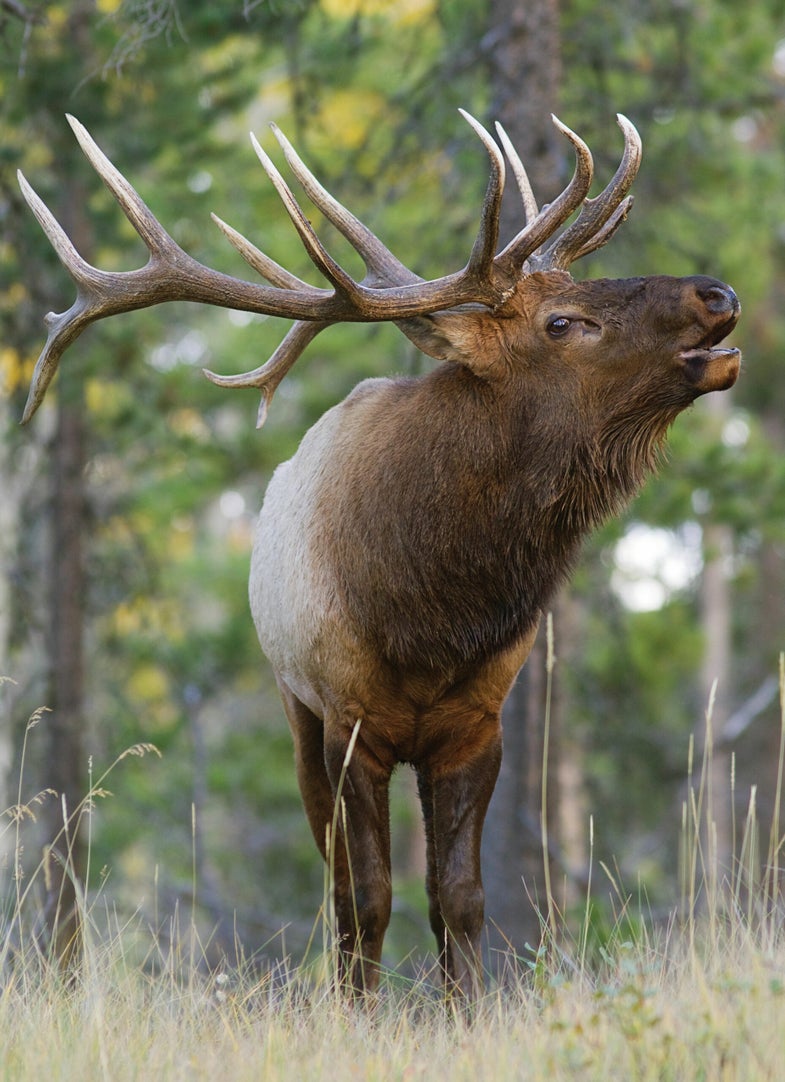 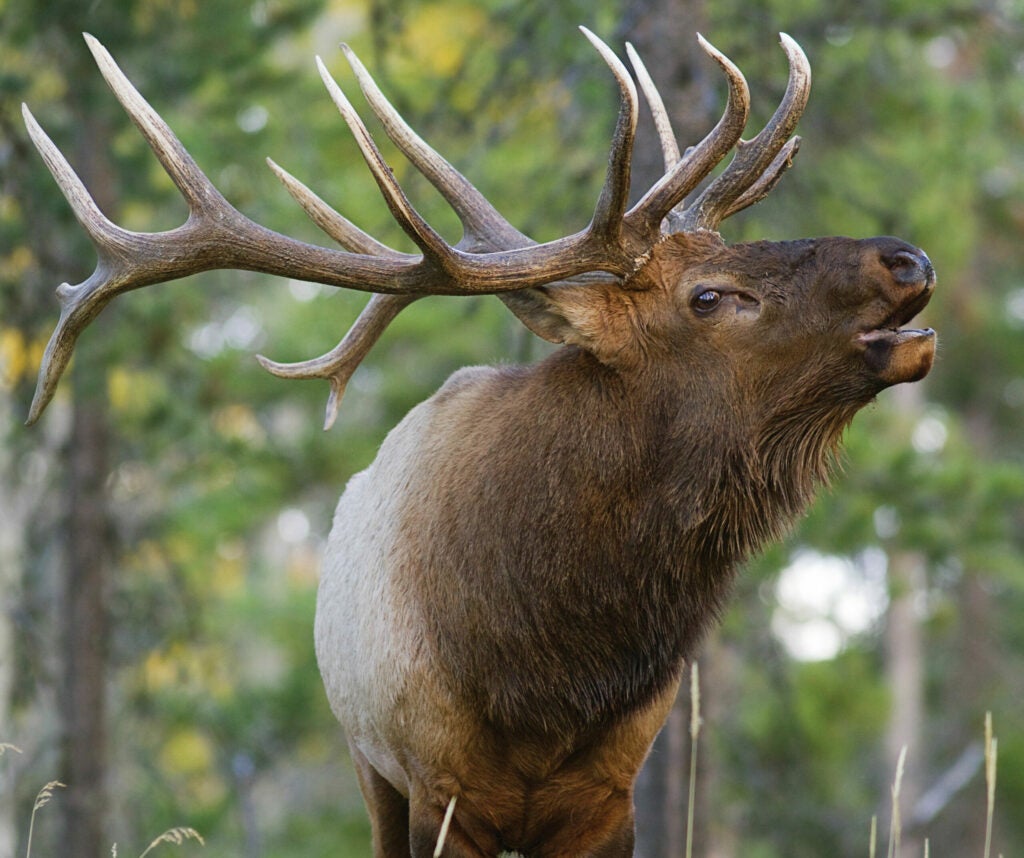 This 7×7 monster might slip away if he hears a challenging bugle by a hunter.

If you’ve killed a mature bull elk, you’re among a fortunate few. In Montana, bulls at least seven years old make up one percent of the herd. Access to them is limited by a draw, and in top units the odds of pulling a tag are less than one percent.

The good news: You needn’t draw into a trophy unit or kill a record-book bull to succeed as an elk hunter. But you must do a few things right.

When I shot my first bull 40 years ago, one in seven hunters filled their tags. I suspect that’s still a fair average estimate across the West. However, private-land outfitters and controlled-access hunts that require years of preference points now skew those figures. Opportunities to shoot elk, on the other hand, are more common these days.

As hunters confess blunders less eagerly than they recount kills, it’s hard to know how many elk would fall if hunters made no mistakes. Perhaps the elk keep track.

1. Mistake: Chief among failings, according to outfitters, is a hunter’s sorry state of physical readiness. Elk country isn’t all steep, high, rocky, and strewn with jackstraw timber, but that’s often where hunted elk go. Saying “I’m just a little slow” doesn’t negate the fact that elk are not slow. They live in big places and cover distance very quickly.

▶ Lesson: At a minimum, walk or jog for several weeks prior to your hunt to get your legs and lungs in the best shape possible.

2. Mistake: Many riflemen shoot poorly without a bench. Over the years, I’ve muffed several shots that seemed at the time to be too easy to miss. As a guide, I’ve seen clients drill golf ball–size groups from a rest only to miss beach ball–size vitals with hasty pokes at elk.

▶ Lesson: Practice regularly with a paper bull’s-eye from sitting, kneeling, and off-hand positions. A .22 makes practice affordable and more comfortable. Determine a “90 percent kill” sight picture, and fire only when you have acquired it.

3. Mistake: Long-range rifles often handicap hunters. Once, before I could stop him, a client crippled a far-off elk when we could have gotten closer. Another fellow who’d zeroed his rifle at 400 yards overshot a bull at 200. Heavy rifles also slow your step, tire you in the hills, and keep you from wanting to venture into the best elk cover.

▶ Lesson: Limit your rifle weight to 9 pounds. Zero at 200 yards; hold center to 250. But most important, always get as close as you can.

4. Mistake: While I’m fond of iron sights, scopes are faster, with elk and reticle appearing in the same plane. But you lose target-acquisition speed, brightness, and field of view when you crank up the magnification. I’ve killed elk at 300 yards with 3X magnification. High power once cost a client an easy shot when he couldn’t find two bulls in his scope as they trotted by at 60 paces.

▶ Lesson: Keep your scope at 3X or 4X. You’ll have time to dial up for long shots. 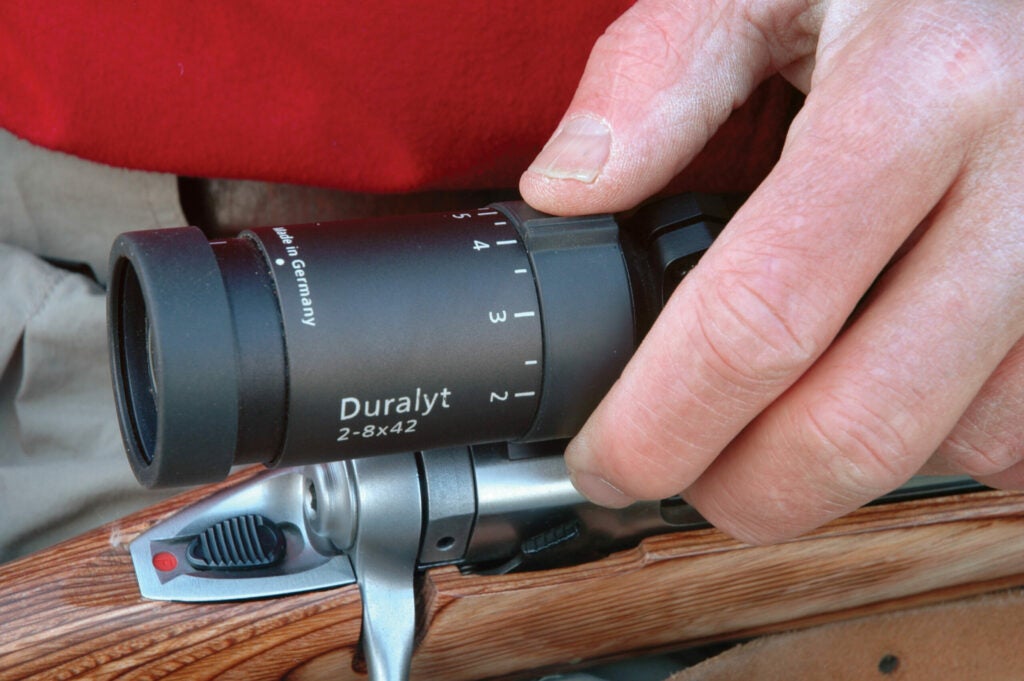 As fond as we are of iron sights, scopes are faster.

5. Mistake: Often on elk hunts, a good option can scuttle a better, easier one. Topping a ridge long ago, I glassed across a draw at meadows and second-growth that screamed elk. A few minutes later, as I glassed the slope, a twig snapped close by. The bull that had stood there surely wondered why I didn’t fire before it bolted.

▶ Lesson: Look near before you look far.

6. Mistake: Elk hear well but dismiss some noises. Once, I sneaked into an aspen copse on an elk trail, pacing my steps as an elk might, and I passed a bedded cow at 4 yards to kill a bull. Padding along other tracks, I’ve surprised bulls that were bedded just feet away. Some were so astonished that they stood for a shot. But hunters who talk loudly or let their gear clack and rattle as they walk send elk packing.

▶ Lesson: Move like an elk where elk move. If you must communicate, whisper.

7. Mistake: The wilderness pack trip has come to define “pure” elk hunting. But odds at a shot can improve on forest fringe near agriculture, where elk densities run higher, especially in late seasons. Success in Idaho’s Frank Church, Montana’s Bob Marshall, and Oregon’s Eagle Cap wildernesses hovers below 15 percent. While I’ve killed elk in all of them, they yield elk reluctantly.

8. Mistake: Dreams of outsize bulls fuel elk fever. But assuming you can always kill a lesser elk later in the hunt if a big one doesn’t show early on is perilous thinking. One client passed up several fine bulls looking for a brute we knew was in the area. I admired his discipline, but he went home without firing a shot.

▶ Lesson: Have a realistic plan. As an outfitter pal advises his clients, “Shoot the elk you’d take the last day as soon as you see it.”

9. Mistake: Crusted snow and bare ground can make for noisy tracking and spooked elk. But as I hunted through crust one day, I caught up with a bull, thanks to wind, topography, and knowing when to leave the track. I moved wide around the herd through cover, and my chance came as I paused at the cover’s edge. Across a meadow, the bull had stopped to check his backtrail.

▶ Lesson: Tracking can produce but always assume that the elk are stopping frequently and looking back.

10. Mistake: While taking a friend on a hunt, we passed a thicket in the dark and heard elk. He wanted to stop, but I urged him on. We ignored the animals and kept climbing. At dawn, in some Douglas fir, the flick of an ear caught my eye. The bull fell to his .300.

▶ Lesson: Hiking past elk early puts you where elk don’t expect hunters to be. Don’t stop in the dark to listen for elk. They’ll spook. Hike purposefully; the elk will let you by, and you’ll shoot one later.

11. Mistake: Many years ago, when bugling to attract bulls was still a novelty, a pal insisted on shadowing a herd bound for shade at dawn. The bull thought him a pest and left. That afternoon I probed the timber silently toward a sometimes-vocal elk. At last I glimpsed him long enough for a shot.

▶ Lesson: Rutting elk sometimes respond to a bugle by moving away. Still-hunt toward a noisy bull, and be aware that he might lie beyond alert cows.