Is CWD the scourge that will end deer hunting as we know it? Or merely a manageable nuisance? 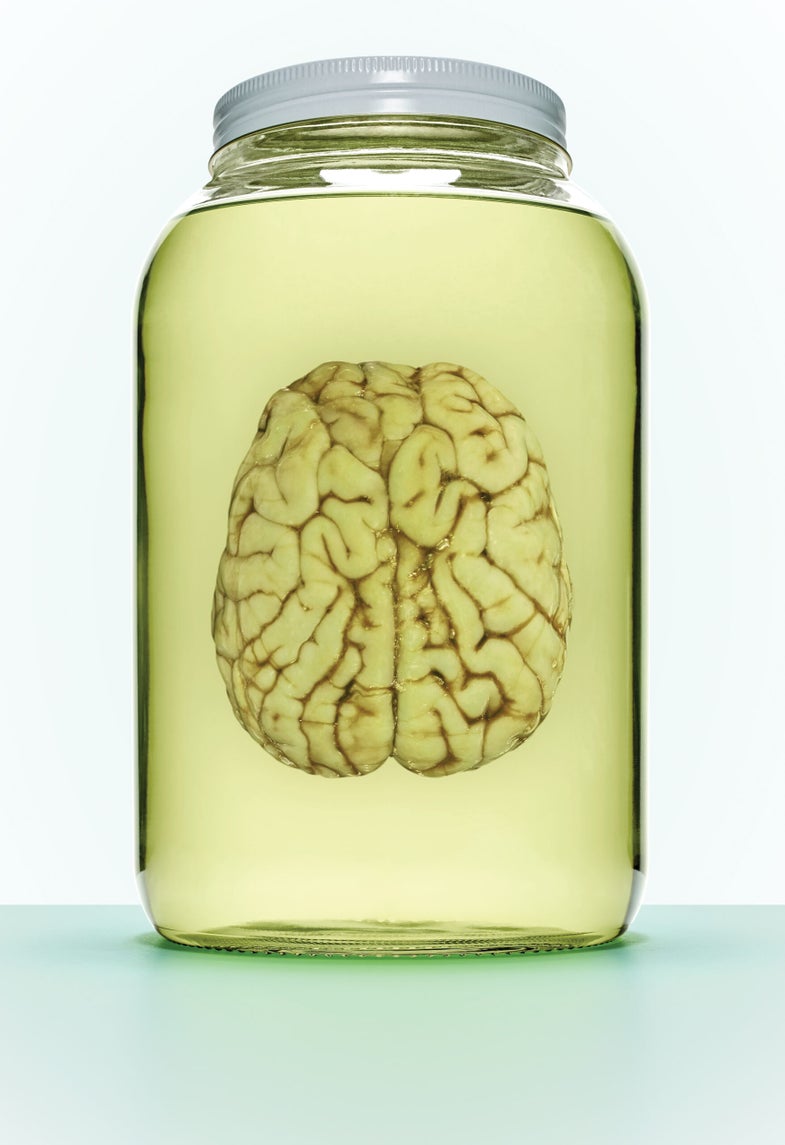 The theories behind the origins of CWD are varied and controversial. Stuart Fisher
SHARE

Five decades have passed since chronic wasting disease reared its ugly, mysterious head. For the first forty years, the disease seemed to be little more than an oddity, a strange affliction that affected a handful of mule deer, elk, and whitetails out West. It was an annoyance, not an epidemic. Then, in 2002, it was discovered in wild whitetails in Wisconsin, and things got real. Suddenly, CWD acquired a new level of focus and potential devastation that has taken on an outsize role among those who value whitetails.

In 1981, the first case of CWD in the wild was documented in an elk in Colorado. By 2000, it had been discovered in captive herds in Nebraska and Oklahoma as well as in wild populations in Saskatchewan. It has also spread east of the Mississippi, and the recent discovery of CWD in wild reindeer in Norway means it’s now found on two continents.

We also know that, so far, it has not proven to be transmissible to humans.

The theories behind the origins of CWD are varied and controversial. And they are just that—theories.

“The truth is, we don’t know where it came from,” says Dr. James Kroll, a Texas-based researcher who was hired by the state of Wisconsin to review its deer management program in the wake of CWD. “It may have been a mutated version of scrapie that crossed species. It may have occurred spontaneously. It could have been here all along, and when we started looking for it, we started finding it. We don’t know—and that’s a key point to understand. There are a lot of theories, a lot of finger-pointing, but none of it is documented fact based in science.”

This much we do know: The disease was first discovered and documented by researchers from Colorado State University and Colorado’s Division of Wildlife at a captive cervid research facility near Fort Collins, where studies were done on deer as well as sheep. A neurological disease, CWD is in the same family as bovine spongiform encephalopathy (mad cow disease) and Creutzfeldt-Jakob disease (which affects humans) and scrapie (which affects sheep).

The fact that deer and sheep were both present and experimented upon in the Colorado facility and that CWD is a transmissible prion disease sharing somewhat similar characteristics to scrapie has led to obvious questions: Was CWD somehow “created” by researchers in that Colorado lab? Or is CWD the result of a mutated version of scrapie that passed between deer and sheep in the facility?

Where it truly originated, to be frank, is likely irrelevant because CWD is an acronym that’s now very much a part of the deer hunter’s vocabulary. It was the Wisconsin discovery in 2002 that put it there. Wisconsin’s response was as swift as it was unsettling. The state created an eradication zone of roughly 287 square miles with a simple, single goal: Kill every deer within the zone in an effort to contain the disease. And it was, by all accounts, a spectacular failure.

“That was the first of many knee-jerk reactions that wasn’t based in science, that wasn’t really approached in a manner that made sound management sense,” says Kroll. “The impact it had on Wisconsin’s deer and its deer hunters was enormous. And it didn’t have to happen.”

Following the discovery of CWD in Wisconsin, it was feared that the disease would lead to a decline in deer numbers and a drop in the number of deer hunters chasing whitetails in Wisconsin. Both proved to be true. By 2009, the number of gun hunters had dipped to just under 623,000, compared to nearly 645,000 in 2005. By 2009, 39 deer were killed per 100 licensed hunters, compared to 56 deer per 100 hunters in 2005.

But, according to Kroll, it wasn’t CWD that caused the declines. Rather, they were the result of an unnecessarily aggressive response to CWD.

Currently, Wisconsin has the nation’s highest number of confirmed CWD cases in wild deer (more than 3,000 since 2002). Following Kroll’s work there, the state seems to have all but abandoned its aggressive efforts to eliminate the disease and, according to data from the Wisconsin DNR, CWD infection rates are climbing. Or are they?

In the spring of 2016, the Wisconsin DNR released data showing that the overall infection rate of CWD had climbed to 9.4 percent, the highest since monitoring began. It’s a figure that Kroll believes to be incorrect.

“I’ve looked at that data and it does not show a statewide prevalence rate of 9 percent. It does show how misguided people are with their facts about CWD,” he says.

Kroll released a report outlining how the 9.4 percent prevalence rate being cited is both misleading and wrong, explaining it is the result of dividing the number of positive results by the number of deer tested. The bulk of the deer tested were from the CWD zone, thus skewing the data and generating a statewide prevalence rate much higher than is likely real.

“Does anyone really think if we tested 100 deer across the state, we’d find 9 to have CWD? That’s just not the case, yet that’s what’s being reported and it’s simply not correct,” he says.

THE THREAT IS REAL

While some researchers, like Kroll, believe CWD is not the catastrophe it’s been portrayed as being, others think it truly does have the potential to greatly impact the future of deer and deer hunting, and they have urged for stronger regulations against the relocation of cervids as well as tighter regulation of game farms.

“All you have to do is look at the history. Look at the path the disease has taken and it seems pretty clear that captive cervids have likely played a big role in the spread of this disease,” says Russ Mason, wildlife division chief for the Michigan Department of Natural Resources. “We don’t know exactly where it came from, aside from the fact that it was first documented in a captive facility. And we know that when you have deer and elk being moved across state lines, you’re asking for trouble. Once it’s found in captive deer, it seems to show up soon after in wild populations.”

Mason made that statement in an interview in 2014—before Michigan had any confirmed cases of CWD in wild whitetails. Up until that time, the state’s only CWD-positive deer dated from 2008, from a captive facility in Kent County. In 2015, a wild deer tested positive for CWD.

“There is so much misinformation regarding CWD that it’s disturbing. Dangerous. CWD did not come from a game farm. It came out of a research facility run by a state game agency. That distinction needs to be made and it never is,” says Kroll. “The does that produced the fawns used in the facility were returned to the wild. Is that where the disease started? That wasn’t a deer breeder. It was a state research facility. Yet the blame always falls on the privately owned breeding facilities. That doesn’t make any sense to me,” says Kroll, who, it should be noted, has worked for game breeders in the past. “We have CWD in West Texas. There’s not a breeding facility in that part of the state. So where did it come from?”

Mason, however, isn’t buying it.

“Look at a map. You’ll see a pretty interesting pattern that shows areas with outbreaks of CWD in the wild and outbreaks in captive facilities,” he says. “If we want to stop the spread of CWD, then we need to think about how we move deer and elk like cattle.” That’s a position shared by Dr. Grant Woods, a respected biologist based in Missouri.

“According to disease scientists, the best method to limit CWD’s spread is to stop transporting the causative agents,” he says. “This means we hunters need to debone meat from deer and elk harvested in areas where CWD has been found, and only transport the meat, pelt, and antlers. Do not transport the brain and major parts of the nervous system, which is where most prions occur.”

“We also need to stop transporting live deer and elk because there is no practical test that can accurately confirm if they have CWD. Deer or elk with CWD shed the causative agent in their saliva, feces, urine, etc., and transporting them could spread CWD to areas with herds that are currently CWD-free.”

When CWD reached high-density deer states like Illinois and Michigan, it was feared the disease would spread more quickly there than in low-density areas. So far, it hasn’t.

Through June 2016, Illinois has tested nearly 100,000 whitetails for CWD, with 670 testing positive. The disease had been confirmed in 16 of 102 counties. Overall, the prevalence rate in all confirmed areas has remained stable or increased slightly at just more than one percent over seven years.

To date, Michigan has tested more than 7,300 deer and confirmed eight CWD-positive results. Of those, three came from the immediate area in which the disease was first discovered in the state and involved whitetails that were related.

What will the long-term impacts of CWD be? In September 2016, the scientific journal PLOS ONE published research from a study led by recent University of Wyoming Ph.D. graduate David Edmunds and under the direction of associate professor Todd Cornish. They found that during the study period (2003–2010), whitetail populations in areas of Wyoming (where the disease has been present for decades) with high prevalence rates of CWD declined annually by 10 percent. If such declines continue, localized extinction will occur in less than 50 years.

“The decline was caused directly by CWD lowering annual survival of female deer, which have the biggest impact on population growth rates,” Edmunds said in a release from the university. “This was because CWD-positive deer died both directly from the disease and were more likely to be killed by hunters than CWD-negative deer.”

Prevalence rates in the Wyoming study area were as high as 30 to 50 percent. Midwest hunters should take note. In Wisconsin, some townships have reported prevalence rates higher than 20 percent. If the Wyoming research is any indication, those regions could see localized extinction of whitetail populations in areas of the greatest prevalence.

There is some glimmer of positive news, however: In 2015, a team of researchers at New York University had a measure of success with a vaccine to prevent CWD in deer and elk, according to a paper published in the medical journal Vaccine.

So where does that leave us? Right back where we started some 50 years ago. Chronic wasting disease is here. We don’t know where it came from. We don’t know how to eliminate it. And we don’t really know what the long-term impact will be.

“CWD is a very deceptive disease. Most deer hunters have witnessed an outbreak of epizootic hemorrhagic disease (EHD), which often results in a rapid and obvious die-off. However, many deer that have been infected with EHD don’t die, and populations are known to rebound rapidly after an outbreak,” Woods says. “CWD is much different. It’s 100 percent fatal. Even worse, once the causative agent is in the soil, there’s currently no way to remove it. Unless something changes, CWD will likely be a major factor—if not the major factor—in deer populations and deer herd management for decades to come.”