A 400-class bull elk is about as rare as a 7-foot man: Genetically speaking, most bulls simply won’t grow antlers... 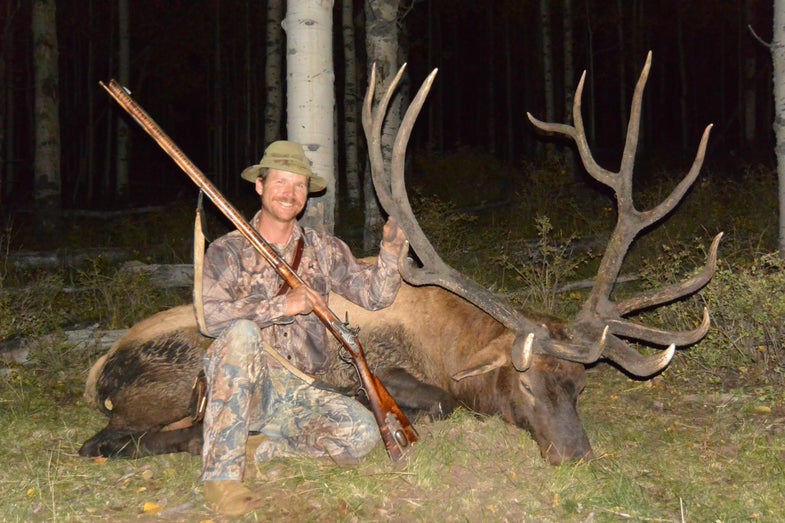 A 400-class bull elk is about as rare as a 7-foot man: Genetically speaking, most bulls simply won’t grow antlers that big. Last year was a banner year for antler growth across much of the West, with great feeding conditions, three consecutive mild winters, and other factors that allowed elk and deer to achieve their best potential growth.

I was among the few fortunate hunters who had an unusually prime elk tag for 2014. Seventeen years of applying finally paid off, and I drew a limited-entry trophy bull elk hunt for Utah’s muzzleloader season.

My chosen firearm was a beautiful handmade Flintlock rifle, crafted by my friend Steve Baxter of Tennessee. Steve is a legend in his own right, known across the traditional muzzleloading world for his fantastic skill with a flintlock.

The rifle sports a 42-inch .54 caliber barrel, iron sights, and a hand tuned Siler flintlock. It shoots just under two inch groups at 100 yards when stoked with 120 grains of FFFg Goex black powder, a linen patch, and a 235 grain hand cast round ball. Pretty fine accuracy for a “flinchlock.”

The evening of the third day of my hunt found me deep in an aspen thicket. Bulls were bugling hard and chasing one another and their cows. Finally, the herd bull showed himself. At 65 yards my flintlock sent smoke and fire into the dusk and a round ball into the bull’s vitals. He traveled about 30 yards and crashed.

This hunt and the bull I harvested with a flintlock rifle are the culmination of 25 years of living, hunting, and guiding in the woods each fall. The bull green gross scores 404 2/8. He’s a dream come true.

Click here to read about the author’s velvet muley buck taken with a longbow, also in 2014.