This old .410 has a legacy of resilience and utility 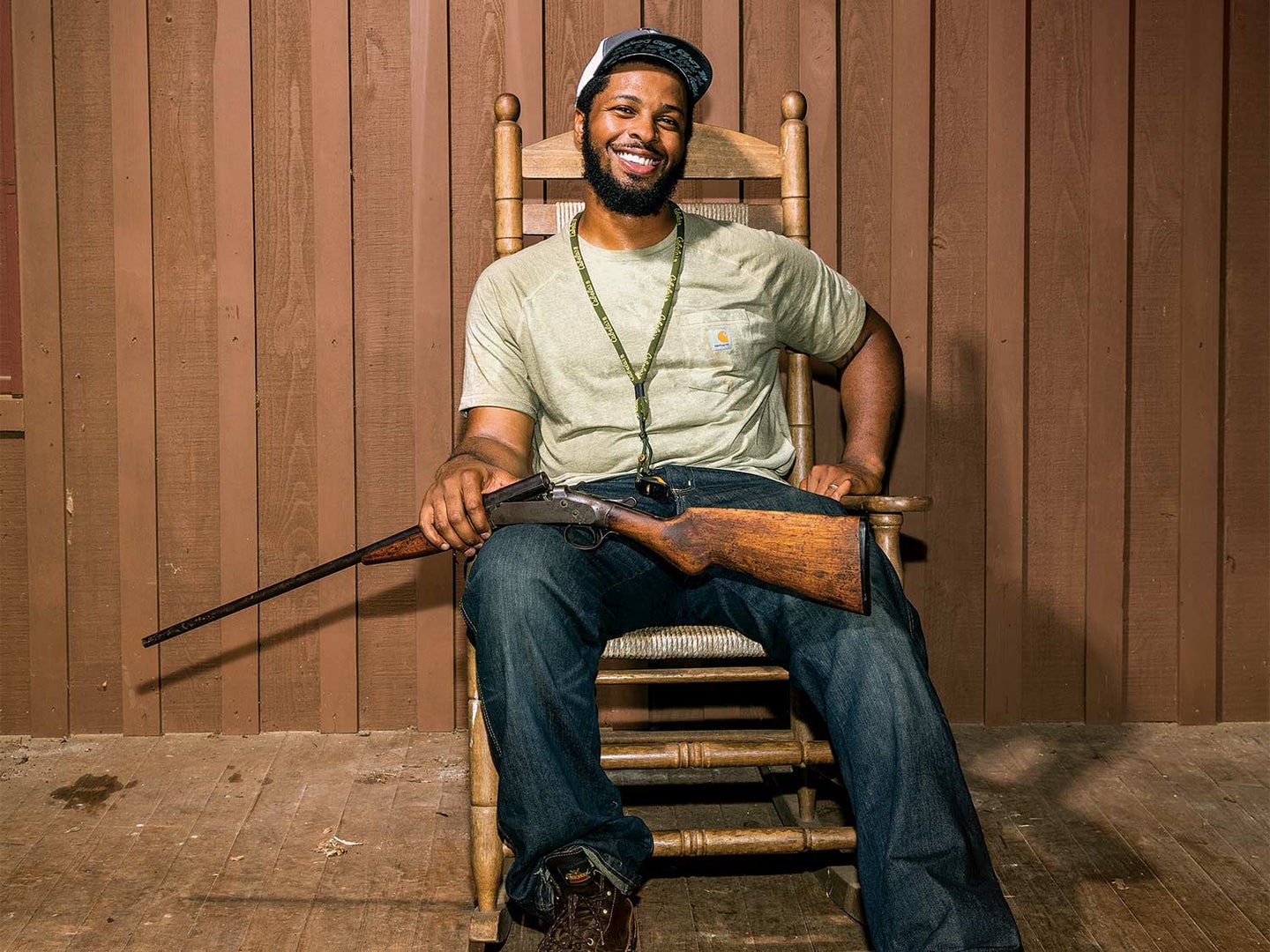 The author with his granddad’s restored .410 shotgun. Andrew Hetherington
SHARE

There’s a .410 single-barrel shotgun that sits in my closet most of the year. The gun has a tendency to choose corners, and has done so for the last century. When I was in high school, it sat in the corner of my ­granddaddy’s office. And I would ­pester him about it: Where had it come from? He told me that it had belonged to his stepfather—Mr. Parker, as he referred to him. My grandfather acquired the gun after my great-grandmother passed away. He wouldn’t get rid of it, but he never did anything with it either. For years it sat there, rusted, corroded, and unemployed.

Even though the gun came from a Mr. Parker, it was nothing like the Parker shotguns that so many folks romanticize in upland bird hunting lore. In the early 20th century, most Black folks weren’t bird hunting for sport. They were trapping game, mostly for two reasons: They likely couldn’t afford a gun, and trapping was the best way to guarantee that the meat could be sold in the best possible condition. High-end shotguns were unaffordable for almost any Black man. They were nothing more than a dream.

After Emancipation, Black Codes had been put into place to severely constrain the mobility and liberty of African Americans. Under these codes, guns were virtually inaccessible to Blacks, which meant they could not hunt game. And even after the codes morphed into Jim Crow laws, some Southern states banned the cheapest guns or implemented high taxes on firearms to prevent Blacks from purchasing them. Black folks had to find alternative methods of hunting and ­providing for themselves, or they’d be forced back into servitude.

As I learned our history, I was struck by the ­notion that maybe this shotgun was my ancestor’s attempt at establishing some form of freedom. It didn’t matter how used the gun was. For us, having a good hunting dog and an old pot-metal shotgun was liberation at its best.

I never got to meet Mr. Parker, but I can guess that his old piece had multiple uses, including home defense and hunting everything from quail to raccoons. During the days after Emancipation, hunting and trapping often grew boys into men, and their efforts enabled African American families to live off the bounty of public lands.

By the time I was in college, it was as if the shotgun were calling out to me, inviting me to learn more. So one day, I decided to do some ­research. After scouring the internet, the gun’s serial number written on a sticky note beside me, I finally happened upon a website that provided information on old Iver-Johnson Excel single-shot shotguns. Granddaddy’s gun was the Champion model, and I found out that the gun was made most likely in 1919, but surely between 1919 and 1930.

I asked my granddad if I could have the gun, and he responded with a challenge of sorts, which is very true to his nature. My granddad has always had a way of pushing me (to help me grow, he says), but he usually presents these challenges in the most sarcastic way. He grew up “on the wrong side of the train tracks” down in Columbus, ­Georgia, and his way of showing me love is to be tough on me. Some days, he’d teach me patience and diligence while we gardened together; other days he’d have me out pressure washing the siding, or making sure the lawn was cut both horizontally and vertically so that no unsightly patterns were left. He would review my work, and to this day I still have no idea how he’d manage to spot the single blade of grass I had missed. My granddaddy is the type of man who makes sure you heed what he says, and he’d usually deliver his messages in the form of a passive suggestion, coated in the vernacular of Columbus and old Atlanta.

Soon enough, I found a gunsmith in Fayetteville, Georgia—a K-9 police officer who repaired and restored guns when he wasn’t on duty. His strong Belgian Malinois was sitting quietly in the back when I entered his garage shop and handed him my granddad’s old shotgun. The gunsmith slowly and carefully examined the old rusted steel and scarred wood. He handled it as if it were a fine shotgun or a brand-new hunting rifle. After a few silent moments, he looked up at me and said he would get the gun back into working shape.

And sure enough, within a couple of weeks, he delivered a rebuilt action and very clean barrel in exchange for $85. I’d officially spent more on repairs than the gun was worth. I was 24 then, and that was a lot of money to me. But it was well worth it to bring a piece of family history back to life.

When I walked into my granddad’s backyard with the restored gun, the look on his face said it all. The shotgun was now mine.

From there, I started learning how to hunt. Hunting was never a formalized practice in my family, but shooting was. I’d always known my way around firearms, thanks to my granddaddy. But up to that point, the only “hunting” I’d done was as a kid, unleashing holy hell on backyard squirrels with a BB gun. I can’t explain why, but back then I had it out for squirrels.

As an adult, I felt I had a chance to undo the misdeeds of my childhood. This time, I would become an intentional hunter, respectful of the game I chased. And with my gun rebuilt, I would add a new chapter to the history of an old firearm.

So I started wandering the woods with my dog, a treeing walker coonhound named Saint. I specifically remember that dog’s superior intelligence, lanky legs, and graceful gait. I also remember the time he swiped a freshly baked breakfast casserole off the counter—one of Saint’s many ­exploits that made his name so ironic. I’m not sure that he and I were ever friends, though. He was a dog, and I was the guy he lived with. In truth, I probably could have made a better coon dog out of the neighbor’s cat.

Nevertheless, I would take Saint out to the closest WMA and hunt squirrels with him and the old .410. The dog never actually treed any squirrels. He would run around and play in the leaves while I looked for game. And when I did get within shotgun range of a squirrel, that old gun would knock the hell out of it. The shotgun had no sight, so I took a stick of white oil pastel from my art studio and marked a short dash where I thought the sight should be. Looking back, I don’t think the mark actually helped my shooting. And eventually, the barrel rotated so that the mark was 90 degrees to the left. I took all of this in stride, learning as I went and making do with what I had.

By my second season as a real wingshooter, I was spending enough time in the field that it was becoming a part of who I was. One of my friends was interested in shooting birds over my young Labrador, Ruger. I put the old gun in her hands, giving careful instructions to not cock it until ­Ruger got birdy.

We set out on a training field where I had placed 25 quail for Ruger to flush and for her to shoot. At the time, I had no idea how to plant quail and our outing was not going as planned (the birds weren’t getting up). But eventually Ruger flushed a poor-flying bobwhite and my friend managed to get off a quick shot. She missed, but she turned and looked at me with the most sinister grin, gun barrel still smoking. She was hooked. That gun had done more for hunter recruitment in one bad shot than Ruger and I could do with a whole day.

A couple of years have passed, and I am a much better hunter and bird dog handler. I’ve retired the old shotgun from its killing duties and now use it mostly for dog training. It’s become an important tool for gun-breaking my second bird dog, a pointer named Vegas. When I needed to introduce this young pup to gunfire, I started him with a blank fired from a .22 pistol, to which he gave little notice as he continued chasing a flushing bird.

Excellent. Then on to slightly bigger, louder ­introductions.

I again let the pup knock and chase low-flying, pen-raised quail, and while he was in hot pursuit, I fired the old man’s gun. That got Vegas’ attention. He stopped, looked back for a second, slightly confused, and proceeded to the task at hand. Success.

In some ways, when I retired the gun from hunting, I also retired my own bloodlust. Hunting is no longer about killing a limit of squirrels or quail. To me, it’s now about the perfect stature of a blue-blooded pointer after the wing and shot. And still, my reverence for this old relic is tied to my love for a fully broken bird dog. They work in tandem, and I realize that by developing a class bird dog for field trials and guided hunts, I’m honoring opportunities that my ancestors surely did not have.

These days, I mostly hunt with my Beretta ­Silver Pigeon, a gun I worked hard to earn and that is part of the legacy I hope to eventually share with my children. But this season, I’ll bring the little .410 back out to the field, as a way of ­offering a fair chance to the birds and a fair challenge to myself. I’ll take it for another stroll among the longleaf pines to feel that old gun’s history, ­forgotten and remembered.