For some, it’s the promise of greatness (however you define it) that makes them “top dogs.” For others, it’s an... 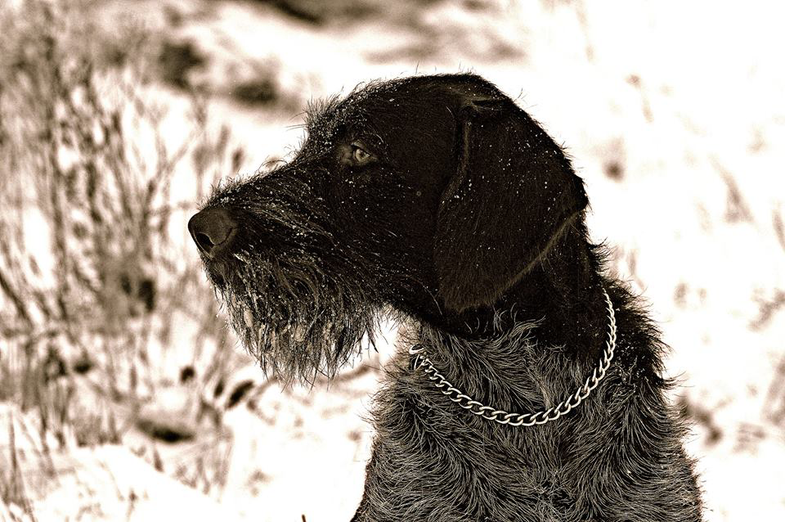 For some, it’s the promise of greatness (however you define it) that makes them “top dogs.” For others, it’s an indefinable something lurking just beneath the surface that you feel more than see. Potential is a wonderful trait—all our dogs have it, some even fulfill our expectations sooner or later. This dog will—I hope.

All business, Baron is clearly trying to live up to his Germanic heritage as well as his name. Approaching every hunt with elegant gait and high head, this noble dog is a poster boy for the stylistic difference between the German ideal and the genetically-identical American version of “wirehair.”

The German breed club Verein Deutsch Drahthaar (Club German Wirehair) and their North American affiliate have a wholly-different registration, testing and breeding regime than dogs registered with the American Kennel Club. Style, conformation, even coloring are often cited as points of difference between the two types, but suffice it to say “DDs” are in a league by themselves, according to their owners.

I doubt Baron cares about paperwork, testing, or breed wardens when there are birds—or furred game—to pursue. “When he comes in the house he’s my lap dog, in the kitchen lying on the floor when I cook,” says his owner. “But when we pick up a shotgun, the machine comes back out.”

Once in the field, “he knows where to go, versus you telling him where to go.” When a bird – or rabbit—is shot, “you know he’s going to pick it up and bring it back,” Kluck says with quiet pride.

Watching them work a field, its evident Baron is an extension of his owner. Constant companionship has built a rapport that manifests itself in an almost-telepathic two-way communication.

All In A Day’s Work // Baron is constantly checking the wind. A methodical, very “German” style of covering the field in tidy windshield-wiper swipes enables his high head to detect every molecule of scent. In deep cover, he’ll hunt 40-80 yards from his gunners. In open country, he’ll stretch out.

The German test expectations, and Kluck’s own hunting, put Baron on upland birds, waterfowl, and rabbits, sometimes in the same day. His blood-tracking ability is also used by nearby deer hunters to find their quarry after the shot. Whatever he’s doing, he does it with restrained panache and quiet self-confidence.

But Kluck says his forte is upland birds. “We were in the middle of a sharptail covey, where he went on point then watched two birds drop in different directions. He retrieved the one, went after the runner next, tracked him out through heavy cover, rooting his way through to come back with the prize,” her choice of words betraying a deep affection for the dog and his work ethic.

Defining Moment // Arriving from Germany at eight weeks, “from the time we picked him up at the airport–the minute I opened the kennel door, he came bounding out, saying ‘I’m here, let’s go.’ No intimidation, not a worry in the world. No shell shock, very mentally stable. You hope you can do right by them,” she says.

Like Scratch the shorthair, Baron may also be awaiting his next defining moment: he is currently preparing for the German Verbands-Gebrauchs-Prüfung, or utility test, a tour-de-force of finding, pointing, and retrieving birds on land and water, retrieval of furred game, and a 400 meter blood track.

Personality Traits // This momma’s boy is intensely loyal to his human. Businesslike in the field, at home he will perch on his porch bench and watch as Kluck gardens, all the while scanning the horizon for danger. Or birds.

The Look // He should be wearing a monocle. He lives up to his name, his regal countenance would fit perfectly in a gilt frame over the hearth in a Black Forest hunting lodge. The fuzzy eyebrows and beard express a heritage steeped in nobility, canine and human.