Want to keep your pup hunting? Learn how to use an e-collar properly 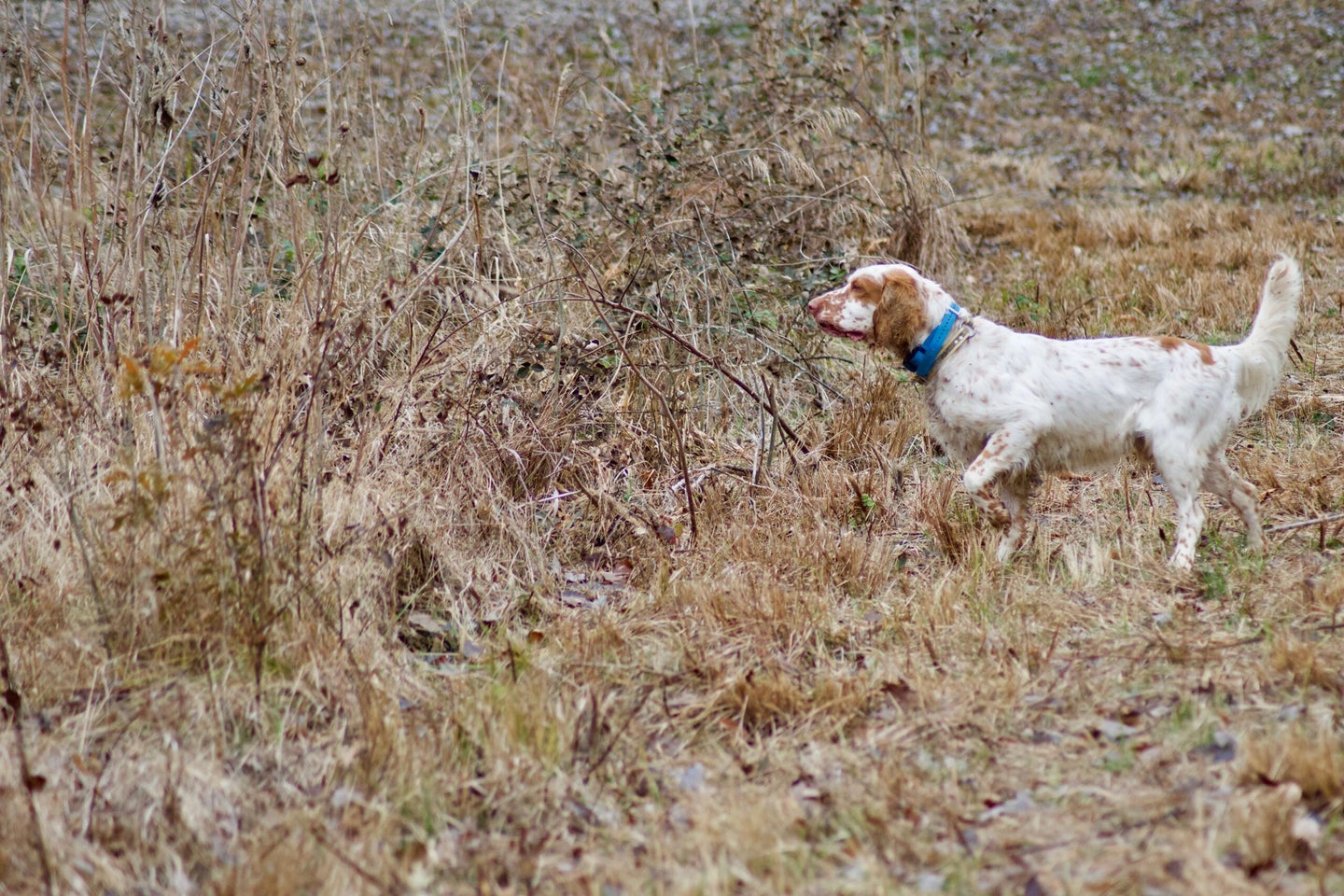 E-collars do not train obedience, they reinforce it. Joe Genzel
SHARE

I’ve hunted from too many ducks blinds, walked pheasant fields aplenty, and stomped through countless timber stands, chasing squirrels and rabbits. The one commonality I have found enjoying all these pursuits with working gun dogs is that sometimes there is an instant disconnect when a handler straps an e-collar onto his or her dog. You can tell almost immediately that the dog was not properly trained with the collar, because it will shut down just as soon as the hunting begins.

Many of us have been frustrated by our dogs, and I am here to tell you that it’s your own damn fault. I have a 5-month-old holy terror of a squirrel dog (West Siberian Laika), and have made a few obedience mistakes already, though we are not utilizing an e-collar yet. I don’t fret too much over the blunders that come with not having owned a hunting dog since high school (at least not yet). I know that it will cost you more than a little frustration if you don’t properly train your dog before introducing an e-collar. So before you ruin a well-bred pup, make sure you have checked all the boxes that need checking. Then your dog will hunt as he should—eager for a morning in the marsh, milo, or woods.

1. An E-Collar Will Not Solve Any of Your Dogs’ Problems

I’ve spent a lot of time talking with Tom Dokken, who is considered by many to be the foremost authority on bird dog training. One of the things he always told me was that if your dog doesn’t know how to sit, stay, and come on a leash, he won’t be able to do it off leash with an e-collar around his neck. That means before you use an e-collar to reinforce commands, you have to train your dog to follow those commands on a leash or long lead.

For instance, you put the lead on your pup, tug at it, and tell him to come. You get him to sit and stay—all on leash. Then there is a transition period where you introduce the e-collar on its lightest setting while the dog is still on the lead. When you tell the dog to come, tug that lead, and give pup a nick with the e-collar. He will associate that little buzz from the collar with coming to you (eventually), and when he does that repeatedly, only then can you can take him off the lead.

Think of it this way: if you’re going to your kid’s soccer game can you trust that your dog will do what you say when he is off leash and has the e-collar on? If the answer is no, then he’s not ready to be off leash, and there is more training to be done.

“You don’t teach a dog anything with the e-collar,” Dokken says. “You are reinforcing what the dog has already been taught. You can’t just put the collar on an expect the dog to know what to do. It doesn’t work that way.”

When e-collars first came out they had one setting and it fried your dog down to his bones. The idea was if you zap a dog hard enough when he does something wrong, he will never do that bad thing again. But in reality, that just killed prey drive because every time the dog did something its owner perceived as wrong, the dog got lit up. That mentality still exists today. Handlers think they have to dial a remote to max power and let their dog have it. But it’s a big mistake. Because overcorrecting your dog can turn a $10,000 retriever into a house pet.

“If you have an upland dog, say a pointer, and you don’t like how far away he is getting from you, and every time he does that, you correct him harshly with the e-collar, that dog is eventually going to shutdown. He won’t hunt,” Dokken said. “He will think his safest place is by your side because every time he ventures out, you hammer him for it. If he stays next to you, he figures he won’t get shocked.”

3. Taking the e-collar off when your dog is doing well

OK, your dog doesn’t need to sleep with the e-collar on, but anytime you are going somewhere that the dog needs to be obedient, he should have the e-collar on. Some folks collar condition their pups, get them all squared away with e-collar training, and then take it off. This makes absolutely no sense. I guess they figure, well, he is trained now, don’t need the e-collar anymore. But dogs with champion blood are smart. They will push limits and test boundaries and if you have no way to control them off leash, they, as the great writer Jim Spencer always said “will go into business for themselves.”

“Would you ever ride a horse without a saddle?” Dokken jokingly said. “No. And you shouldn’t take the e-collar off your dog either. It’s your connection to the dog, so he knows you have the ability to correct him.”

If you don’t think your dog will run off at some point when you remove the e-collar, you’re flirting with danger. With no way to control your dog, he could end up chasing a deer into the next county never to be seen again, or worse yet, get hit by a car. My old boss and former Gun Dog editor, Rick VanEtten, almost had both happen to him on the same morning. He was walking a young setter through the woods when the pup caught sight of a whitetail and gave chase, across a four-lane interstate. Rick could only watch in panic as Maddie played chicken with speeding semis. The next day he bought her an e-collar, trained her on it, and when she chased a deer again weeks later, he corrected her, and she came ambling back to him.

“I never believed in those things (e-collars),” said VanEtten, who was still using collar bells at the time (so he could locate his dogs). “But this one saved my dog’s life, I’m pretty sure. I’m never taking it off of her when we go into the woods.”

4. Over correcting with an e-collar

Deer chasing is something every bird hunter wants to break their dog of, but what if you have a gun dog whose purpose is to chase and track wild game? That’s the situation I’m in. My pup is well on his way to becoming a damn fine squirrel dog, but he loves to chase deer. Right now he’s not fast enough to keep up with a whitetail, but as he gets older that’s going to change. Laikas are known for their ability run down, tree, and bay big game, and at some point he will be fast enough to keep pace with any doe or buck.

My question for Dokken was, I have a breed that was meant to track. I don’t want to take that out of him by giving a correction on the e-collar when he runs after deer. I’m afraid that will suck the prey drive out of him and he won’t hunt squirrels and other small game like I want him to.

“So with any breed of dog, when they are young, you need to teach them what they can hunt and get them familiar with that, so if they take off after a deer or some other animal that you don’t want them to pursue, they won’t equate that correction with the ones you give them while hunting the species you want them to hunt,” Dokken said.

That means when your dog is pup, let them chase, or keep them on a leash if you’re going into an area you think might have deer or other game they might chase. Most pups are going to lose sight of deer and break off. That’s what my dog does. The only instance in which you should correct them harshly with the e-collar is if they put themselves in danger. But don’t make a habit of that or it could make them shut down. If you’re close to road, you might just have to put the dog on a leash for safety sake.

Some folks think an e-collar is meant to control a dog. Well, yes, it is, but its main purpose is to give you peace of mind that your pup will do what you ask of it when he is off leash. You have to be cognizant of that at all times whether you are hunting or going for a walk in the park. If your dog suddenly doesn’t respond or do what you want him to, it’s 99.9 percent your fault, and you shouldn’t take it out on your pup.

A few years ago, I was hunting with a guy whose duck dog was obedient around the house, but when we were in the field it wouldn’t listen to any of his commands. You can probably guess that those few days we hunted together were hell for that dog, but it didn’t have to be. My buddy hadn’t spent any time in the offseason working his dog with the e-collar on, just drills in the backyard after work a few nights week. So when the dog left a fenced in yard for an open field, he was over-stimulated, out of his comfort zone, and couldn’t be controlled.

You can’t do that to a dog. There’s no magic switch to flip on opening day. Dokken talks so much about an e-collar being a reinforcement tool, well you have to keep drilling the same concepts into your dog…with the e-collar on in situations that mimic how you will hunt.