Trail Camera Test: 12 of the Best Models on the Market 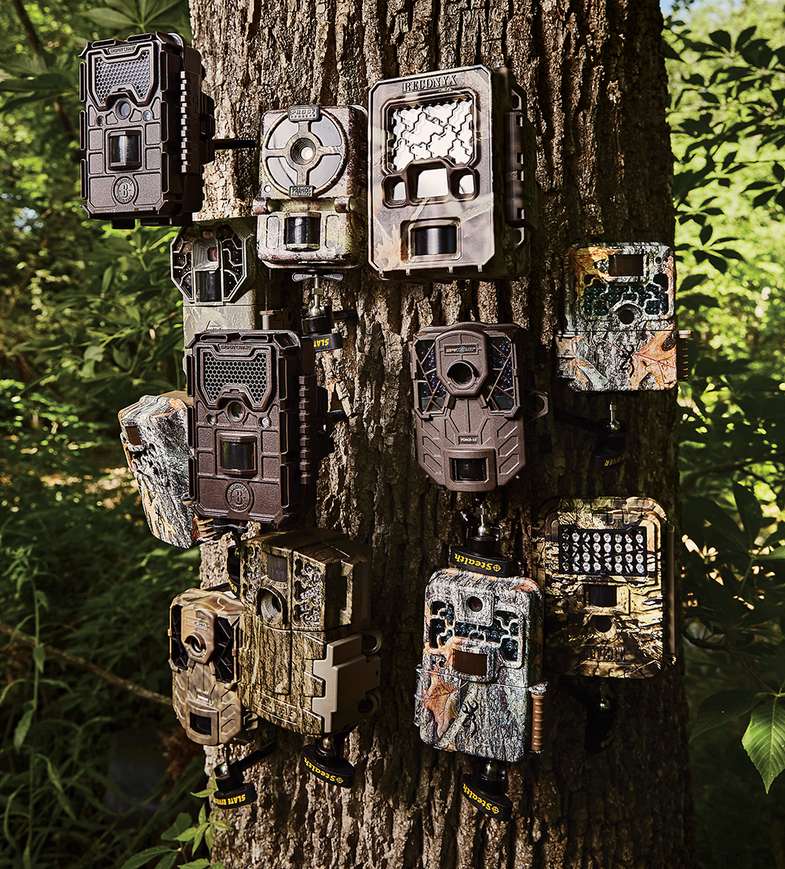 The trail camera is a simple tool—a box that takes pictures when objects move past it—that is powered by advanced technology. In recent years, picking the right camera has gotten as complex as the tech itself. Now, dozens of companies offer camera models that each bring a variety of features. You want photo or video? Red-glow or no-glow? And which cam delivers the best photo quality?

To bring resolution to the picture, we partnered with Trailcampro for their annual test. TCP has tested and sold trail cameras for more than a decade. Each year they pull all available models off the rack and run them through a series of tests. TCP sells cams from the major brands and offers a two-year warranty. In other words, their business lives or dies on their ability to test cameras well.

TCP tested more than 50 cameras this year, but in the interest of reader attention, we whittled that field down to the 12 top-scoring cams regardless of manufacturer. For more details, see “How We Test” below. 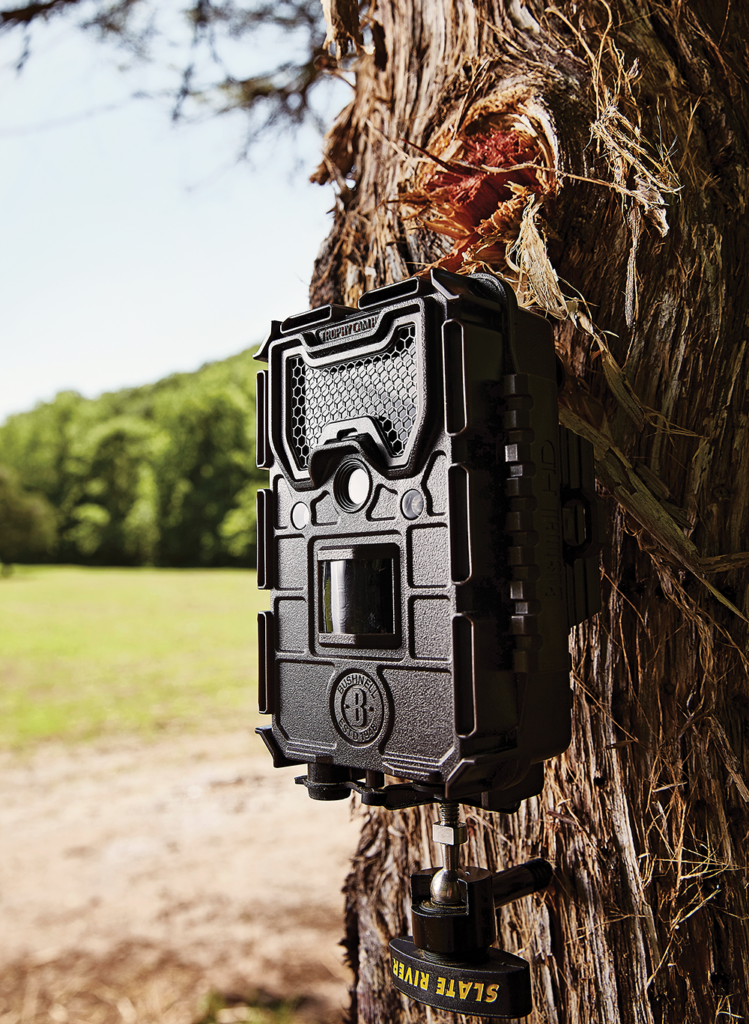 The aggressor has simple controls and a ton of features, but most important, it fires more pictures than any of the other cameras. It ran away with the detection-range test and captured photos out to 110 feet. The camera also takes great nighttime shots, reaching out to 110 feet on a moonless night at the bottom of an Ozark holler.

It comes with a field scan option that allows you to set the camera to time-lapse mode, in which it will automatically snap a photo (without needing to be triggered) at intervals of your choosing. This option is also available at night. The test team loved the cam’s case design and controls. Overall, this is a well-built, smartly designed camera for deer hunters. 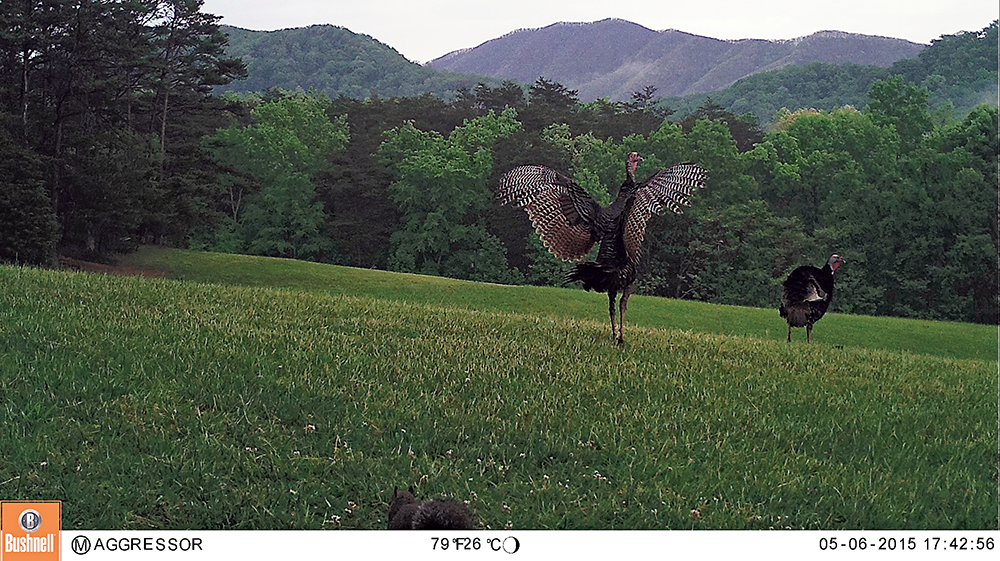 The best cameras, like the Bushnell Aggressor Red-Glow, are capable of stopping motion and taking crisp photos day or night. 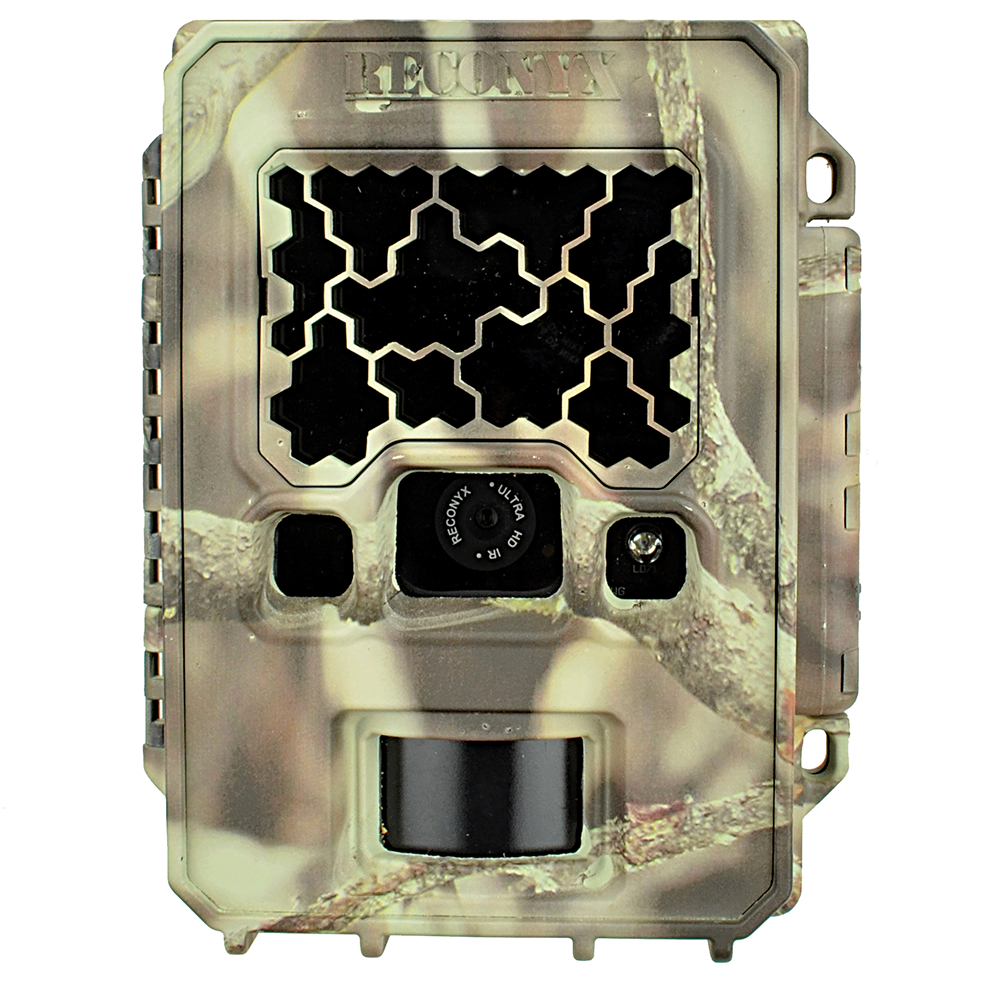 Why are Reconyx cams so damn expensive? It’s because they outlast competitors. If the camera breaks down, Reconyx will fix it (even beyond the warranty) or give you a credit toward a new camera. They’re built better (made in Wisconsin) than many other cams, and the battery life is second to none. The HC600 came in second in the detection-range category and third in night photos. One flaw with the camera is that it doesn’t shoot video.

Most cameras in the $100 to $115 range aren’t worth messing with. Typically, they will be inconsistent in taking photos, shoot awful nighttime images, or die after a few months of use. The worst models will do all three. But the Spypoint Force 10 is an exception. Like its brother, the 11D, this camera has a lightning-fast trigger speed of .32 seconds and a snappy recovery time of .5 seconds. It shoots quality photos and video during day or night.

The only hitch with this camera is durability. The plastic body is feeble compared to the top-end cameras, and overall, it feels a little cheap. But, hey, it is cheap. And for the price, you can buy a couple of them.

The best cameras, like the Bushnell Aggressor Red-Glow, are capable of stopping motion and taking crisp photos day or night. 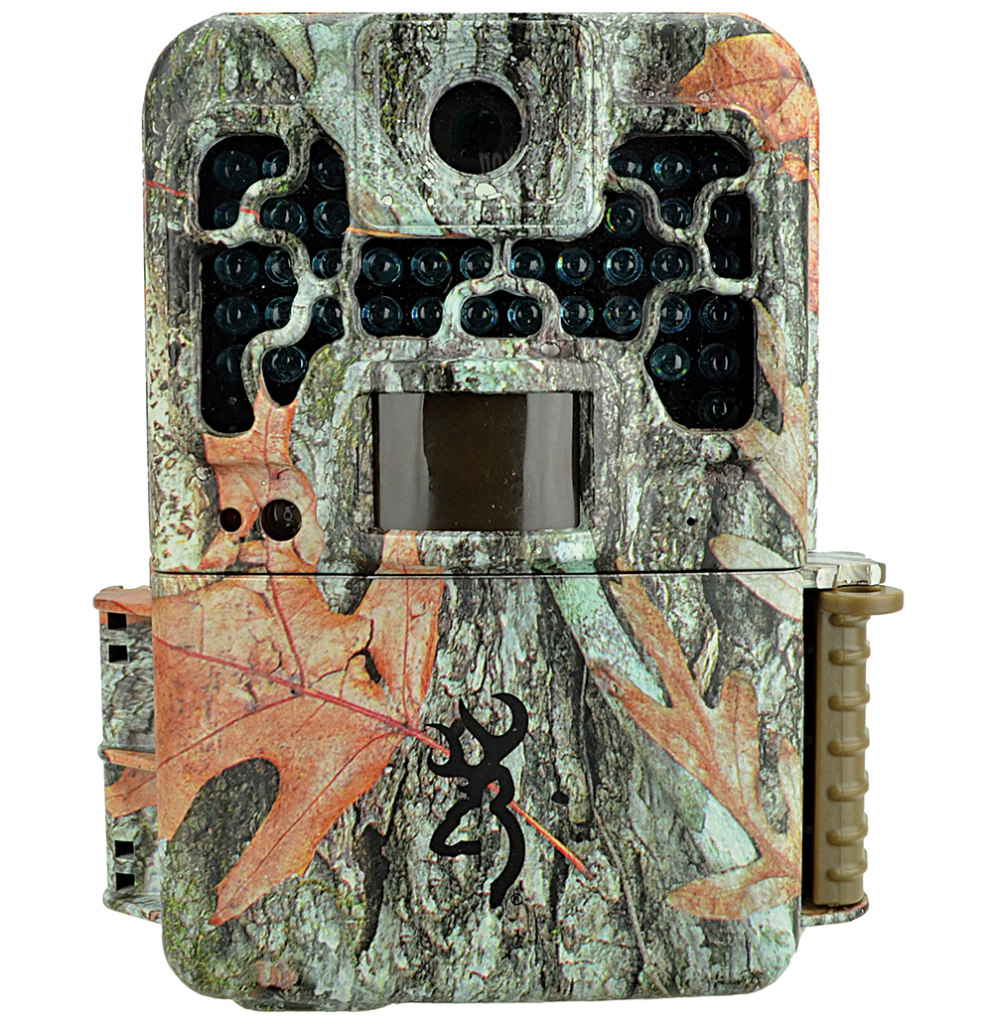 The Browning Recon Force Platinum is easy to use.

If you’re looking for a simple camera, the Force Platinum is your huckleberry. This is a top-tier camera that has fewer setting options than other cams, but most hunters don’t need those extras anyway. It has easy-to-use controls and provides a viewing screen that allows you to play back photos and video, but also gives you a live preview of what your camera will capture while it’s on the tree.

The Force 11D is a Ferrari engine in a Pinto’s body. It has the fastest trigger speed TCP has ever tested at .02 seconds—trigger speed is the time between the sensor’s tripping and the camera’s capturing a photo. Recovery time (the time it takes to fire the next photo) was a blazing .5 seconds. In other words: When a buck trots by, the 11D is going to capture a series of photos, not just a single shot of a tail waving goodbye. It was dinged on design and durability. 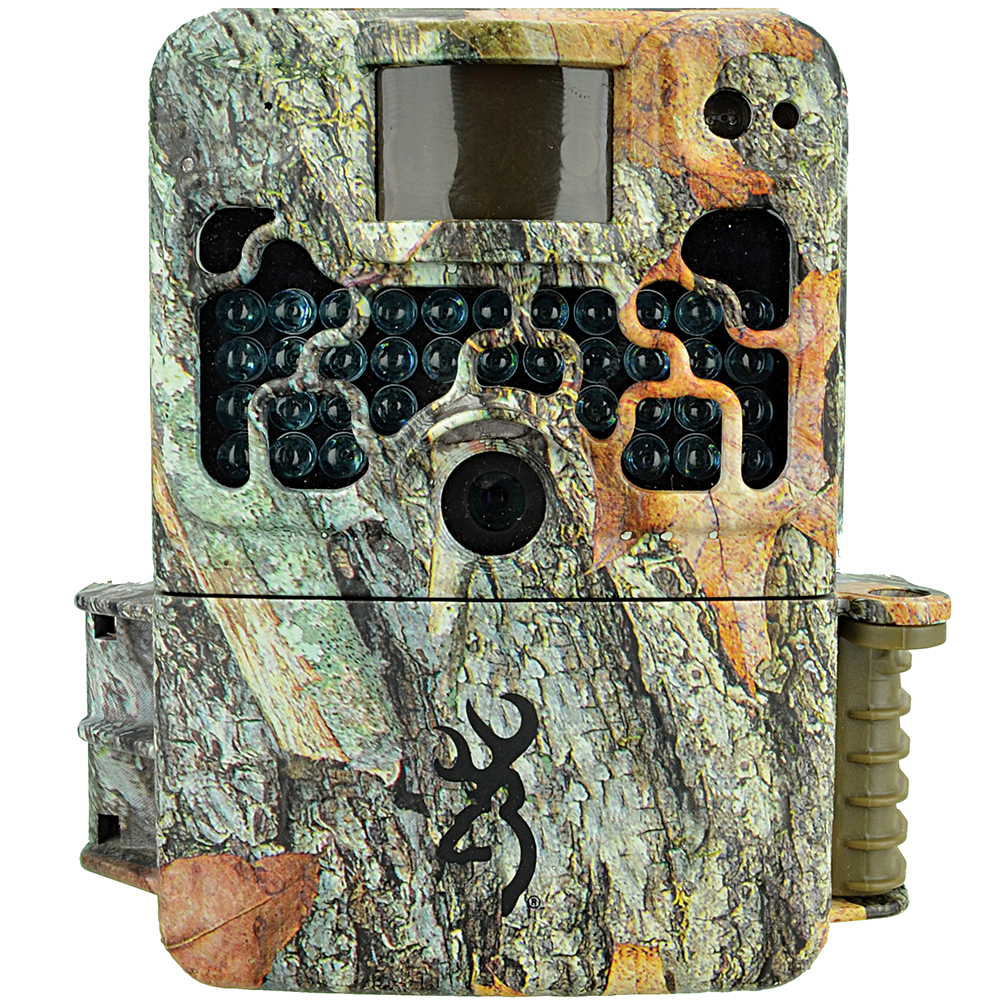 Browning makes solid, compact cameras that deliver good photo and video quality. This cam doesn’t have the photo and video playback features of the Platinum, but it comes in at a lower price. The team loved the low-profile design. The only flaw with this model is that its latches are finicky, which will make it tough to open with cold fingers during the chilly months of deer season.

The M888 dominated the night-photo test. In its night photos, we could count points on a 3D deer target set out at a distance of 110 feet in the pitch dark. The camera also did a superior job of stopping motion at night. The upshot: You won’t get a blurry flash of a walking deer. Instead, you’ll get a nicely composed image of the buck and his rack in mid-step, even on the darkest nights. 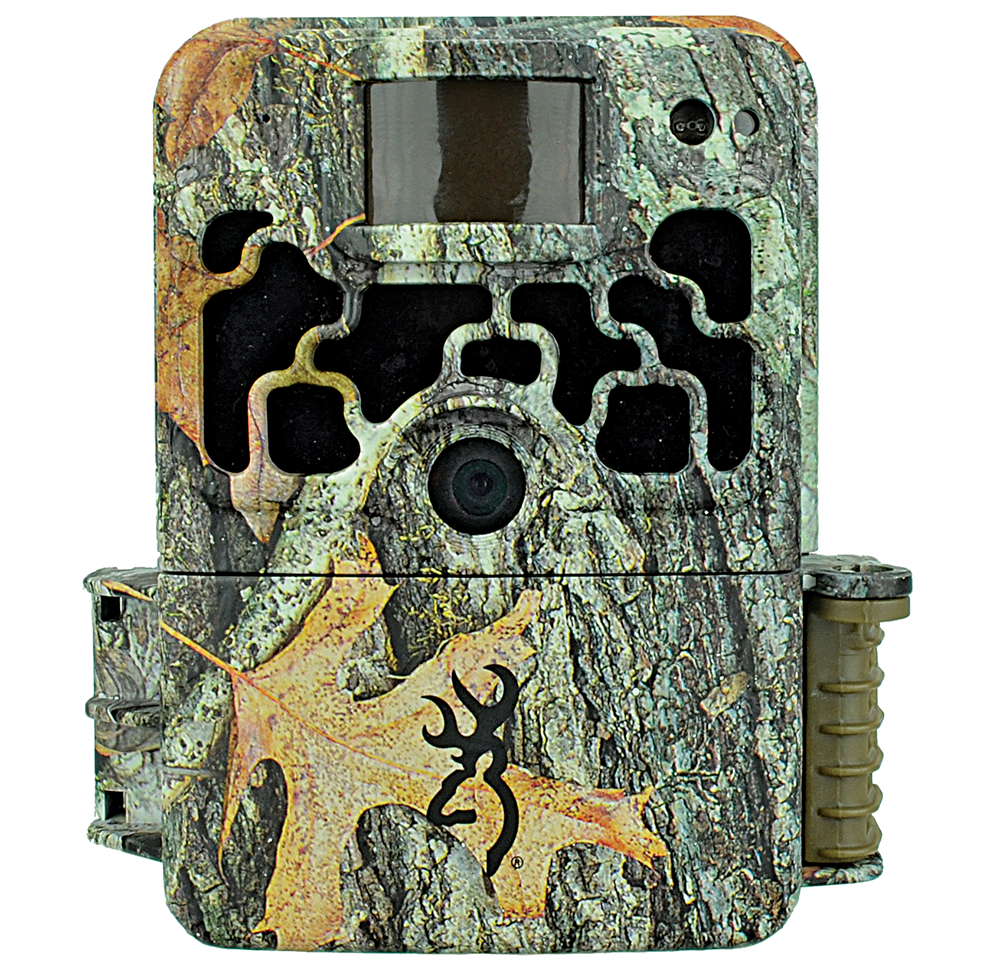 The Browning Dark Ops Elite is a good choice for hunters interested in a low-profile camera.

The Dark Ops is the no-glow version of the Strike Force Elite. This means the night flash is undetectable by the human eye. The downside of this feature is that it has significantly lower night-photo quality, as do many of the no-glow cameras. But if you’re concerned about other hunters seeing the red flash of your camera at night and then stealing that camera off the tree, no-glow is your go-to.

The E2 is the bargain version of the Aggressor. It has the same good construction, design, and easy-to-use controls, but it brings less performance. The biggest drop-off is in detection range. The E2 only reached out to 60 feet, thereby underperforming against the top cameras. On the upside, it took impressive night photos for the price and recorded impressive video. However, the video trigger speed is sluggish at 2.4 seconds.

This is by far the easiest camera in the roster to use. Instead of using a digital menu, you control photo and video options by simply sliding a couple of tabs to the settings of your choice. It’s almost impossible to mess up. This little guy does its best work in the dark. It took fourth in night photos, even though it was competing with cams that cost much more. It lost points on detection range, but would still be a great starter camera. 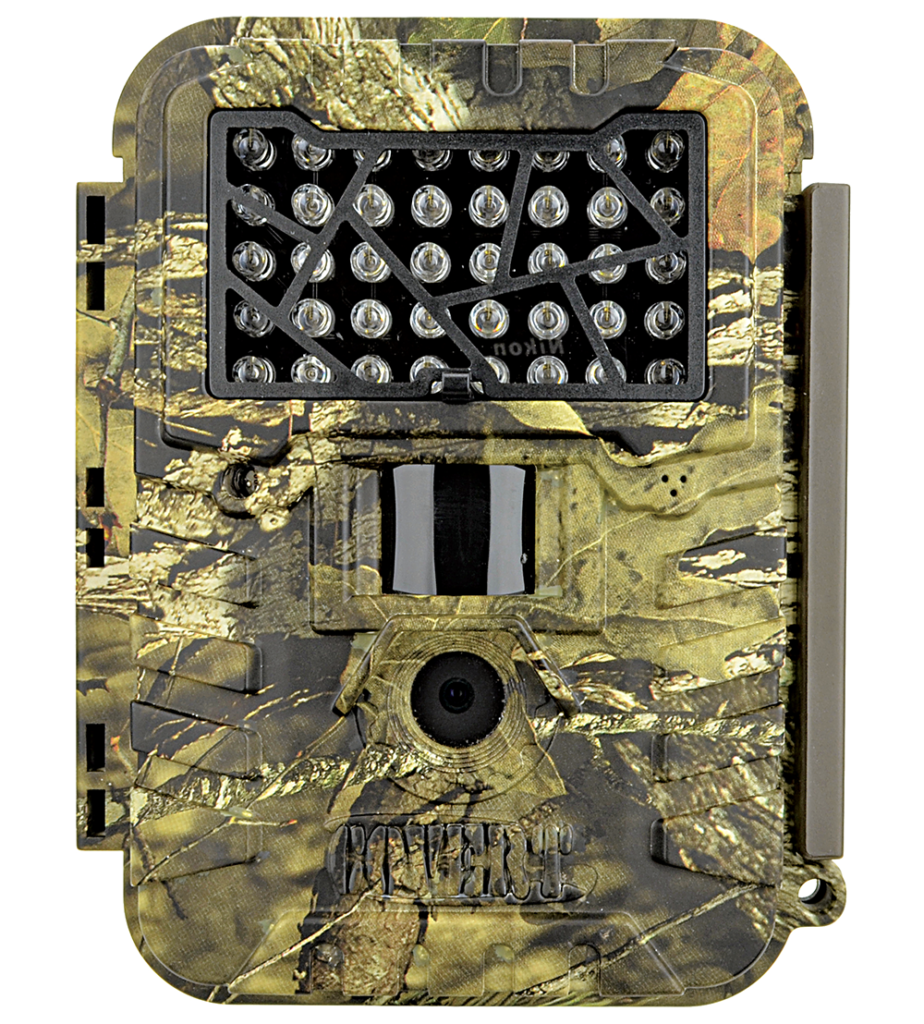 The Covert Night Stryker earned high scores for battery life and usability, but fell short in the detection speed and range categories.

Covert has a strong following because its cameras are durable and easy to program. True to its name, the Night Stryker did well with night photos, but it fell off in the detection-range test. It suffered from a slow trigger speed and a recovery speed of 1.04 seconds and 5.1 seconds, respectively. But it still has some nice features, including a sturdy latch and construction, and a useful playback viewing screen.

This camera has a good trigger speed and recovery time, and it takes quality photos. It comes with quick-set options for programing, and the control menu is intuitive. But the camera lost points on durability and battery life. On the bright side, even though it is a no-glow camera, it shot decent nighttime photos and came in second among no-glow cams in this 12-product lineup (behind the Reconyx HC600). 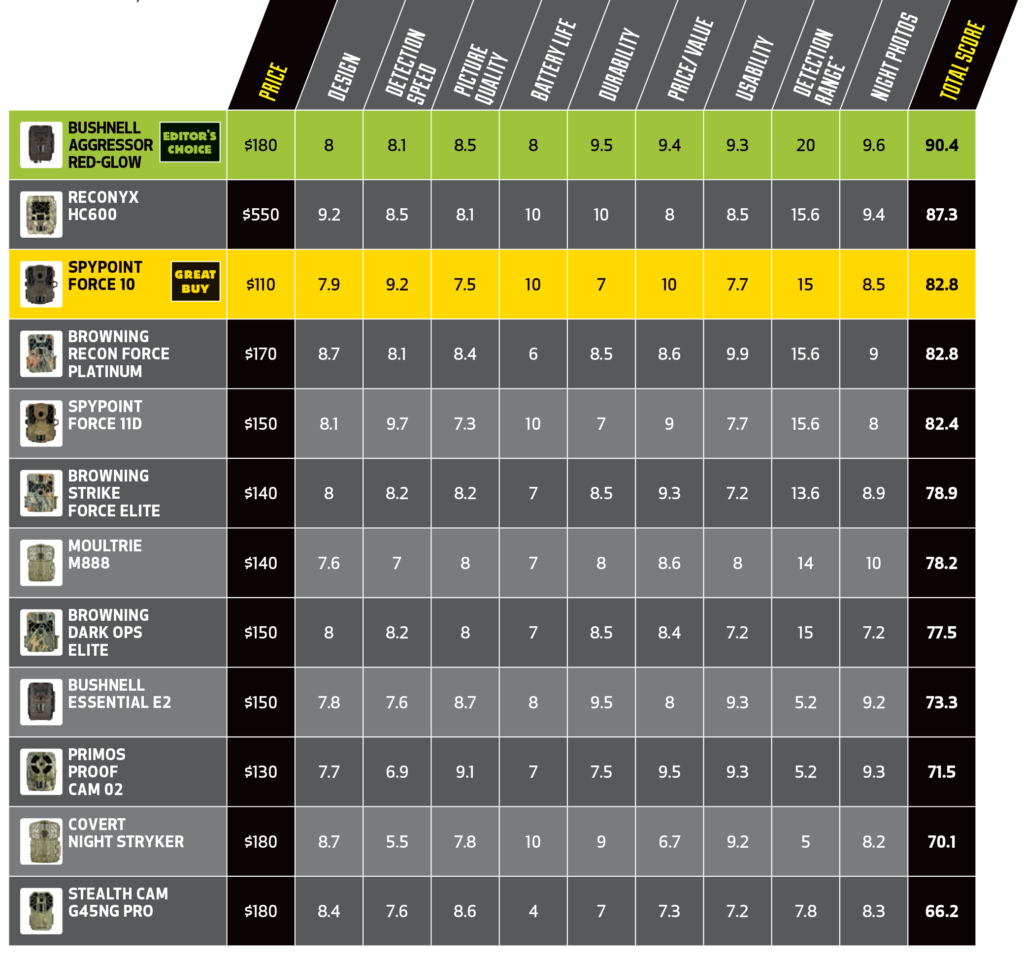 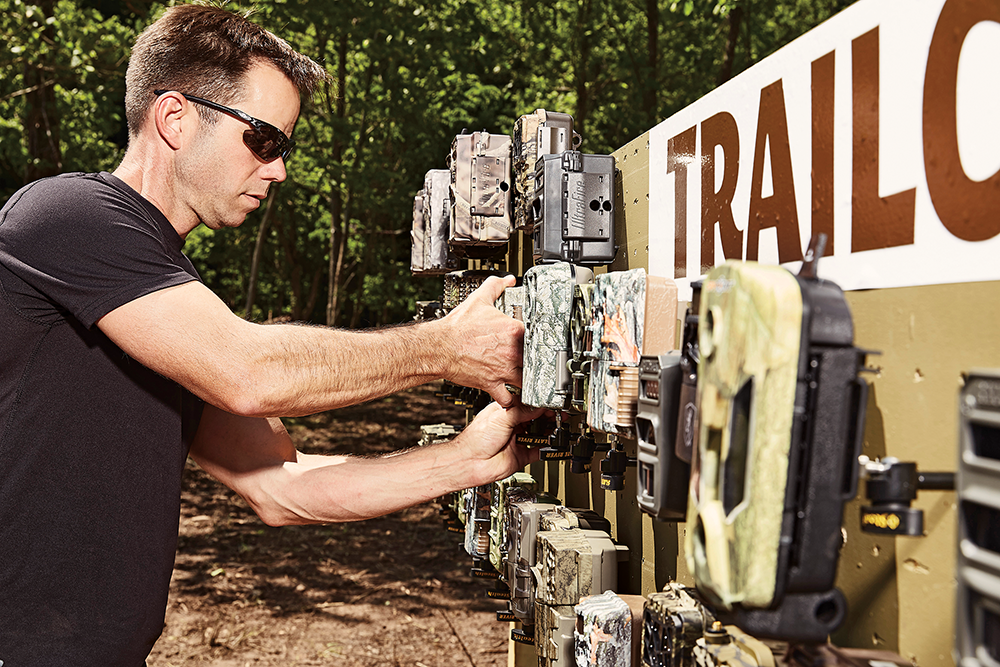 We teamed up with Trailcampro for this year’s game camera test.

A breakdown of the methodology behind our review

Three of the nine scoring categories (detection range, detection speed, and battery life) are objective and based on TCP data. The detection-range score is double-weighted because it most closely matches the real-world scenario of a deer walking past a camera. The TCP test team scored the subjective categories of design and picture quality. I scored the subjective categories of value, usability, durability, and night photo from the perspective of the everyday deer hunter.

Detection Range
All cameras are secured to a board facing an open field and activated to their most effective setting, which can vary from camera to camera. A tester walks by the board from left to right, then right to left. His first pass is at 10 feet, then he moves back at 10-foot intervals to 110 feet. The camera that captures the most pictures of the tester gets the highest score.

Detection Speed
This factors in trigger speed and trigger recovery time. The data comes from objective, automated tests conducted by the TCP team in their shop.

Night Photo
3D archery targets are set out from 10 to 110 feet. Under complete nightfall, each camera is secured to a testing post. A tester walks by the camera to trigger it. I evaluated the night photos to determine how far the flash ranged, photo quality, and how well it froze the motion of the walking tester.

A Note on Video
Trail cam video is popular, but most hardcore deer hunters still prefer photo mode because photo trigger speeds are typically much faster. Not all cameras in the test had video capabilities. Those cameras that shot the best-­quality video got bonus points in the value category. 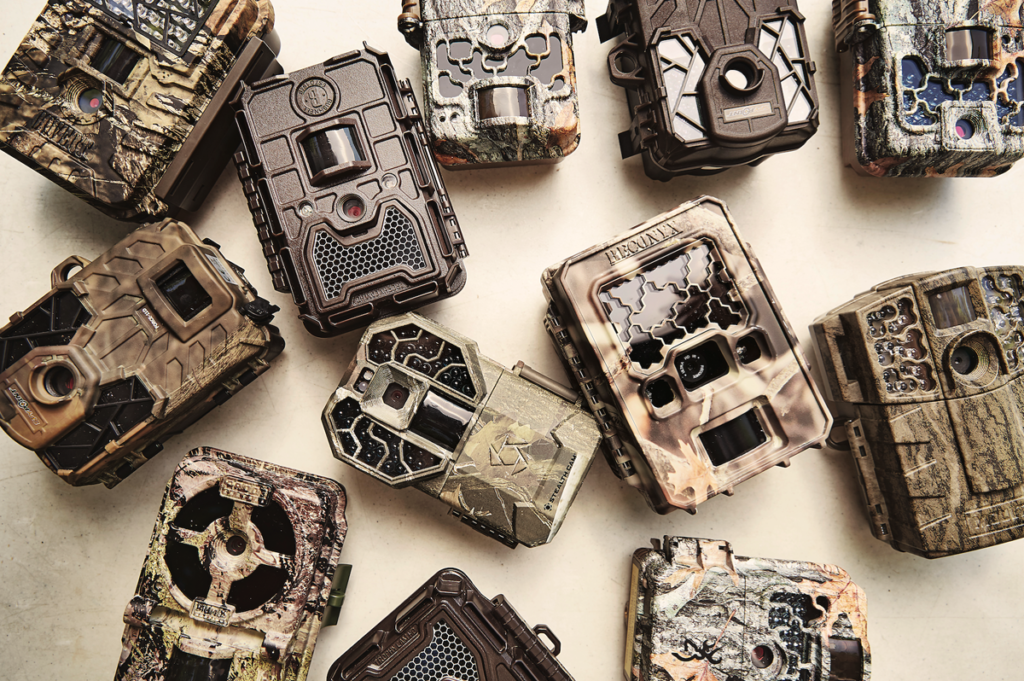 The advertised megapixel ratings for most cameras are total B.S. Nearly every camera on the market is capable of shooting photos at only 3 megapixels, according to TCP. Marketing hype has outpaced engineering. Companies use software to interpolate the image and jack up the megapixel rating for promotional purposes only. This means splitting the existing pixels, not actually increasing the true number of unique pixels in the image. This fact from TCP was confirmed by reps from two major trail camera companies. The takeaway: Just because a camera’s box states “18 megapixels” doesn’t mean that it’s going to capture a sharper image than one with a smaller number.

Want to know how good your trail camera is? Here’s now to run an abbreviated version of TCP’s detection test in your own backyard. Hang your camera on a tree and walk by it at various distances. Hold up a card with a number written on it that matches each yardage. When you review the pictures, look for three things: (1) maximum detection range; (2) most effective range (the distance at which your cam shot the most pictures); and (3) holes in the detection range (for example, the camera shot pictures at 30 feet and 50 feet, but missed 40 feet completely). 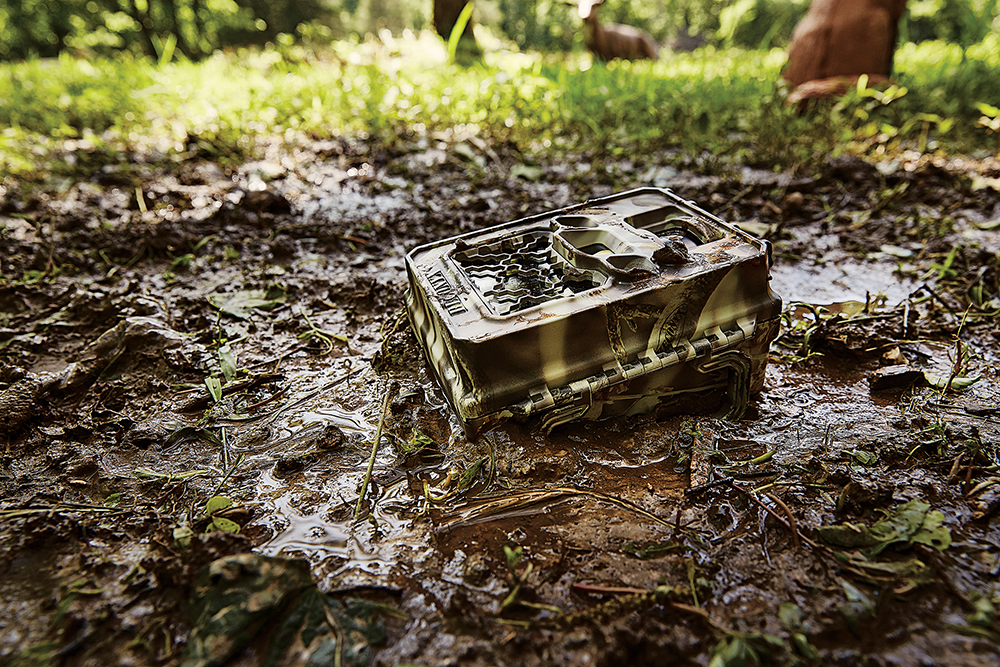 You can replicate our test at home.

Mess around with the settings and repeat the test a couple of times. After you understand the ranges at which your camera takes the most pictures, you’ll be able to hang it more effectively in the field and fewer deer will ghost by your setup.