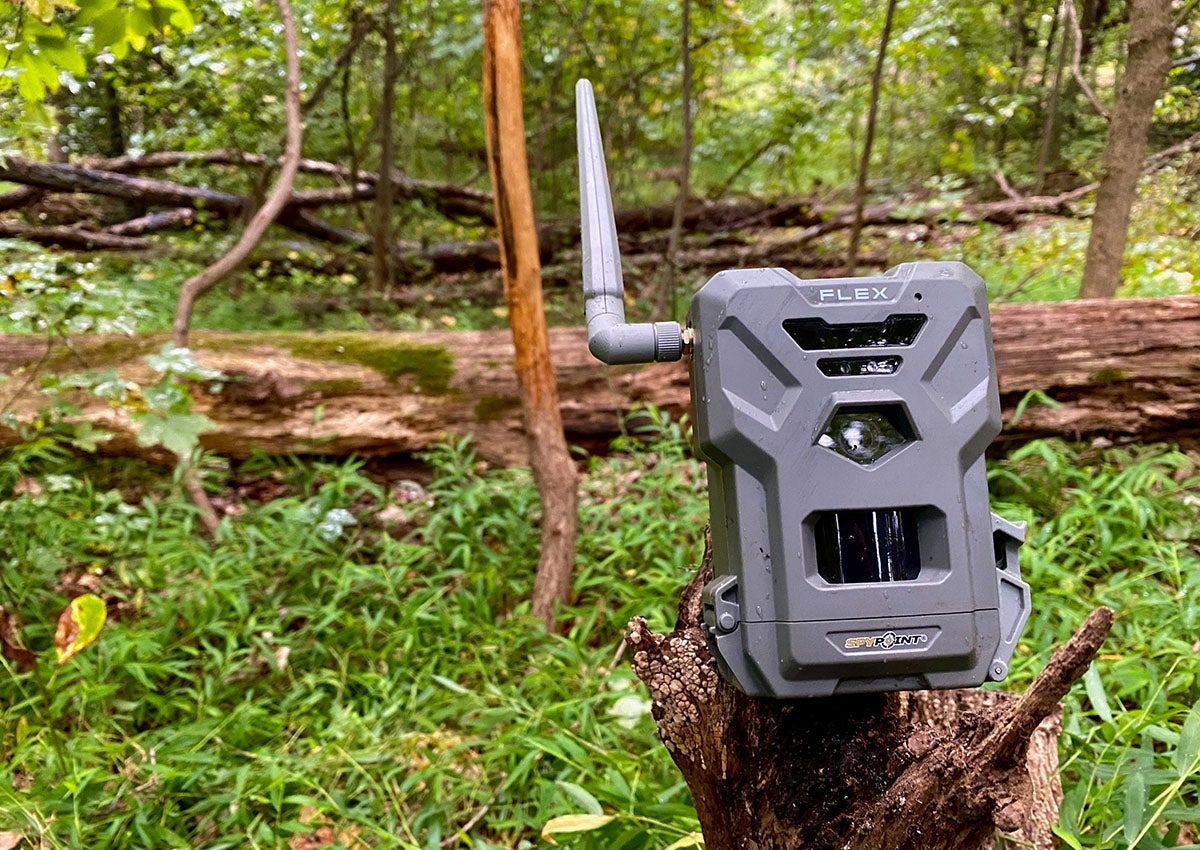 I resisted buying a cellular trail camera for years, but a whitetail hunt with Field and Stream hunting editor, Will Brantley, changed everything for me. I saw how he used the real-time intel from trail cameras to choose hot stands and learn about how deer used his properties.

It wasn’t long after that I bought my first cell cam, a SpyPoint Link Micro. I was surprised at how easy it was to set up and how addictive it is to check the app for new photos. Looking through the few dozen photos daily also beats looking through a few thousand from my standard trail cams. The Link Micro is good, but I wanted to add a better camera to my toolkit this year, so I bought the new SpyPoint Flex. I’ve had it for a few months now, and it’s been hanging along trails, in feeding areas, and over mock scrapes. It was also part of our cellular trail camera test. Here’s what I think of it so far.

You’ve probably noticed that in some places, one cell carrier has a strong signal while another carrier has a weak signal. The Flex’s dual SIM cards will automatically find the carrier with the strongest signal and connect to it.

You can capture photo, video (with audio), and time lapses with the Flex. In addition to the traditional time lapse, you can also enable Time-Lapse+, which will take a time-lapse at your set interval and still take photos when the camera’s sensor is triggered.

Those prices are monthly per camera, and you can choose different plans for different cameras—you can save a little if you buy an annual plan. You can also cancel anytime if you’re paying monthly, which I choose to do since I don’t run cameras all year.

I’ve been using the SpyPoint app with my Link Micro for over a year, and I’ve found it easy to add cameras, review photos, and update settings.

Adding a camera is as simple as inputting the model and scanning the QR code in the battery compartment. From the app, you can adjust your image capture settings and how often you receive images from the camera. You can also view the camera’s battery life, signal strength, SD card status, location on a map, GPS coordinates, and ambient temperature.

The main function of the app is to view your photos and videos. By default, the app sorts your photos by date and time, but you can add a species and media-type filter. When you capture a cool photo you can favorite it, download it, or share it right in the app.

Testing the SpyPoint Flex in the Field

I spent my own money on the SpyPoint Flex (rather than asking the company for a test model), because I needed a cell cam and I figured that if I happened to like it, I would write a review. I’ve had the SpyPoint Flex for two months, and I’m happy to report that it has performed well in both the field and in a standardized walkthrough test.

For my preseason scouting, I moved the Flex between travel corridors, mock scrapes, and feeding areas. It has been 100% reliable and always sends photos on the scheduled times. On trails, the trigger speed was great, and the three-photo burst captured multiple, clear photos of deer as they walked past the camera. The first photo was typically the deer entering the frame, followed by a centered photo and one last shot as the deer left the frame. In feeding areas, the camera was sensitive enough to capture deer as they approached, so I could see which trails they were using.

You can hang the Flex with the included strap, but I like using it with a screw-in tree mount because the ¼-20 threads are located on the back of the camera instead of the bottom. That thread location makes it ideal for use with that style mount. But it also makes it difficult to use on mounts that stake into the ground and are meant to screw into the bottom of a trail cam.

The Flex’s photo quality is great—day or night—and it captured footage of two impressive bucks feeding in front of my camera. I first caught one of those bucks on camera as he cut through the area. The buck was just in the upper right-hand corner of the photo, but it was enough intel for me to remotely switch the camera over to video. I don’t leave the camera on video regularly because SpyPoint charges an additional fee to send the full 15-second video to your phone. You get the equivalent of a flip-book video if you don’t pay the fee. Another thing to keep in mind is that sending videos will hurt your battery life.

I was recently part of a test team that evaluated the best cellular trail cameras using a standardized test procedure. The protocol was to walk by each camera at a normal walking pace at 10, 60, and 110 feet—day and night. This walkthrough test would evaluate the camera’s trigger speed, sensitivity, flash range, photo quality, and shutter speed.

At 10 feet in daylight and night, the camera captured three photos of me. During daytime, it caught me in the frame three times at 60 feet, and at night it triggered, but it did not capture me in the frame. The camera did not trigger at 110 feet, but the other cameras in the test didn’t either. It did have excellent flash performance, with an even flash illuminating beyond 110 feet.

What the SpyPoint Flex Does Best

Anytime I set a camera, my first concern is that it won’t work correctly. My second concern, especially on public land, is that it will get stolen. The Flex does a good job at calming both those concerns because it’s a reliable camera with GPS enabled. It’s never missed a scheduled send, even in touchy cell reception, and I have the peace of mind that if someone did take the camera, I’d know where it is as soon as they turned it on. Add those features to good photo and video quality for under $150, and you’ve got a great deal.

What the SpyPoint Flex Does Worst

The SpyPoint Flex has some stiff competition with some great cameras like the Bushnell Cellucore, Tactacam Reveal X/XB, and the Moultrie Mobile Edge for around the same price. Those cameras were all part of our Best Budget Trail Camera test, and the Flex lost out to those cameras on a few points:

The SpyPoint Flex is a good all-around cellular trail camera that comes at a reasonable price with an easy-to-use app. I can put it out in the woods and feel confident that I won’t get a bunch of blanks or blurry images, just clear photos and shooter bucks.