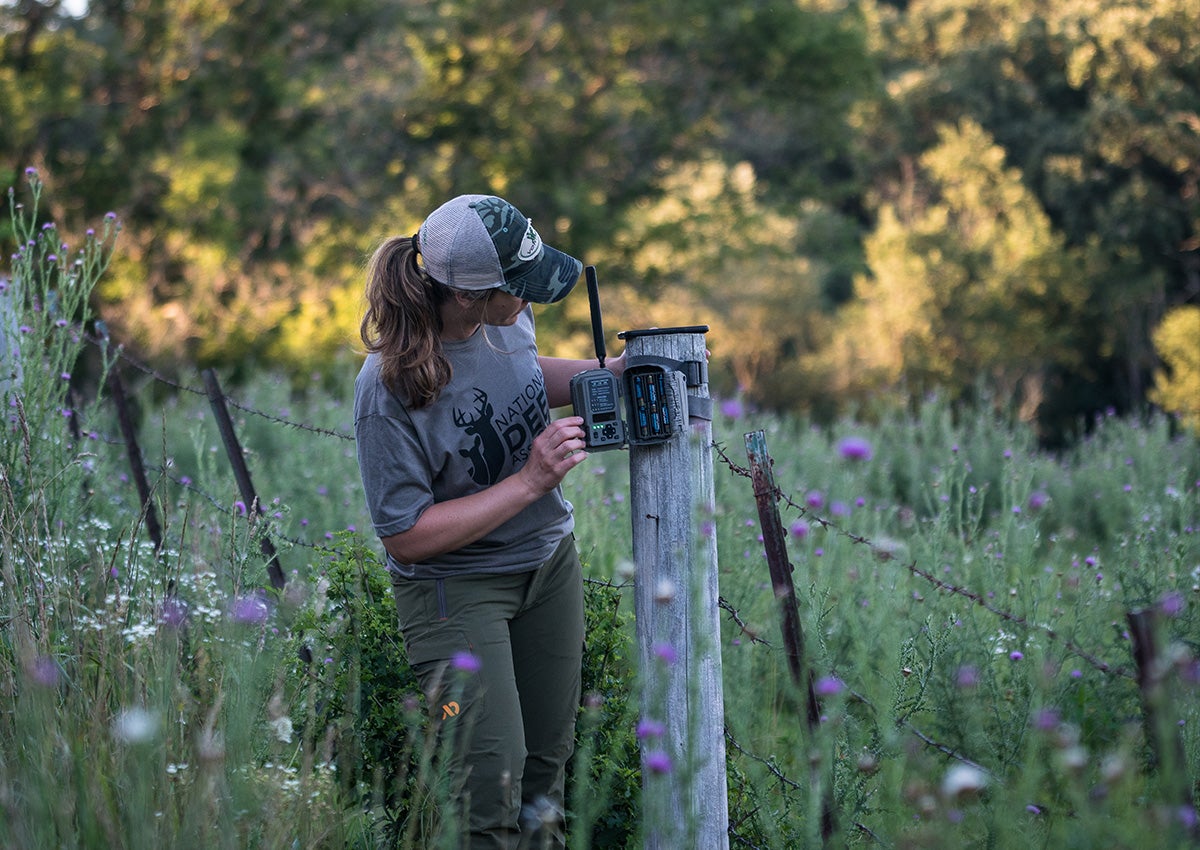 Cellular trail cameras revolutionized whitetail scouting because putting a camera out for a soak is no longer an act of faith. You get immediate feedback that your camera is taking photos and is in the right spot. The issue is that reduced battery life, hard-to-use apps, and poor image quality can negate those benefits. However, the Stealth Cam DS4K has none of these issues. In fact, it excels where many other cellular cameras stumble.

I used the Stealth Cam DS4K Transmit during the 2021-22 deer season, which helped me narrow my search for a Pope & Young whitetail to a secluded, overgrown patch of CRP amidst thousands of acres of public land. The DS4K’s battery life and great image quality helped me identify the unique buck, and stay out of the woods until conditions were right to hunt. Here are my thoughts on the DS4K after a season’s use.

The Stealth Cam DS4K Transmit is capable of frame-worthy photos and Nat-Geo video, but at around $250, it isn’t exactly budget-friendly. However, it comes with premium features that most diehard trail cam junkies crave, and the image quality outshoots its pricepoint.

For starters, users can choose from four capture options depending on their application to get the most performance out of their camera. Available modes include:

The camera will operate as a traditional trail camera, capturing only photo data and no video. This is ideal for anyone who anticipates a ton of camera triggers and doesn’t want to occupy space on their SD card with larger video files. Photo resolutions range from 4MP to 32MP. The camera comes with default settings of 8MP for daytime images and 6MP at night with burst intervals ranging from one to nine images.

On this setting, the camera will shoot video clips at the resolution and time length you specify during setup. It’s essential to understand the default video setting includes audio, which makes for helpful intel, especially if you plan to run cameras over a scrape. In addition to exciting grunts and other deer vocalizations, this camera allows users to get a glimpse at the personalities of various bucks frequenting the camera location. You can capture videos that range from 4K (2560 x 1440), HD (1920 x 1080), or SD (1280 x 720) at durations ranging from five to 180 seconds. The higher the resolution and longer duration, the more space each video will occupy on the SD card.

In this mode, the camera will take video and photos simultaneously. The video clip operates at a designated resolution and duration. While it captures the video, the camera will save individual video frames as images for every five seconds of video recorded.

All Stealth Cam cellular trail cameras work in tandem with the Command Pro app. Connecting the DS4K Transmit to the app is simple. Download it from iTunes or the Google Play Store, tap the “+” icon to add a camera, and scan the QR code printed on the camera behind the battery pack. Once the battery, cellular, and account indicators denote a successful connection by flashing green lights on the display, users can control the entire suite of camera settings within the Command Pro app.

You can manage and quickly filter images entirely within the Command Pro app. The integrated filtering presets are incredibly useful for anyone who gets inundated with hundreds of photos due to high-activity locations or managing multiple cameras. Filter presets include buck, doe, turkey, hog, or human and are incredibly accurate for pre-loaded data built into the app. For example, a user can select the “buck” preset and instantly eliminate any images the app doesn’t sense as a buck. If you’re monitoring any unwanted trespassers, select “human” to sift through any picture that contains a person. In addition, the Command Pro app also includes these key features:

This allows the user to display camera locations on satellite imagery within the app.

Display and track camera activity by day, month, and year as a bar graph within the app.

Testing the Stealth Cam DS4K Transmit in the Field

Those specs might seem like overkill at a glance. Let’s face it, you probably just want a rough size and age of the deer showing up in your photos. That’s all the information you need to plan your hunt, right? Maybe.

I spent a lot of time chasing a unique mainframe 6×5 last season. When photographed from the side, the buck’s lopsided rack didn’t stand out from other bucks using the same area, but superior detail sourced from the DS4K helped me identify when he showed up out of nowhere the day after Wisconsin’s firearm season ended. Indeed, any trail camera would have confirmed that a big deer survived nine days of the orange army. But the DS4K’s image quality allowed me to zoom in—without severe pixelation— and identify the buck’s distinct kickers on his G2s. My familiarity with that specific deer’s tendencies, paired with time-sensitive intel, helped me devise a plan that almost resulted in a shot at a true public land giant.

I placed my DS4K on the edge of a bedding area from early October until the season’s final bell rang on January 9. I was pleased that the original batteries lasted through the heart of Wisconsin’s deer season and bone-chilling sub-zero temperatures. I’ve ran other trail cameras for that duration during similar conditions only to find that the camera died. As someone who hunts various pieces of public land scattered across several different states, reliable battery life is crucial for my intel. And remote surveillance that cell cameras provide is a null point when you consider that regular cameras require you to leave your scent when it’s time to check your pictures. The DS4K passed these tests with flying colors, and after the frigid temps and a long season, it still had plenty of juice left in the tank.

I was pleasantly surprised by the added value the Command Pro app provides. Editing your trail camera settings on the fly is a breeze and can be done entirely from your cell phone. Simply tap the “camera setup” icon to manipulate changes to the camera’s timestamp, image resolution, photo bursts and intervals, operating modes, and much more. It’s simple and intuitive enough that even folks who aren’t tech savvy can understand it.

Stealth Cam hit a home run when they designed the body of the DS4K. Most cameras require a padlock in addition to a cable lock to fasten the door shut and secure the camera to a tree. But the DS4K allows the user to simultaneously run a single cable lock through the camera body and door. This design eliminates the need for a redundant padlock or keys that you’ll wind up losing. It also gives the user peace of mind, especially when running an expensive camera in places other hunters frequent.

With that said, I still recommend running your camera at least one stick high. This gets it out of the line of sight from animals or other hunters. The higher angle also yields superior image detail. I’ve also found that I rarely get photos of deer looking straight into the camera, which can’t be said when I’ve mounted them at lower positions on a tree.

What the Stealth Cam DS4K Transmit Does Worst

Despite the advertised 0.2-second detection trigger speed, I noticed more pictures of the rearward portion of a deer than I liked. Admittedly, this performance was specifically displayed in early January after months of deployment on the original battery set. However, my late-season bowhunting strategy revolved around monitoring my hunting areas through cellular trail cameras in order to minimize my impact on those spots. Inconsistent trigger speed can be the difference in seeing just a deer’s backside or being able to clearly identify his headgear.

The DS4K Transmit sits atop the heap of cellular trail cameras with class-leading photo and video quality. The DS4K isn’t the most expensive trail camera, but at around $250, it can get expensive to deploy a lot of them over your favorite hunting area. So, you’ll have to weigh the cost versus performance for your needs.

What the Stealth Cam DS4k Transmit Does Best

The DS4k’s nighttime image quality is outstanding. I’ve used plenty of trail cameras that snap photos after sunset with minimal detail other than a blurry, unidentifiable rack. That’s not the case with the Stealth Cam DS4K, though. The IR yielded a strong contrast of black and white images, which of course, can be toggled to full color with the Command Pro app. Usable data at night is especially useful for folks chasing whitetails on pressured public land since shy, mature bucks rarely show themselves in high-traffic areas during the day. When big bucks finally do make an appearance, it’s critical that your trail camera captures enough detail to differentiate them from others in the area.

Stealth Cam is owned by GSM Outdoors, a powerhouse in the outdoor space that also owns Muddy, TruGlo, Ameristep, Hawk, and many other reputable brands. As someone relatively new to cell cams, I was hesitant to buy from one of the largest outdoor conglomerates, and I assumed customer support would be non-existent at best. After a brief phone call with their customer support team, I quickly found that wasn’t the case. After a brief wait on hold, they quickly connected me to a helpful person who talked me through the setup process. The support technician was clearly a product user, which adds bonus points in my book.

Suppose you’re looking for a cellular trail camera to give you a scouting edge when your time is limited. In that case, the Stealth Cam DS4K Transmit can give you the photo and video intel you need to maximize your time in the woods and hopefully notch your tag on a big buck.