The Tricks to Grunt Calling 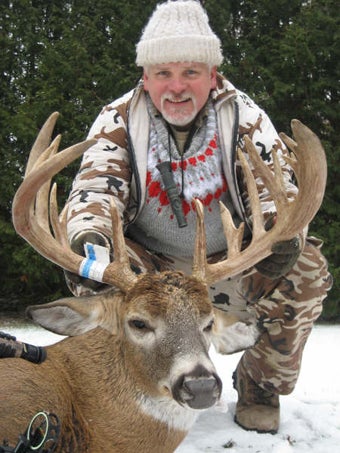 An experience during an early November morning three seasons ago pretty much encapsulates my philosophy on deer calling. With the rut just reaching its peak, the day dawned cold, frosty and still. Perfect. I had saved one of my favorite stands, which overlooked a five-acre fallow field, for just such a morning. I took my stand in the pre-dawn murk expecting great things from the day to come. I was not disappointed.

I saw several bucks that day, but two stand out in my memory as being special. The first was a beautiful 10-pointer–one of the biggest I’ve ever seen–crossing the field about 250 yards away an hour after sunrise. I could tell by his fast, purposeful strides and the fact that he was traveling in a straight line that he was heading to a specific destination. My first two grunts brought no reaction, so I blew a little harder. On the third grunt he stopped and looked my way. My hopes rose, but, alas, it was not to be. After a brief pause, he turned his head and kept right on going. Subsequent grunts seemed to fall on deaf ears.

Changes in Attitude
Two hours later, just as I was about to climb down and call it quits, I spotted another dandy buck. Immediately I could tell this one was different. He was about 150 yards away with his head down, scent-checking a trail on the edge of the weed field. When he lifted his head I could see a wall of long tines!

For sure, that got me going, and his demeanor made things look even better: He was just drifting through the woods, taking his sweet time. It was obvious that this buck had nowhere special to go.

So, I gave him an option. My first grunt brought a head-raised stare. The second grunt started him coming. My heart rate jumped and my arteries flowed with 120-proof adrenaline. The monster was going to come all the way in–I just knew it. I gave him one more soft grunt to focus his attention and then fell silent. I clipped my release on the string and readied for the shot.

In standard wary buck fashion, this guy took a swing out into the weed field before making his final approach. That’s where he hit my scent on the grass, and that’s where the story ends: with him standing 50 yards away, neck-deep in grass and snorting. Thankfully, I did end up getting him three days later from a different stand, but that’s another story.

[pagebreak] Call and Collect
That morning reinforced two important lessons of deer calling. First, it’s nearly impossible to call in a buck who knows where he’s going. Sure, it’s worth trying, but don’t lose faith if he just glances your way. Based on my experience, the success rate on bucks that seem to be headed someplace is horribly low, something like 1 in 10. A buck that’s dawdling and moving slowly, however, is something different. Here, my field notes show that at least 50 percent of those deer end up starting toward me–most come all the way in. Gotta like those odds!

The second lesson of the morning is that simple calls work just fine. In this respect, calling deer is like calling turkeys or ducks: About 95 percent of the game that’s going to come in will respond to a few simple and basic noises. Rhythm, timing and volume are much more important than fancy sequences. In fact, you can actually do yourself more harm than good trying the kind of stuff that deer rarely hear except from hunters. Take it from me: You don’t need to be a master caller to create opportunities. A buck’s attitude is what really determines whether or not he’s going to come to the call. So if he doesn’t respond to the basics, take heart: That buck probably wouldn’t have come to anything.

I prefer to keep it all quite simple, both with the calls I use and the way I use them. For instance, I rarely carry rattling horns. Leaving the horns in the garage may be a handicap on days when I want to reach w-a-a-y out there, but mostly II call to deer I’ve already seen, and a grunt call works just fine for that job. And truthfully, I hate carrying those noisy, clanking rattling horns through the woods.

As for the way I use a grunt tube, I don’t bother with any of the frenzied hyperventilating, alternating-pitch sequences that are the rage in today’s calling instruction. All I use is a series of three basic mid-tone grunts spaced two seconds apart. I’ll let the buck’s reaction tell me what to do next. If he starts my way, I may give him a soft grunt so he knows where to go, but usually I just shut up. If he acts like he didn’t hear me, I call louder. If he hears me but heads away, I repeat the sequence. Find a call that carries a consistent tone whether you blow it softly or loudly. That’s it.

But it’s enough. Over the last two seasons I’ve shot at five nice bucks. I missed one (don’t ask), but the other four ended up in my freezer. Here’s the kicker: I wouldn’t have gotten a shot at a single one of these deer if I hadn’t been carrying a grunt call. In each case, I saw the buck passing out of range and with a simple series of grunts called him to within spitting distance. The grunt tube made my hunts. In fact, I’m so reliant on my call that I even carry an identical spare. When it comes to tipping the odds in my favor, the grunt tube is one of the most important pieces of equipment I carry.