Illinois's handgun ban is being challeneged in the state legislature after a man was arrested for shooting an intruder in his home. 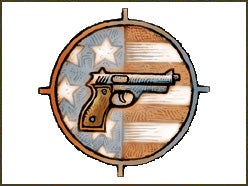 An Illinois man who shot an intruder in his home last December has sparked a debate over a handgun ban in the Chicago suburb of Wilmette. Just before Christmas, Hale DeMar, 54, used a handgun to protect his home and family from a burglar who had entered DeMar’s house twice in 24 hours.

The first night, DeMar huddled upstairs with his children as the intruder rummaged through his possessions on the first floor. By the time police arrived, the burglar was gone, but not before he made off with, among other items, a set of DeMar’s house keys. Little did DeMar know that as he tucked his children into bed the next night the burglar was waiting to enter his house again. This time DeMar took his handgun and confronted the man in his kitchen, where he shot him. The wounded crook drove himself in a stolen SUV to a nearby hospital and was later arrested by police.

A justified shooting, right? Not so fast. Even though the local authorities were unable to adequately protect DeMar and his family, they decided to charge DeMar with violating the town’s handgun ban.

“What is one to do when a criminal proceeds, undeterred by a 90-pound German shepherd, a security alarm system and a property lit up like an outdoor stadium?” DeMar said in a letter to the Chicago Sun-Times. One Illinois state representative, recognizing the absurdity of DeMar’s predicament, has proposed legislation that would override such bans when guns are used in self-defense. But the lawmaker, Rep. John Bradley, who hails from more gun-friendly southern Illinois, knows it is far from certain that his colleagues from the northern half of the state will embrace his legislation.