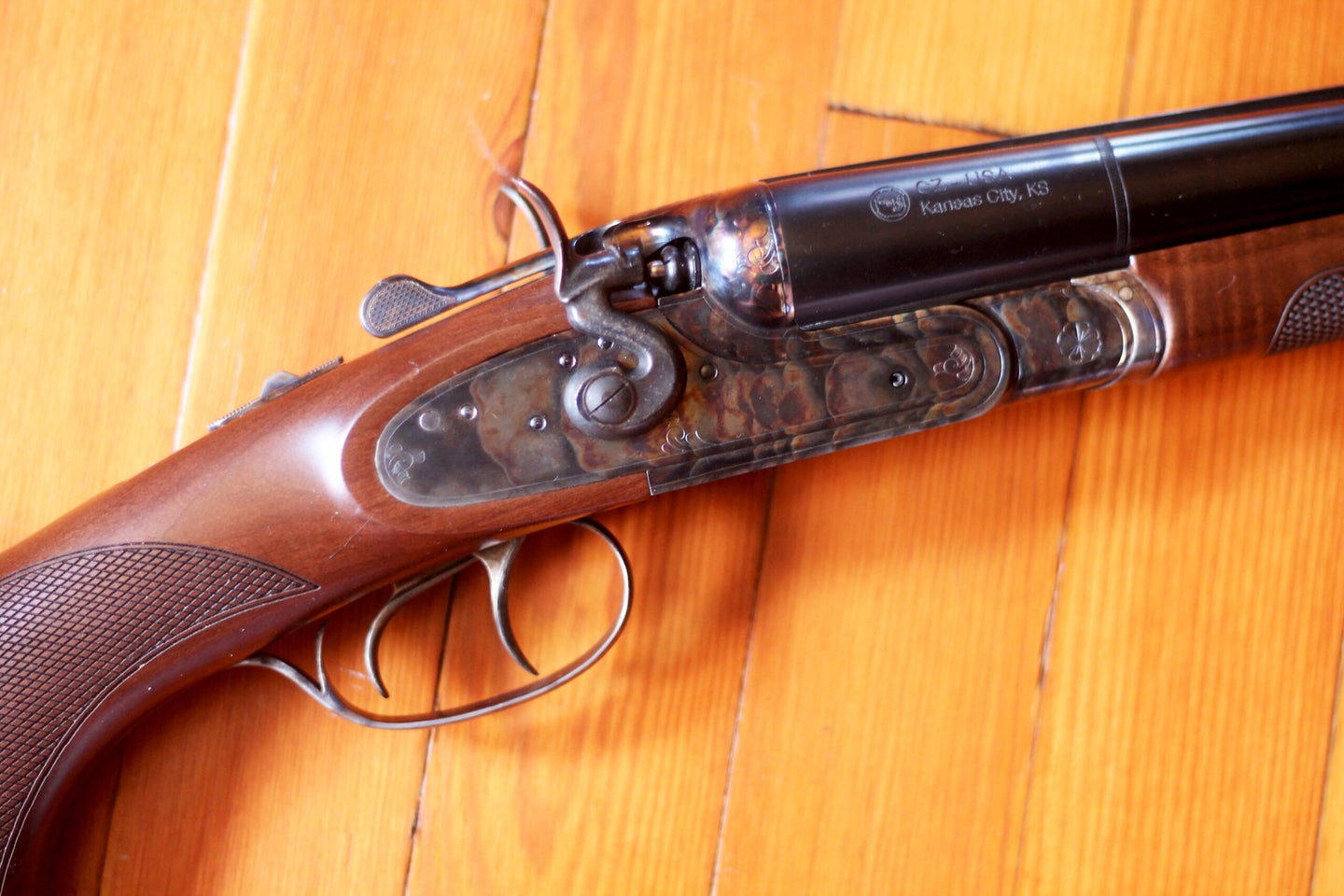 There’s something endlessly attractive about the understated nature of a simple yet effective firearm that has stood the test of time. Unglamorous double barrel shotguns have served as unsung workhorses practically since firearms were invented. On the American frontier, long-barreled shotguns, to the tune of 36 inches, served as game getters, while shorter versions were reserved for defense from dangerous animals on four and two legs.

When you’re talking about a shotgun with a cut-down barrel or stock in a modern context, it’s simply a sawed-off—or, if the ATF and NFA are involved, a Short Barreled Shotgun (SBS). But in the late 19th century, a short-barreled shotty was called a “coach gun.” Today, you can buy nearly authentic coach gun reproductions from a handful of manufacturers. With superb craftsmanship and modern safety features, the CZ Hammer Coach in 12 or 20 gauge is undoubtedly one of, if not the, best available.

Everyone loves a throwback, and the double exposed hammers, color case hardened finish, and double triggers on the Hammer Coach lend authentic styling to a compact shotgun that’s a lot of fun to shoot. Since it’s a Turkish-made CZ, the fit, finish, and function are flawless. It’s a nimble little fixed cylinder choke shotgun that swings fast, shoulders fast, and fires two rounds as quick as you can pull the triggers—just like the frontier defensive guns of the 1800s that it emulates. Despite its old school features, it’s still a plenty effective defensive workhorse inside 30 yards, while also being a tangible glimpse into gun history.

The specs for an Old West coach gun are fairly liberal yet specific. They were generally side-by-side double guns in 12 or 10 gauge, and occasionally 16 gauge, with barrel lengths anywhere from 12 to 24 inches. They came as ready-made guns from factories or were cut down from longer barreled hunting guns by individuals or gunsmiths, as needed. They typically sported exposed double hammers and double triggers.

Compact smoothbores worked as great defensive tools for travelers on roads plagued by bandits and thieves. Such a gun could be brought to bear quickly, pointed easily, and could unleash a significant payload with a decent spread at even close ranges to fend off aggressors on horseback. Shotguns in this role were also called messenger guns. The term originated in the 1858 when Wells Fargo & Co. messengers were outfitted with short Ithaca shotguns to guard stagecoach shipments along the lawless 2,800-mile route from Tipton, Missouri to San Francisco. The stages carried passengers, mail, and gold: Juicy targets for outlaws.

The short barrels allow a gunner to maneuver within the confines of the driver’s box of a stage, and the spread of shot made hitting moving targets while firing from a wooden box that was bouncing along unpaved roads an achievable feat. While repeaters like the original Henry Rifle introduced in 1860 and the later Winchester and Marlin lever guns had capacities of up to 15 rounds, they weren’t nearly as effective as shotguns in this particular role. And in the days of black powder, a double gun was about the easiest firearm to keep functioning reliably through even heavy fouling.

The ability to point and shoot at a moment’s notice with devastating effect remained advantageous as horses gave way to automobiles and the industrial revolution modernized the world, as evidenced by self-defense weapons like the Ithaca Auto & Burglar, the trench guns used by the U.S. military in WWI, and the riot guns utilized by law enforcement in the early 1900s.

If you want a coach gun, you can either pay thousands of dollars for an antique you wouldn’t actually shoot, go the Mad Max route and buy a beater side-by-side with the intention of getting the barrels cut down by a gunsmith, or go for a quality replica like the CZ Hammer Coach.

Built for cowboy action shooters, the Hammer Coach retains the classic features of older double-gun designs while being built with current production methods and including modern safety features. Double triggers fire dual exposed hammers that are a signature feature of a classic coach gun, and the receiver, trigger, and action-release lever sport a lovely and period-correct color case hardened finish. The 20-inch barrels and overall length of 37.3-inch mean this shotgun is within the parameters of a coach gun while still being transferrable as a shotgun with no tax stamp or registration required.

The Hammer Coach comes nicely appointed in a hard case that stores the disassembled shotgun in two pieces, each with its own velvety protective sock. For a simple gun, the HC looks outstanding. The first thing that struck me was the quality of the Turkish walnut stock and how its stained just dark enough to perfectly match the gorgeous case hardening on the steel.

On the skeet range and the firing line, this shotty swings smooth and comes right to the shoulder and eye like it’s drawn by magnets. The 12-gauge model I spent time with weighs in at 6.7 pounds by the spec sheet, and my scale said the same, but with the 20-inch barrel length, the gun is extremely well balanced and comfortable to handle.

Clays that were reasonably slow and close were easily shattered, but anything too fast or too far and I was only clipping them. I attribute this to the short barrels and open chokes, and not my lack of wingshooting ability, though it was probably a bit of both.

On paper, results were more concrete. Patterns with 00 Buck defensive rounds were about 7 inches across at 15 yards, and at 25 yards, I was usually counting all 8 pellets within the torso of a life-size silhouette. The No. 4 Buck 1.75-inch shells opened up a bit more, but I was still landing 10 pellets in the silhouette at 25 yards.

Since the Hammer Coach is going for authenticity, there is no buttpad, just a steel buttplate with a case hardened finish that matches the receiver. It looks great, but I’ll say this: I only ran two 3-inch magnums loads through this gun for a reason, and high ammo prices wasn’t it.

It might feel blasphemous to add a recoil pad to a gun like this, but if you’re going to be shooting it a lot on the regular, it’s probably worth it. If you just want to not kick the hell out of yourself when the urge strikes to drop the hammers on this piece of the past, a slip-on pad would work just fine, or you could just pretend it’s 1870 and cowboy up.

I found the Hammer Coach is an absurd amount of fun to shoot with light kicking 1.75-inch shells. Since I only have one repeating shotgun that runs the little shotshells reliably, I had a good amount in the ammo drawer after a year and a half of very careful and limited range sessions, so I put them to good use. The Federal Shorty #4 Buck and slug rounds do an impressive amount of damage at in-the-room distances with little kick.

Overall, the shotgun handles exceptionally well, and the fit and finish are that of a far more expensive firearm. My only criticism is actually no criticism at all: Everything is extremely tight out of the box, including the action-release lever, the action itself, and even the safety—but that all just means the tolerances are high. Like a quality 1911, it needs a healthy breaking in period before it runs like it should. Even after just a couple range sessions, it started to smooth out a great deal.

The Hammer Coach is beefy without being bulky and when it’s in your hands, you kind of don’t want to put it down—it feels nimble and capable to the extreme.

This gun is plenty of fun at the range and its tailor made for cowboy action shooters, though the extremely stiff action would require the aforementioned breaking-in before it can be a viable competition gun. It could also serve as a competent brush or scrub gun, within limits. The tang mounted manual safety means you can safely have the hammers cocked and ready to fire in the field, which is great, but a lack of choke tubes limits its hunting applications. While the CZ Sharptail Coach offers similar esthetics and dimensions with internal hammers and a single mechanical trigger, it too has fixed cylinder chokes. But hey, you could always get the barrels threaded for tubes by a gunsmith.

As far as self-defense applications go, it’s probably not a great idea to go with the Hammer Coach as a first choice—this goes double for new gun owners. Of course, having this shotgun on hand would be better than having a sharp stick, and all that—but there’s a reason exposed hammer guns are considered antiquated.

If you don’t have the well-trained muscle memory to cock the hammers before shooting and to cock them after reloading, while also minding the manual safety and double triggers during a high-pressure, life-or-death defensive situation, a more modern double gun is a better choice. If, for whatever reason, an exposed hammer shotgun is like an extension of your body, then by all means, make the Hammer Coach your home defense gun. It will perform just fine.

Overall, the CZ Hammer Coach is a wonderful taste of the past. Cocking those hammers will make you feel like Clint Eastwood in Unforgiven or Costner and Duvall at the end of Open Range, if only for a moment, and a range day spent with this scattergun, a lever action rifle, and a single-action six gun is like taking a little trip back in time.